Canada’s economy edged up by 0.1 per cent in January, perhaps the last positive GDP number for some time. On a year-over-year basis, real GDP growth came in at 1.8 per cent, down slightly from 1.9 per cent in December. 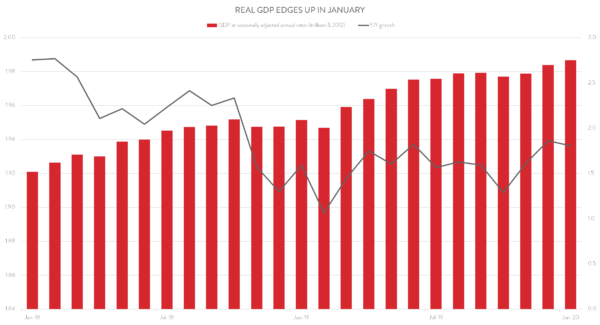 It seems like a lifetime ago, but the coronavirus outbreak was just erupting in China in January, implying that at this time the Canadian economy felt only a modest impact via supply chain disruptions and advisories against non-essential travel. These supply chain disruptions continued to grow in February and, unfortunately, were exacerbated by the CN rail blockades, boding ill for that month’s GDP report. And, of course, the March GDP numbers will be particularly bleak, as large segments of the domestic economy were shutdown to slow the spread of COVID-19 and oil prices collapsed.

The economic gains in January were uneven, as output increased in only 9 of 16 major industries. Manufacturing was the growth leader, as output expanded by 0.8 per cent. Notable increases were also observed in professional services (0.5 per cent), finance, insurance and real estate (0.4 per cent), wholesale and retail trade (0.4 per cent), public administration (0.4 per cent),  and health care and social assistance (0.3 per cent). 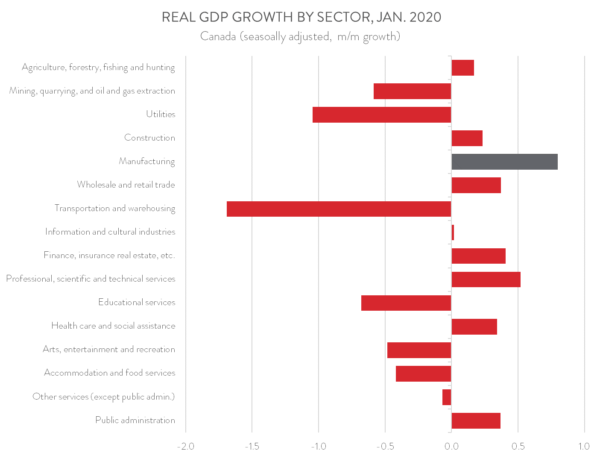 At the same time, educational services output contracted by 0.7 per cent, with the decline attributable to rotating teacher strikes in Ontario. Mining and oil and gas extraction output dipped 0.6 per cent, weighed down by big declines in coal mining, non-metallic mineral mining, and mining support services. Other industries in the red included utilities (-1.0 per cent), arts, entertainment and recreation (-0.5 per cent), and accommodation and food services (-0.4 per cent).

The manufacturing sector posted a solid 0.8 per cent output gain in January, the strongest performance since May 2019. Despite this gain, output was still down 1.1 per cent compared to the same month one year ago.

Unfortunately, the jump in manufacturing activity in January is in the distant past. The ensuring months have been extremely difficult for the industry, as firms grapple with multiple headwinds including growing supply chain disruptions, weak demand for certain products, and liquidity constraints. This is why CME has been working closely with all levels of government to push for relief measures that help manufacturers get through the coronavirus crisis. 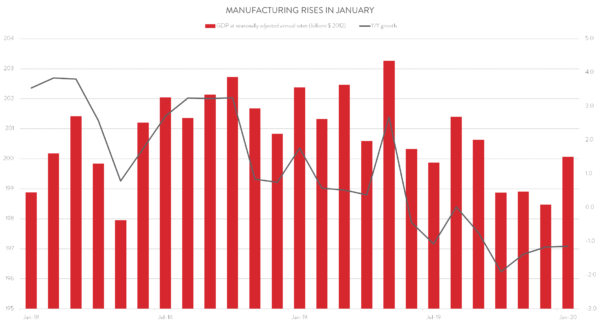 Six of 11 major manufacturing subsectors posted an output increase in January. Machinery saw the biggest gain at 6.9 per cent. Solid gains were also recorded in plastics and rubber products (4.1 per cent), food (3.6 per cent), and paper products (3.4 per cent).

At the other end of the spectrum, motor vehicle and parts output tumbled by 5.3 per cent, weighed down by temporary shutdowns at some assembly plants and the closure of GM’s Oshawa assembly plant. Other industries that saw output fall included primary metals (-4.9 per cent), wood products (-4.1 per cent), and petroleum and coal products (-3.9 per cent). As noted by Statistics Canada, the output drop in petroleum and coal product manufacturing was largely attributable to partial shutdowns at some Canadian refineries for maintenance work. 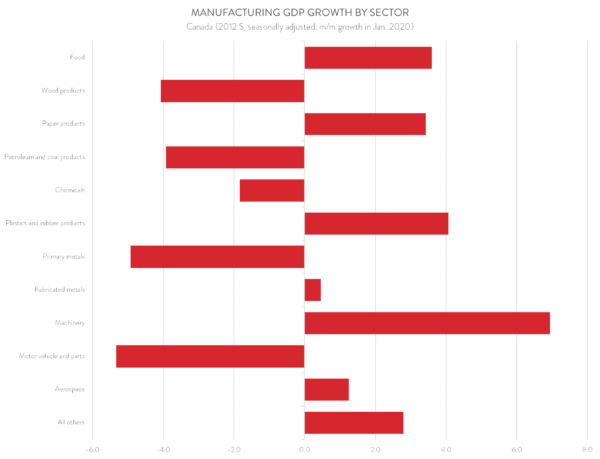