The Canadian economy was flat in April, as a surge in manufacturing value-added activity kept overall GDP from dipping into negative territory. Economic activity expanded by less than 0.1 per cent compared to March – equivalent to an annualized increase of about 0.8 per cent. That rate represents a considerable slowdown from Canada’s relatively strong performance in each of the previous two months. 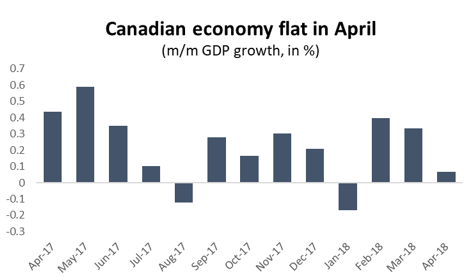 While economic growth has been steadily decelerating for about 12 months now, it remains in relatively solid territory. Last May, the economy was roaring ahead, posting year-over-year growth of nearly 4.5 per cent. GDP growth has since slowed to a little more than half that rate. Even so, GDP is tracking 2.8 per cent higher through the first four months of 2018 compared to the same period last year. For an advanced economy with an ageing population, 2.8 per cent is a respectable economic growth rate. 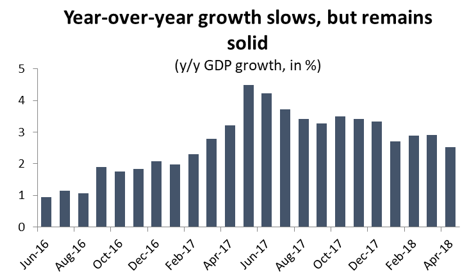 The issue, however, is that we still have to wait two more months to get a sense of the impact of Donald Trump’s steel and aluminum tariffs on the Canadian economy – not to mention the impact of Canada’s retaliatory tariffs set to kick in July 1st, or the possibility of new US tariffs on Canadian autos and parts. As trade tensions between the two countries escalate, there will be an unavoidably negative impact on economic growth in both countries. The impact will undoubtedly be more severe in Canada, of course, given our smaller size and greater dependence on the other market. Challenging days are ahead.

Turning back to April’s GDP numbers, the story at the industry level was solid gains in manufacturing preventing the overall economy from dipping into negative territory. Manufacturing GDP jumped up by about 0.8 per cent in April – equivalent to an annualized increase of more than 10 per cent. If not for the impact of manufacturing, the Canadian economy would have contracted by an estimated 0.02 per cent. 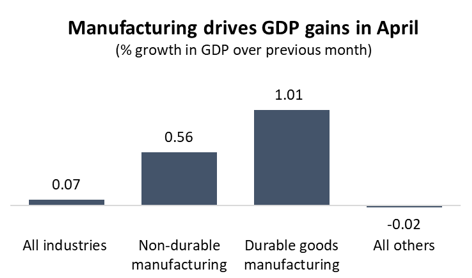 Outside of manufacturing, results in April were mixed. Eight of the other 14 major industrial categories saw lower value-added output for the month, while six posted gains. The largest increase outside of manufacturing was in the utilities sector, where a jump electric power generation, transmission and distribution caused GDP to rise by 1.6 per cent compared to March. There were also solid gains in real estate and related activities; as well as professional and scientific services; and health care. 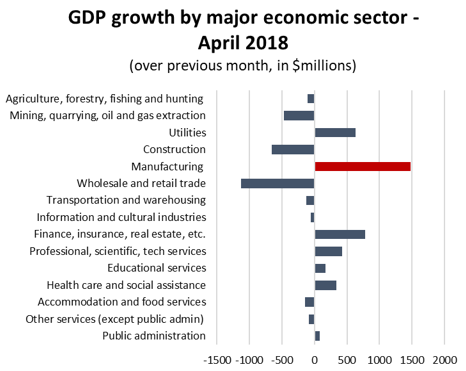 While eight of 15 industry sectors saw GDP fall in April, the losses were heavily concentrated in just three. Retail trade activity plummeted in April, falling by 1.3 per cent (an annualized rate of over 14 per cent) as consumer spending decelerated. The drop was most acute in consumer purchases of motor vehicles and parts, which accounted for about half of the overall retail sales decline. Construction activity was also lower for the second month in a row, while energy and mining gave back some of its gains from March. 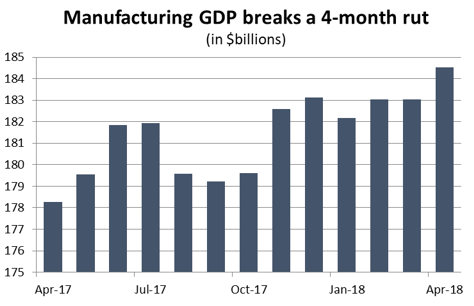 Within the sector, results were almost entirely to the positive. Of the 11 major manufacturing subsectors in Canada, all but one was higher in April. The lone holdout was petroleum refining, where refinery shutdowns in Alberta caused GDP in that industry to fall by nearly 19 per cent compared to March. That decline singlehandedly wiped out close to half of the overall gains in manufacturing GDP for the month. Had petroleum refining activity held steady in April, manufacturing GDP would have jumped by 1.5 per cent. 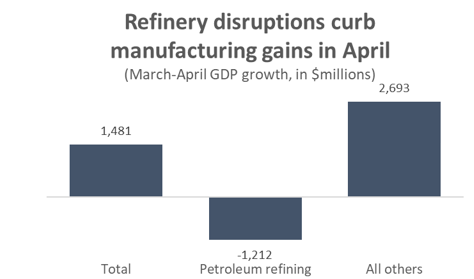 Some smaller manufacturing industries also saw GDP decline in April. Among them were producers of furniture, electrical goods and appliances, and miscellaneous transportation equipment. 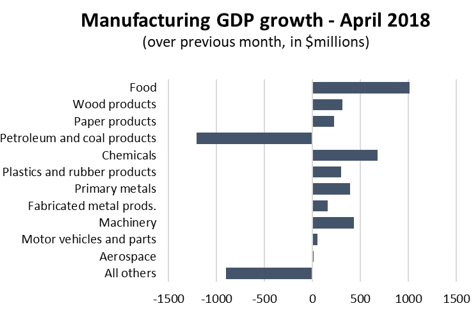 The biggest increase in GDP was in food processing, where a spike in meat products output drove value-added production up by more than $1 billion for the month (a 4.0 per cent increase). Meanwhile, a spike in pharmaceutical and medicine production drove chemicals GDP 4.9 per cent higher in April ($681 million), while machinery production rose by 2.8 per cent ($436 million), recovering most of the losses from a poor showing in March.