EXPORTS INCREASE 1.9 PER CENT IN DECEMBER

Canadian exporters ended 2019 on a positive note. Merchandise exports climbed by 1.9 per cent to $49.3 billion in December, erasing the losses in November. At the same time, imports increased by 0.2 per cent to $49.7 billion. A recovery in December was widely expected, given that trade activity in November was held back by temporary disruptions to rail and pipeline transportation. Unfortunately, this rebound does not change the fact that Canada’s economy expanded at a very soft pace in last year’s fourth quarter. 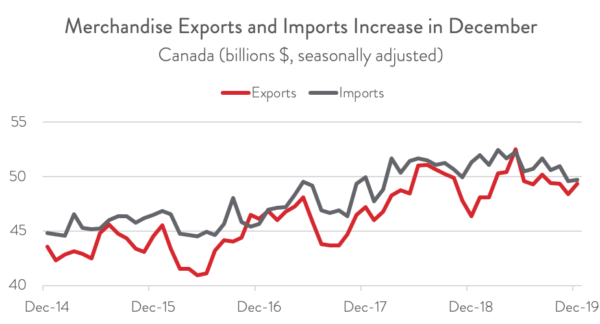 In volume terms, exports expanded by an even stronger 2.8 per cent. At 0.2 per cent, real imports climbed at the same pace as nominal imports.

For 2019, Canadian exports increased by a disappointing 1.7 per cent, weighed down by global trade tensions and cooling global economic activity. This marks a significant slowdown from export growth of 6.3 per cent in 2018 and 5.4 per cent in 2017.

With exports outpacing imports, Canada’s trade deficit narrowed sharply from $1.2 billion in November to $370 million in December, the smallest in seven months. Canada’s trade surplus with the United States widened from $4.1 billion to $5.2 billion. At the same time, our trade deficit with the rest of the world widened from $5.3 billion to $5.6 billion.

On an annual basis, Canada’s trade deficit came in at $18.3 billion. This is the smallest deficit since 2014, when a small surplus was reported. Canada’s trade surplus with the United States reached an 11-year high of $51.6 billion in 2019. 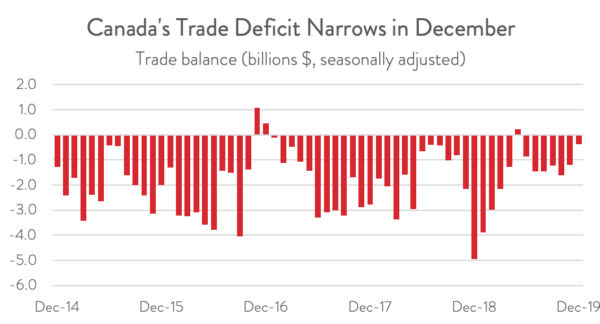 The strong export numbers in December can largely be attributed to a big rebound in crude oil shipments. In fact, excluding energy, the gain in merchandise exports shrinks from 1.9 per cent to just 0.3 per cent. Exports of energy products increased by $822.7 million in December, the biggest gain in 9 months. This largely offset a revised $962 million decline in November, which corresponded with the CN rail strike and a shutdown in the Keystone pipeline following a leak in South Dakota.

Although export gains outside energy were more moderate, they were still widespread. In fact, 7 of the remaining 10 major product types also saw exports climb in December, thanks in part to the resolution of the CN rail strike. Exports rose in metal ores and non-metallic minerals, chemical, plastic and rubber products, forestry products, industrial machinery and equipment, motor vehicles and parts, and consumer goods.

On the negative side, exports of metal and non-metallic mineral products posted a big drop in December, offsetting gains in the prior two months. In addition, exports of aircraft and other transportation equipment and electronic and electrical equipment also fell in December. 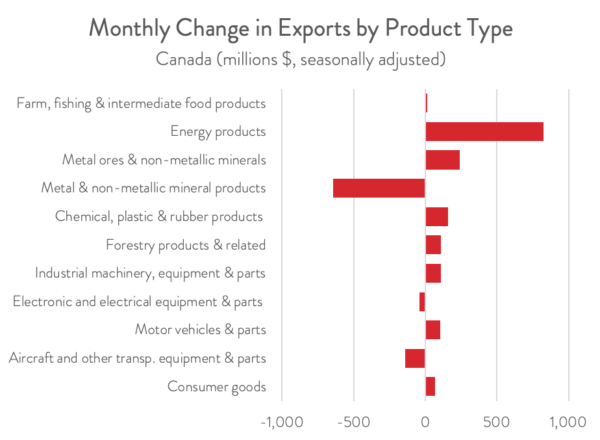 EXPORTS TO THE US SKYROCKET

Exports to the US jumped by $1.055 billion in December, coinciding with the big increase in crude oil shipments. Exports to most other major markets also increased, including the European Union (excluding the UK), China, Japan, and Mexico.

On a negative note, exports to the United Kingdom plunged by nearly $570 million in December, although this followed a record high in November. Exports to South Korea and to all other remaining countries also fell. 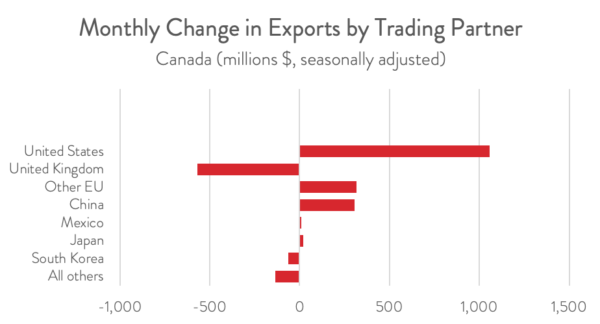