After ending 2017 on a strong note, January was a harsh wake-up call for Canadian labour markets as employment fell to a three-month low, driven down by a sharp decline in the number of part-time jobs. All told, Canada lost 88,000 net jobs, wiping out all of December’s gains, as well as part of November’s increase. 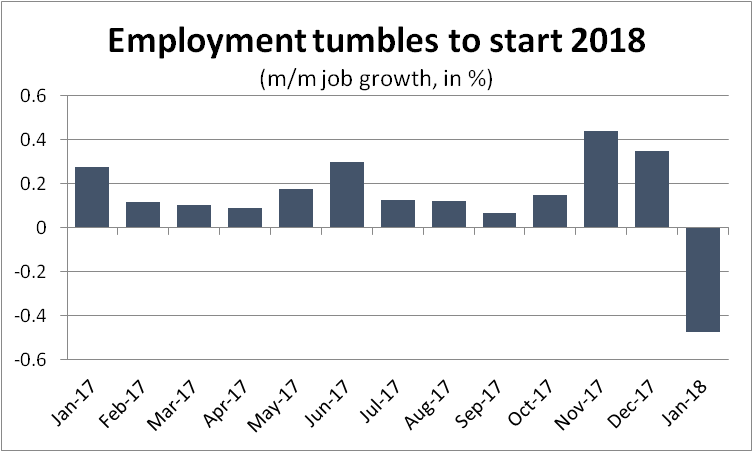 However, those job losses had surprisingly little effect on the national unemployment rate. The jobless rate ticked up only slightly in January, rising from 5.8 per cent to 5.9 per cent. The reason for this was a surprising withdrawal of Canadians from the labour force. Normally, a spike in employment like the one we saw in December would encourage people who had given up looking for work to renew their efforts. The opposite happened this time, as the labour force participation rate fell from 65.8 per cent to 65.5 per cent in January – its lowest level since the summer of 2016.

January’s job losses were entirely in part-time positions. There were actually 49,000 full-time jobs created across Canada last month, but that increase was wiped out by a loss of 137,000 part-time positions. That total represents a 3.8 per cent drop in just one month – a huge decline that drove part-time employment to a 20-month low. 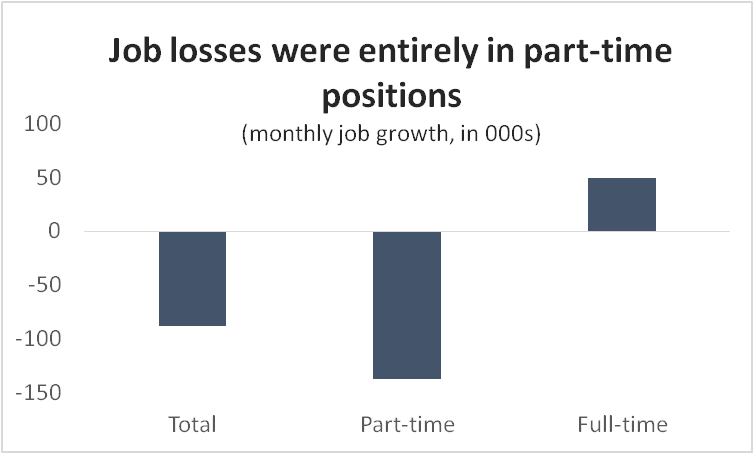 The obvious question here is, was this decline the result of the minimum wage increase which came into effect in Ontario at the start of the year? While it is far too early to draw any firm conclusions on the impact of that change, the answer for now is a cautious “no.” Ontario did see steep declines in part-time employment, but its losses were roughly comparable to those in Quebec and New Brunswick and below those in Alberta and Saskatchewan. Moreover, Ontario is the only province where minimum wage increases kick in on January 1st. Most other provinces raise their wage floors in April or October. 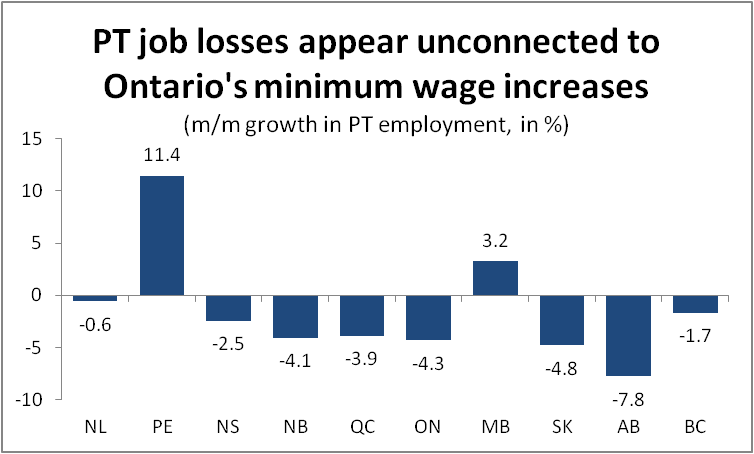 The next most likely explanation is that this is a Christmas effect – businesses add temporary staff in November and December to help with the Christmas rush, but then let those people go in the New Year. There is some weak evidence to support this explanation. Part-time employment did rise in November and December, but the decline in January was far greater than those increases. Moreover, those kinds of effects are usually smoothed out by Statistics Canada’s seasonal adjustments.
At the end of the day, a simple fact remains: one month of fluctuation does not a trend make. It will take at least a few months to see if January’s part-time employment data was a survey anomaly, a temporary phenomenon or something else entirely.

Looking across the country, employment was down in most provinces in January. Leading the way was Ontario, which lost 50,900 jobs – a 0.7 per cent decline compared to December. It is worth nothing that there was a small increase in full-time employment in that province, but those gains were more than wiped out by part-time job losses. There were also relatively steep declines in New Brunswick (5,800 jobs, or 1.6 per cent) and Quebec (17,400 jobs, or 0.4 per cent). On the positive side, there were modest employment gains in Saskatchewan, PEI and Newfoundland and Labrador. 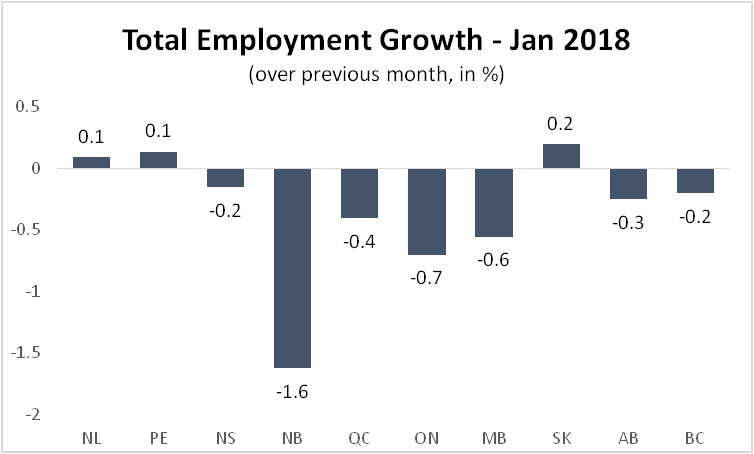 January’s employment losses were also relatively widespread across industrial sectors. Services sector industries lost 71,900 net jobs, with the steepest declines in education (19,600 jobs), professional, scientific and technical services (16,700 jobs), accommodation and food services (11,300), and health care and social assistance (11,200 jobs). This distribution of job losses also tends to support the view that the declines are unrelated to minimum wages. With the exception of accommodation and food services, none of those industries typically pay anything close to minimum wage. 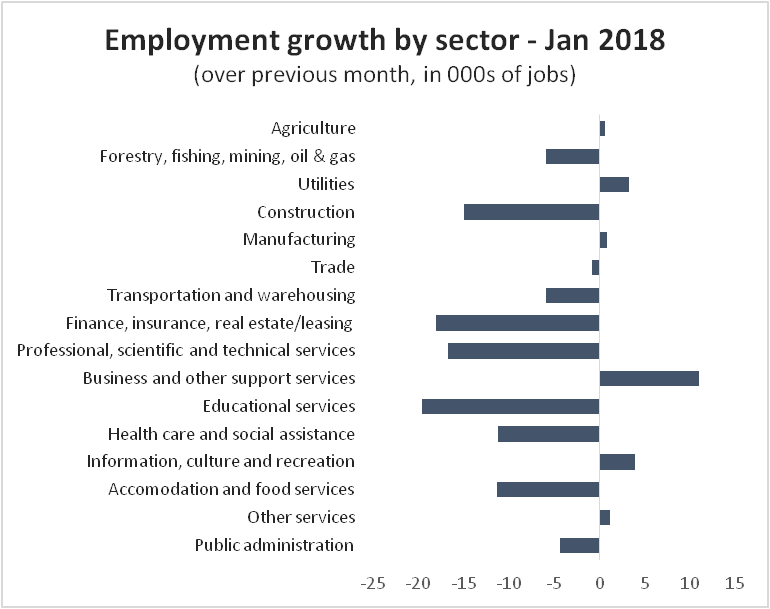 Job losses were slightly less dramatic for goods-producing industries, which shed 16,200 jobs to begin the year. Nearly all those losses came in construction, where employment dropped by 14,900 positions. There was also a notable drop in resource extraction industries (5,900 net jobs lost).
Manufacturing Sector Labour Market

Although January was a sobering month for Canadian labour markets generally, the manufacturing sector was something of an exception. Manufacturing employment rose very slightly, adding 800 net new jobs compared to December. While there has been little growth since November, the total number of manufacturing jobs remains at its highest level since August 2012 and second-highest level in nine years. 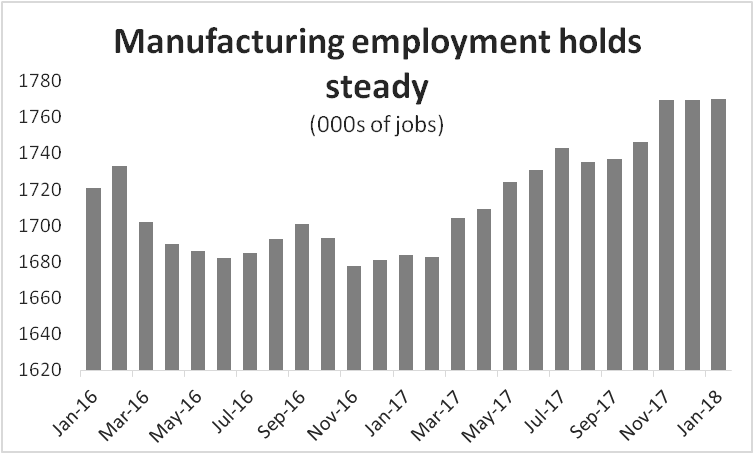 In spite of the slight increase in manufacturing jobs, the unemployment rate in the sector rose slightly in January – from 2.7 per cent to 3.2 per cent. That increase was the result of an influx of workers trying their luck again in the job market. Even so, as noted last month, the jobless rate in manufacturing remains well below what is usually considered to be “full employment” and continues to suggest that businesses are facing severe challenges finding the workers they need.

Unsurprisingly given the small overall job gains in January, results were mixed across the country. On a percentage basis, the largest increase was in Newfoundland and Labrador, where employment rose by 4.9 per cent. After falling steeply through 2016 and into the first quarter of 2017, manufacturing employment in that province has recovered smartly – rising by more than 33 per cent since April 2017. 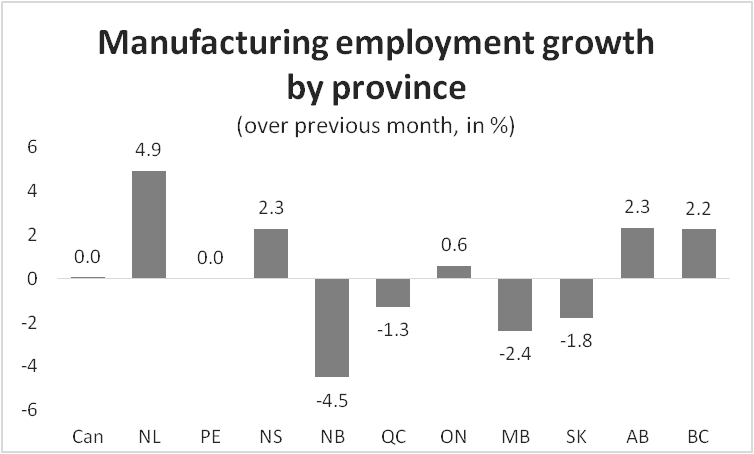