Canadian Job Market Continues to Make Gains, But Pace of Recovery is Moderating

Employment rose by 245,800 (+1.4 per cent) in August, all in full-time work. Over the past four months, the Canadian economy has recovered 1.9 million or 63.5 per cent of the 3 million jobs lost over March and April. 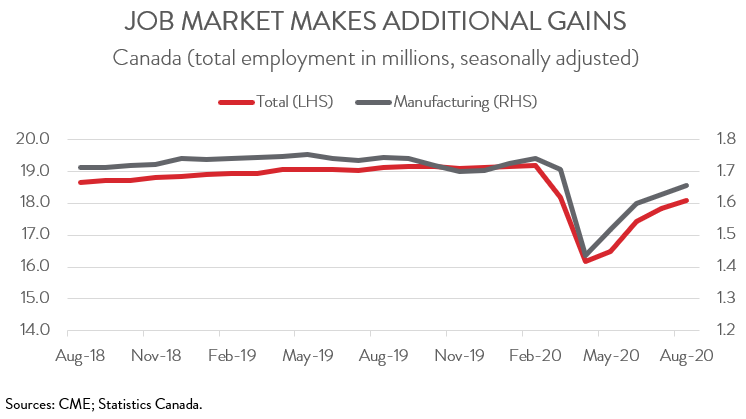 The manufacturing sector continues to recover at an even faster rate. Following cumulative jobs gains of 189,700 between May and July, employment in the sector rose by an additional 29,400 last month. Accordingly, the manufacturing workforce has recovered 219,100 or 72.6 per cent of the 301,600 jobs lost during March and April.

All in all, Canada’s job market continues to heal. In the past four months, it has recovered 1.9 million out of the 3 million jobs lost over March and April. But with the pace of the recovery now slowing, fully recouping the remaining 1.1 million jobs will take much longer.

After increasing by a total of 29.4 per cent between May and July, hours worked in the manufacturing sector rose a further 1.9 per cent in August, and now have recouped over 77 per cent of the pandemic-related losses. This is yet further evidence that the manufacturing labour market is recovering more quickly than that of the all-industry average. 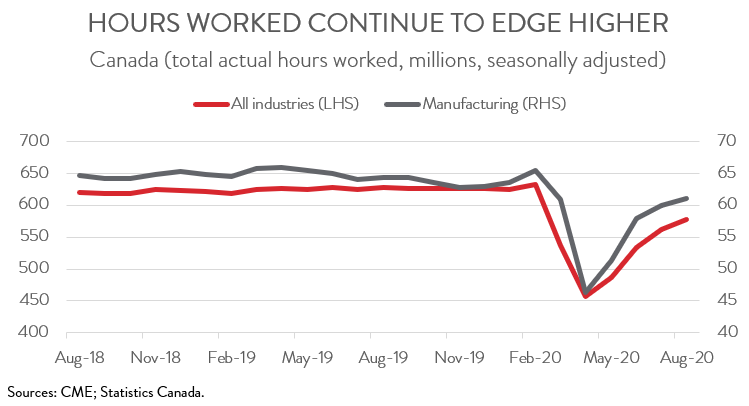 UNEMPLOYMENT RATE MOVES LOWER, BUT REMAINS IN THE DOUBLE DIGITS 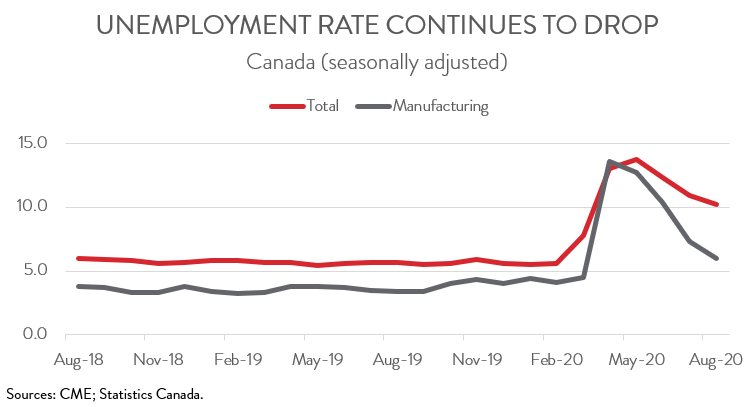 For the second straight month in August, employment rose in every province except New Brunswick. Nearly 80 per cent of the net new jobs created were in two provinces: Ontario and Quebec. Ontario added 141,800 workers to payrolls last month, bringing employment to within 93.6 per cent of its February level. During August, Toronto, the Peel Region, and Windsor-Essex moved into Stage 3 of the province’s reopening plan, joining the rest of Ontario.

Quebec employment climbed by 54,200, building on gains of 576,000 over the previous three months. This pushed employment up to 95.7 per cent of its pre-COVID-19 level. In more good news, August employment growth was entirely in full-time work.

Employment also rose in all western provinces, ranging from a gain of 15,300 in BC to an increase of 4,700 in Saskatchewan. Nova Scotia posted the biggest gain in Atlantic Canada, with employment up 7,200. On the other hand, employment in New Brunswick dipped 700 last month, the second consecutive drop. Nevertheless, despite these declines, the province remains the closest to fully recouping its COVID-19 job losses. Employment in August was 96.4 per cent of its February level. 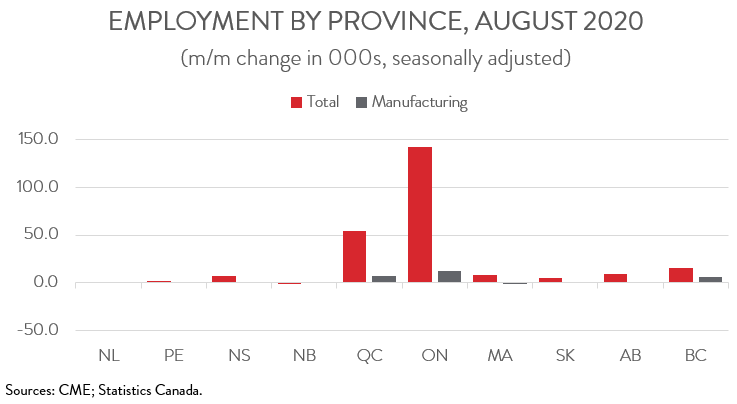