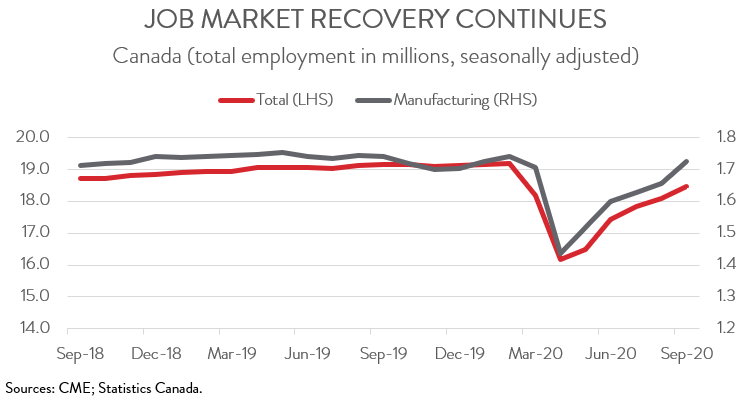 In a nice surprise, Canadian job growth accelerated in September compared to August, far surpassing consensus expectations. As a result, overall employment is now 96.3 per cent from its February level. However, growth in the number of hours worked slowed from 2.9 per cent to 1.9 per cent over the same period, suggesting that the economy actually decelerated last month. At the same time, COVID-19 cases are rising, forcing Quebec and Ontario to reimpose restrictions in virus hot spots. Expect job growth to cool markedly in the months ahead.

The employment gains were broad-based, spanning 14 of 16 major industries. In the goods sector, employment increases were largest in the manufacturing sector. Indeed, manufacturing employment rose for the fifth month in a row in September, up by 68,000. Accordingly, the sector has recovered 95 per cent of its pandemic-related job losses. 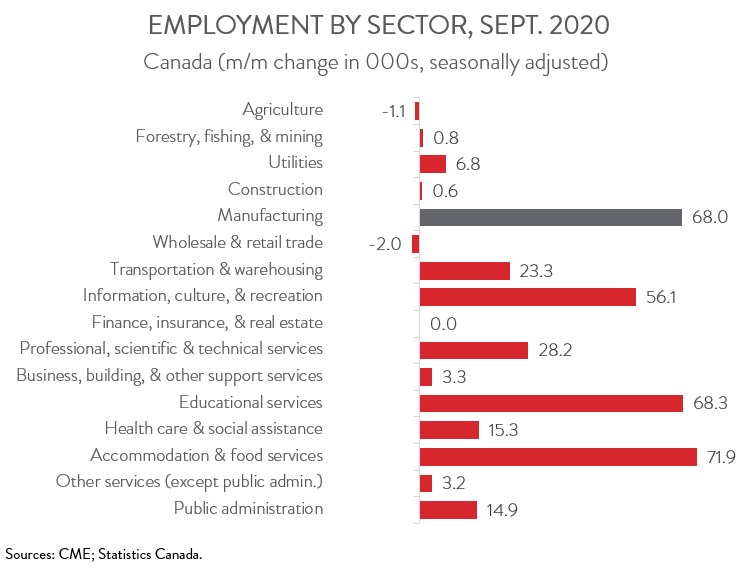 In services, the gains were led by accommodation and food services (+71,900), educational services (+68,300), and information, culture and recreation (+56,100). While this was accommodation and food’s fifth consecutive monthly increase, employment in this industry remains the furthest from a full recovery (-15.3 per cent). In addition, this industry continues to face numerous challenges, especially with the weather getting colder and provinces reimposing restrictions.

The large gain in educational services coincided with students returning to school. Several jurisdictions increased staffing levels to support smaller class sizes and other anti-COVID measures. As a result, employment in the industry was 2.6 per cent above its pre-pandemic level in September.

The unemployment rate fell from 10.2 per cent in August to 9.0 per cent in September, hitting the single digits for the first time since March. This is down from a peak of 13.7 per cent in May, but still well above the February 2020 rate of 5.6 per cent. 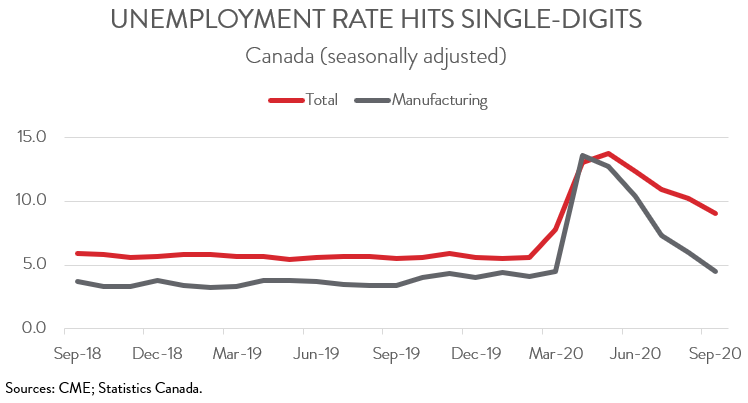 EMPLOYMENT CLIMBS IN 8 OF 10 PROVINCES

Employment increased in every province except New Brunswick and Prince Edward Island in September, with the largest gains in Ontario and Quebec. Ontario added 167,600 workers to payrolls, building on gains of 670,400 over the previous three months. This left employment 4.2 per cent below its pre-pandemic level.

The Quebec economy created 76,700 jobs last month, adding to gains of 630,200 over the previous four months and leaving employment 2.6 per cent below February levels. Manitoba, which recorded 15,100 job gains in September, is the province that is closest to a full recovery (-1.8 per cent), while Alberta, which saw employment rise by 38,200 last month, is the farthest (-5.4 per cent).

As in Ontario, manufacturing employment was above its pre-pandemic level last month in Newfoundland and Labrador (+12.2 per cent), PEI (+11.3 per cent), and BC (+5.2 per cent), while remaining below in the six other provinces. Like with the overall economy, Alberta (-12.1 per cent) remains the farthest from a full recovery in manufacturing. 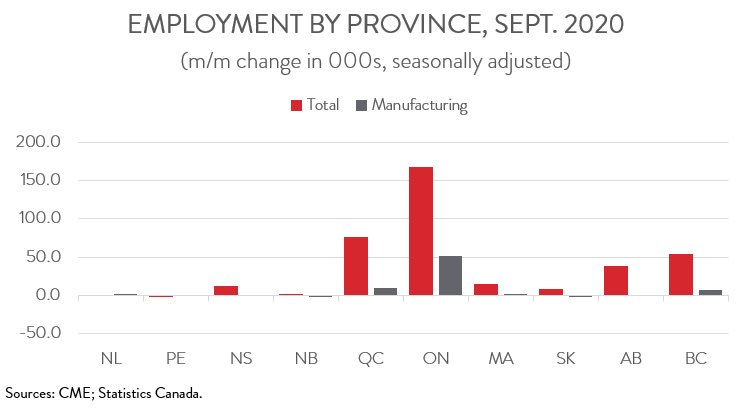