Employment rose by 83,600 (+0.5 per cent) in October, the slowest increase since the recovery began in May. Last month’s gain brought employment to within 636,000 (-3.3 per cent) of its February level, with the Canadian economy recovering close to 80 per cent of its pandemic losses. 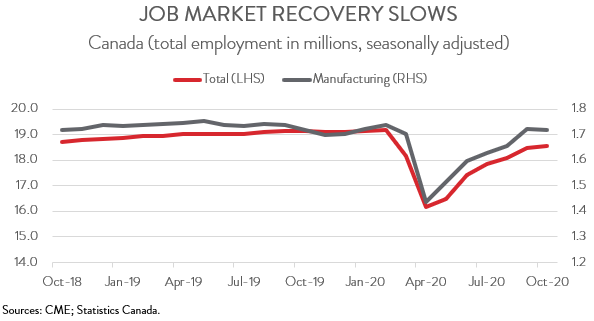 As expected, Canadian job growth slowed sharply in October, with losses concentrated in pandemic-exposed industries as new restrictions were implemented in virus hot spots. With several provinces struggling to contain a second wave of COVID-19 infections, the labour market recovery will remain fragile and patchy in the months ahead.

On the negative side, the manufacturing sector experienced net job losses of 4,300 in October, its first decline since the recovery began in May. But even with this decline, the sector has still recovered 94 per cent of its COVID-induced job losses, a quicker recovery than that of the overall economy. 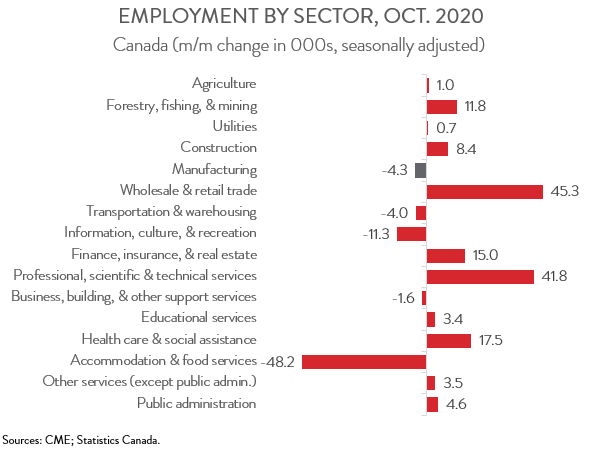 The biggest losses occurred in industries most affected by the reintroduction of public health restrictions, including a net decline of 48,200 in accommodation and food services. This is also the industry that has recovered the least, with employment in October 19.2 per cent below its February 2020 level. At the same time, employment was down in information, culture and recreation (-11,300) and in transportation and warehousing (-4,000).

UNEMPLOYMENT TICKS DOWN A NOTCH 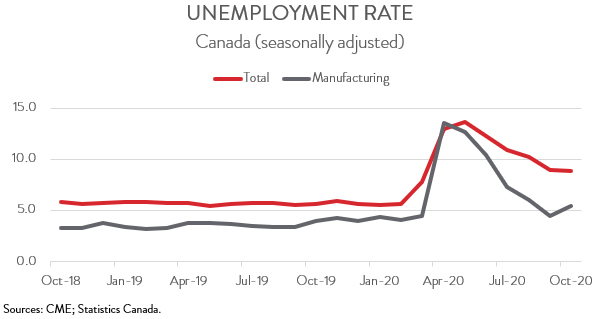 EMPLOYMENT UP IN 7 0F 10 PROVINCES

Employment increased in 7 of 10 provinces in October. BC (+33,500), Ontario (+30,600), and Alberta (+23,400) posted the largest gains. Ontario’s gain came despite the fact Toronto, Peel, and Ottawa were moved back to modified Stage 2 restrictions on October 10. Quebec was not as lucky. It saw overall employment fall by 12,900, as the province raised the public alert level in Montreal and Quebec City to “red” on October 1. In fact, Quebec was responsible for the lion’s share of the national decline in accommodation and food services employment. Meanwhile, employment was also down in Manitoba (-1,800) and Saskatchewan (-1,600).

As noted by Statistics Canada, among the four most populated provinces, employment was closest to February 2020 levels in British Columbia (-2.4 per cent) and Quebec (-2.9 per cent), and farthest in Ontario (-3.8 per cent) and Alberta (-4.4 per cent). 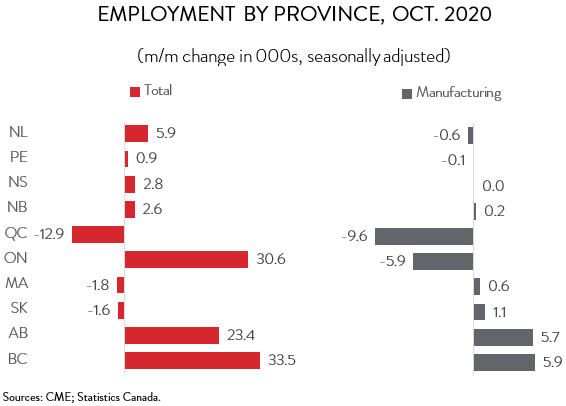