Canada’s labour market recovery stumbled in December, with employment falling by 62,600 (-0.3 per cent). This was the first decline since April. With these losses, employment last month was 3.3 per cent off its pre-pandemic level. 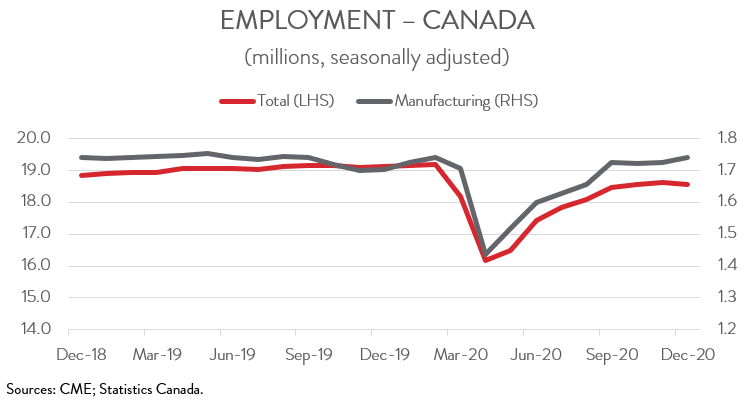 The Canadian economy is being hit hard by the second wave of the COVID-19 pandemic and renewed public health measures. Unfortunately, these restrictions are likely to remain in place or even tighten until a sufficient proportion of the population is vaccinated. Brace for a tough winter ahead.

Employment fell in 8 of 16 industries, and not surprisingly, the bulk of the losses were concentrated in services industries facing COVID-19-related restrictions. Accommodation and food services employment declined for the third consecutive month, falling by 56,700. As of December, employment was 25.8 per cent below its February 2020 level, making it the hardest-hit industry by a wide margin.

Employment in information, culture and recreation also declined for the third month in a row, down 18,800, as some provinces tightened public health measures at gyms, theatres, and other related businesses. This sector’s level of employment in December was 12.9 per cent below where it was in February.

Finally, the other services sector, which also includes businesses affected by public health measures like hair and beauty salons and religious services, experienced its first net job loss since April. Employment declined by 30,800 or 4.0 per cent in December, with the lion’s share of losses occurring in Ontario and Quebec. 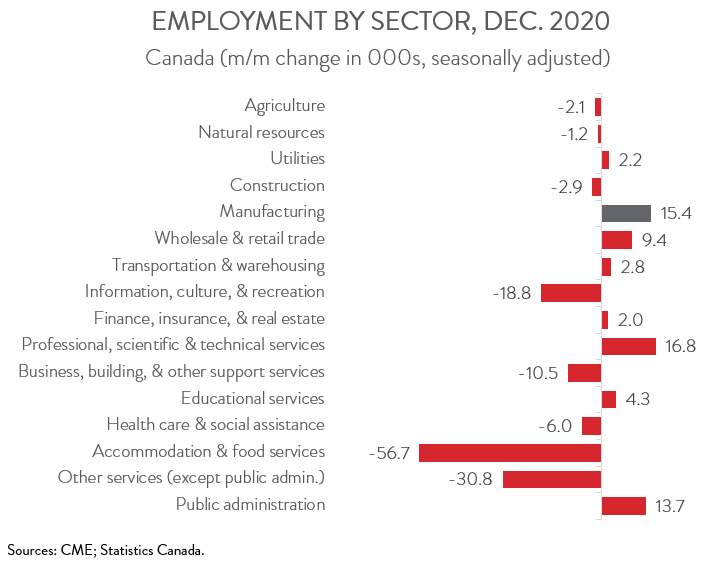 On a positive note, manufacturing employment climbed by 15,400 (+0.9 per cent), its seventh increase in eight months. With this gain, the sector has fully recouped all its pandemic-related job losses. However, with the economic recovery faltering and COVID-19 infections rising, such job growth will be difficult to sustain in the coming months. CME will continue its political outreach across the country to ensure manufacturing remains open as an essential service.

The unemployment rate edged up from 8.5 per cent in November to 8.6 per cent in December, its first increase in seven months. The decline in employment was mirrored by a similarly sized drop in labour force participation, thus limiting the increase in the jobless rate.

In contrast, the unemployment rate in the manufacturing sector fell from 5.8 per cent to 4.9 per cent. This leaves the industry’s jobless rate 0.8 percentage points above where it was in February 2020. 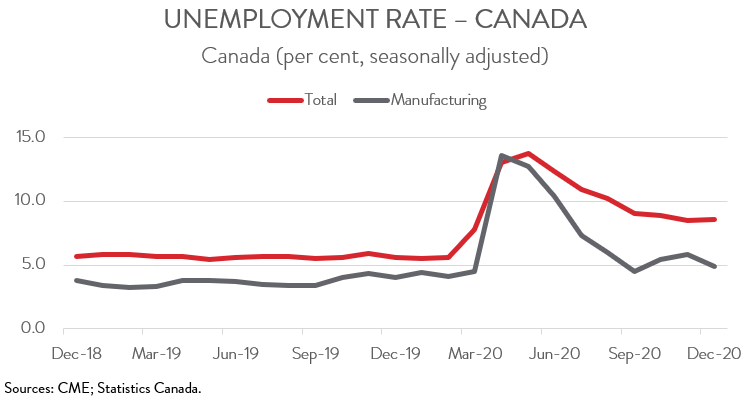 EMPLOYMENT DOWN IN 9 OF 10 PROVINCES

The drop in employment was widespread, spanning 9 of 10 provinces. Quebec, which has had tighter public health measures in place since October, saw employment decline by 16,800 in December. The bulk of the job losses occurred in the Montreal metropolitan area, where red zone restrictions have remained in effect.

It was a similar story in Ontario, where employment fell by 11,900. The losses were concentrated in the Toronto metropolitan area, as the City of Toronto and the Region of Peel moved into the grey lockdown zone on November 23.

Alberta also saw payrolls fall by 11,900 last month. According to Statistics Canada, declines were most pronounced in information, culture and recreation, in construction, and in accommodation and food services.

BC bucked the trend, posting a modest increase in employment of 3,800. Job growth was particularly strong in construction, and this helped offset a notable decline in accommodation and food services.

The story in manufacturing was mixed, with employment up in five provinces, down in four, and stable in one. Ontario (+16,400) boasted by far the biggest increase last month, with other provinces posting more modest gains. Among the provinces that experienced a drop in manufacturing employment, the largest loss was registered in Newfoundland and Labrador (-2,000). 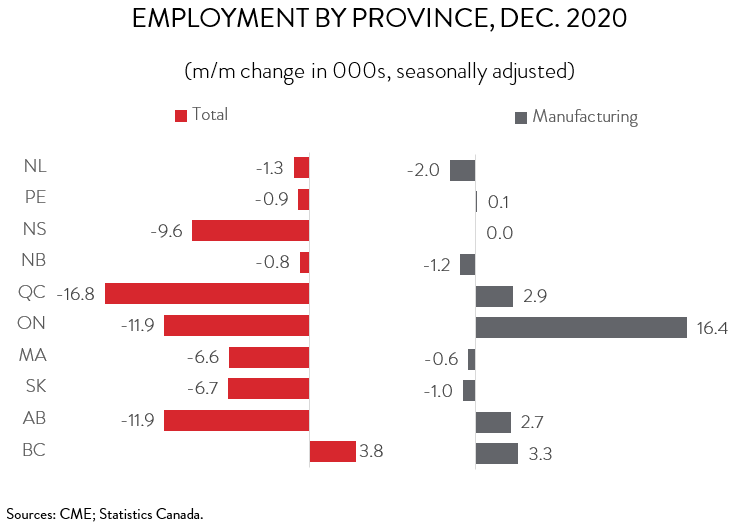