Canada Sheds Jobs for Second Month in a Row 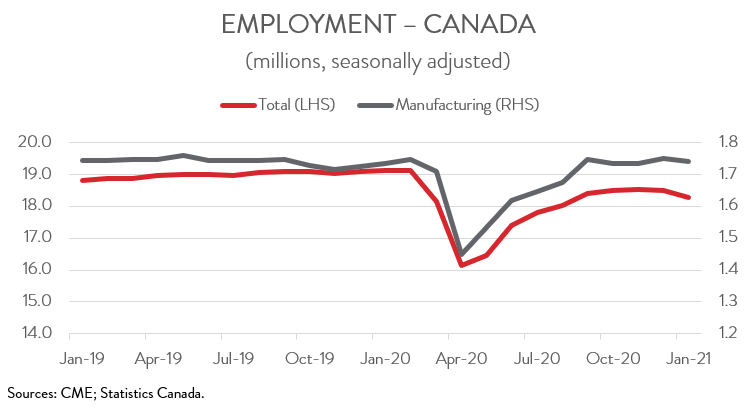 Although no one was surprised to see employment fall in January, the magnitude of the decline came in well above expectations. True, cases of COVID-19 infections are trending down, and some provinces are preparing to loosen restrictions, but the emergence of more contagious variants of the virus threaten to undo progress. Unfortunately, Canada’s labour market recovery will likely be bumpy until the vaccine rollout accelerates and COVID-19 is brought under control.

Employment fell in 8 of 16 major industries, with declines most pronounced in four services-producing industries most affected by new and continuing public health restrictions. In particular, the retail trade sector took heavy losses last month, resulting in wholesale and retail trade employment plummeting by 167,600. Employment also fell in accommodation and food services (-75,000), information, culture and recreation (-16,500), and other services (-8,800). The accommodation and food services sector has taken the biggest hit during the pandemic—employment in January was nearly one-third below its February 2020 level.

The manufacturing sector shed jobs for the first time in three months, with employment down 12,300. However, despite this decline, employment in January still matched its level from a year ago. Job losses were also seen in educational services (-12,900), in agriculture (-6,500), and in business, building and other support services (-5,400). 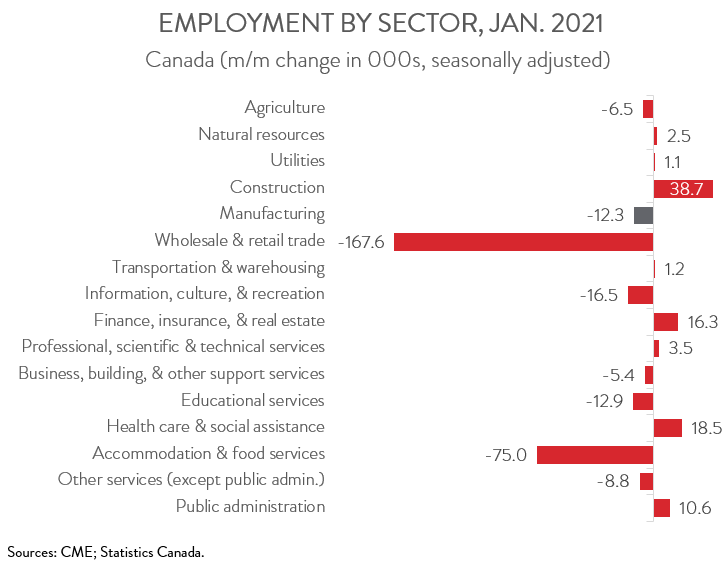 On the positive side of the ledger, employment in the construction sector jumped by 38,700 in January. This increase brought employment to within 3.9 per cent of its February pre-pandemic level. The number of people working in health care and social assistance also rose solidly last month, up 18,500. 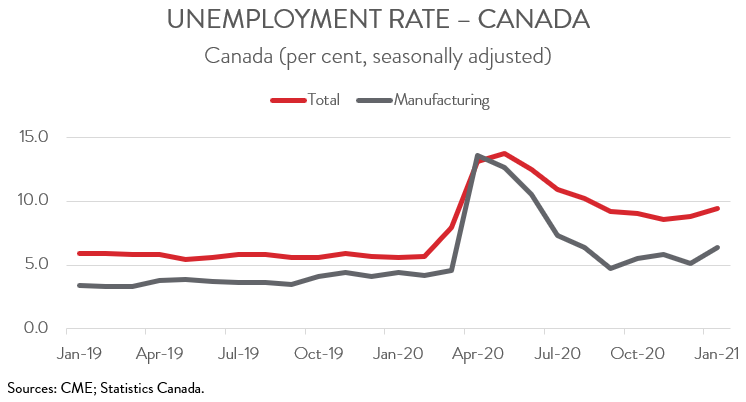 Employment was down in just 3 of 10 provinces, with losses concentrated in Quebec and Ontario. Employment in Quebec fell by 97,900, as non-essential businesses were affected by closures starting on December 25th and a curfew beginning on January 9th. Similarly, Ontario saw employment drop by 153,500, as restrictions already in place for many regions of southern Ontario were extended to the rest of the province starting on December 26th. The retail trade sector accounted for the bulk of the losses in both provinces.

Among the seven provinces that posted gains last month, the biggest increases were in Alberta (+20,800), Nova Scotia (+7,800), and Manitoba (+5,500). The gains in Alberta were driven by the construction industry, which more than offset declines in accommodation and food services.

The lion’s share of the job losses in manufacturing took place in Ontario, with 17,700 positions eliminated last month. However, despite this decline, manufacturing employment in the province remained 1.6 per cent above its pre-pandemic level. In contrast, Quebec saw the biggest increase in manufacturing payrolls, adding 6,500 new jobs last month. 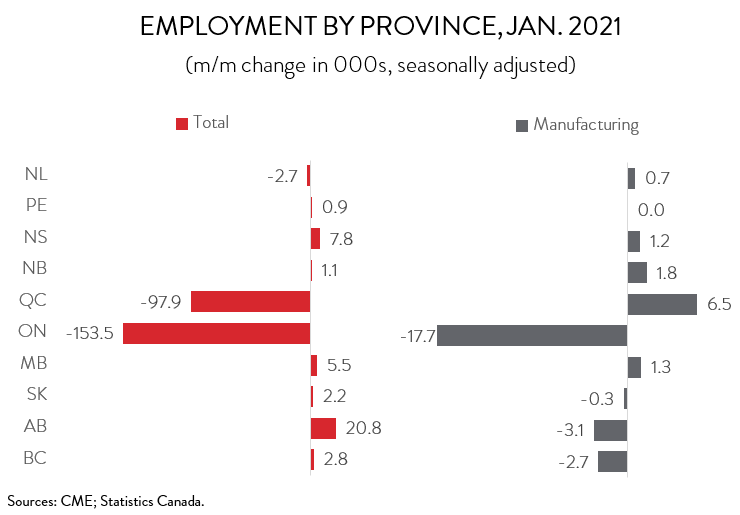