Employment rose by 259,200 (+1.4 per cent) in February, following consecutive monthly declines totalling 265,500 (-1.4 per cent) over December and January. However, even with this gain, about 600,000 Canadians who lost their jobs during the pandemic still had not returned to work as of February 2021. Also, about 406,000 more people were still working less than half their usual hours. 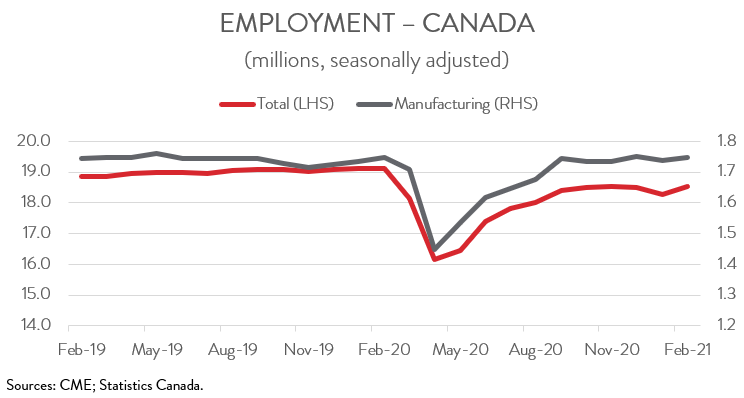 The job market rebound in February came as no surprise, as it coincided with the easing of public health measures in many provinces. That said, the magnitude of the increase was much larger than expected. This provides further evidence that the Canadian economy fared better than expected during the first quarter. However, more transmissible variants of SARS-COV-2 appear to be taking hold in some regions, raising the spectre of a third wave and another round of localized restrictions. This suggests that Canada’s labour market recovery will remain bumpy until a sufficient proportion of the population is vaccinated.

Employment increased in 11 of 16 major industries in February, and not surprisingly, the bulk of the gains were in high-contact services that reopened following the easing of COVID-19-related restrictions. Retail trade led the way, with employment rising by 122,000 (+6.1 per cent). This gain represented a recovery of more than three-quarters of the employment losses in January. 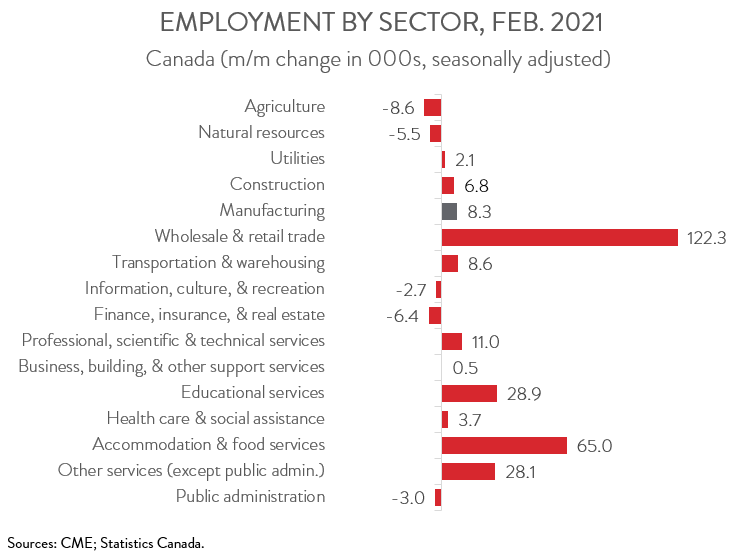 The “other services” industry added 28,100 workers to payrolls, the first increase since September 2020. This sector includes personal care services, such as hairdressers, which were permitted to re-open in several provinces in early February.

After shrinking by 12,300 (-0.7 per cent) in January, manufacturing employment increased by 8,300 (+0.5 per cent) in February. With this rebound, the sector’s employment returned to its pre-COVID level.

The unemployment rate fell from 9.4 per cent in January to 8.2 per cent in February, the lowest point since March 2020. The jobless rate in the manufacturing sector also declined over the same period, falling from 6.4 per cent to 5.1 per cent.

On a negative note, the number of long-term unemployed—people who had been looking for work or been on temporary layoff for 27 weeks or more—continue to make up a growing share of the unemployment pool. This is bad news because generally, the longer someone is unemployed, the harder it is for that person to get another job. 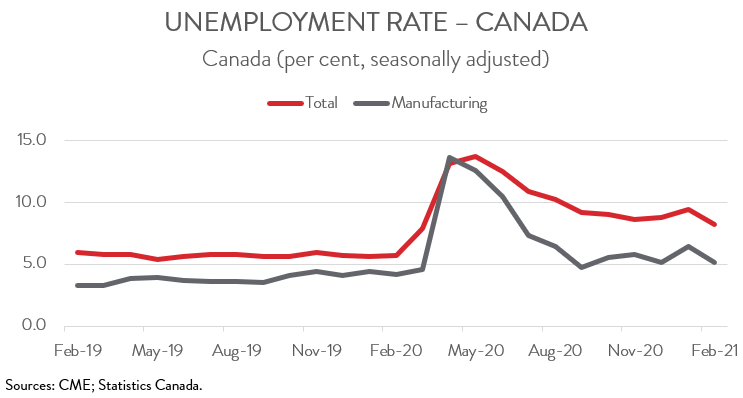 Employment was up in 7 of 10 provinces in February. Ontario and Quebec were responsible for the bulk of the gains, one month after suffering the lion’s share of the losses. Employment in Quebec increased by 112,600 (+2.7 per cent). The gain was mainly in part-time work, with retail trade contributing most to the increase. Ontario added 100,300 (+1.4 per cent) jobs. Like Quebec, the jobs created were mostly part-time, with significant increases occurring in accommodation and food services and retail trade.

Employment also rose in BC (+26,600), Alberta (+16,800), and Manitoba (+16,200). On the negative side, employment fell by 15,000 (-6.8 per cent) in Newfoundland and Labrador, the second consecutive monthly decrease. Last month’s decline in Newfoundland and Labrador was expected, as the province was placed in lockdown on February 12. Employment was little changed in the remaining provinces. 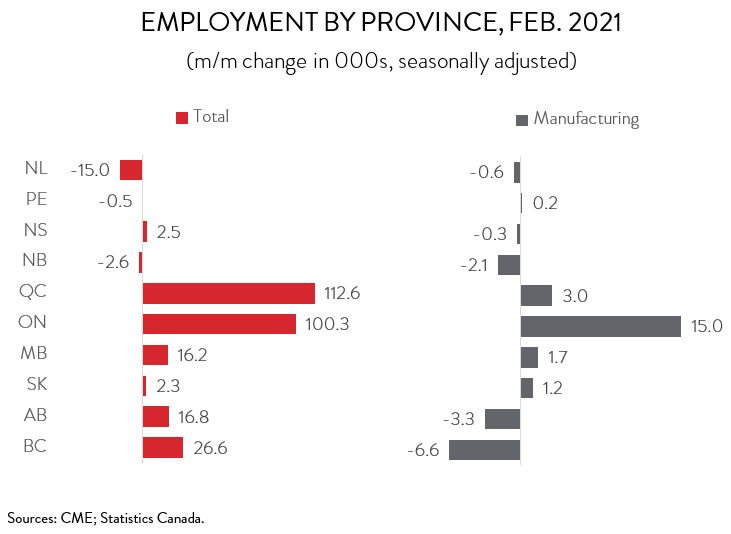