Canada’s Job Market Recovery Accelerates in March, But a Setback in April Looms

Canada’s job market recovery accelerated in March, with the month’s gains surpassing February’s already robust growth. In fact, with these gains, the job market delivered the strongest two-month performance since last summer’s economic reopening. That said, employment growth has clearly been lifted by the easing of public health restrictions in several provinces. And, with these re-openings being hastily reversed as more transmissible variants of the coronavirus usher in a third wave, Canada’s job market is likely to suffer a setback in April.

Employment gains in March were widespread, spanning 12 of 16 major industries. Once again, some of the largest increases came in industries most affected by the easing of public health restrictions. Employment in retail trade rose by 95,000, fully recouping the remainder of the losses sustained in January. The information, culture and recreation sector added 61,500 workers to payrolls, the first increase since September. As well, employment in accommodation and food services rose for the second straight month, up 21,400. Despite these consecutive monthly gains, the sector remains the furthest from a full recovery, with employment in March 24.4 per cent below the pre-pandemic level. 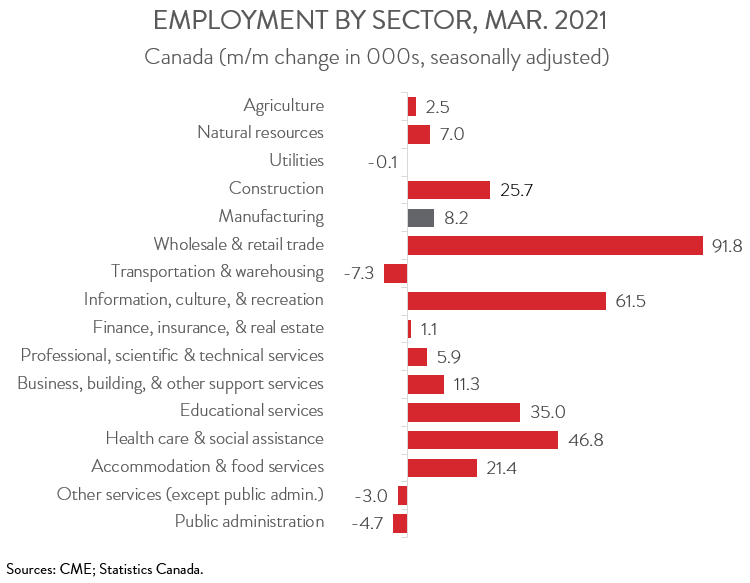 The number of people working in educational services increased by 35,000 last month, building on the 28,900 jobs created in February. It should be noted, however, that part of this increase was due to spring break being moved to mid-April in Ontario.

Manufacturers added 8,200 workers to payrolls in March, closely mirroring the 8,300 jobs created in February. With the latest gain, manufacturing employment climbed to 1.76 million, the highest level since May 2019.

UNEMPLOYMENT RATE FALLS TO LOWEST POINT SINCE START OF PANDEMIC

The unemployment rate fell from 8.2 per cent in February to 7.5 per cent in March, the lowest level since February 2020. Meanwhile, the jobless rate in the manufacturing sector inched up from 5.1 per cent to 5.2 per cent over the same period. 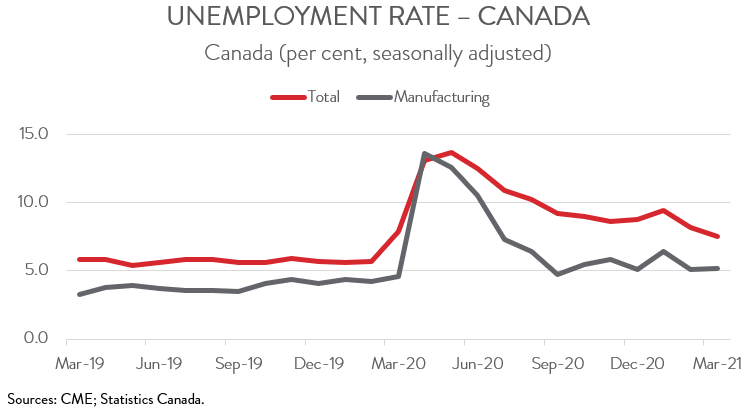 All provinces except Saskatchewan posted job growth in March. Employment in Ontario rose by 182,300, accounting for about 60 per cent of the national increase. The gains were broad-based across industries, with retail trade adding the most workers.

After increasing by 112,600 in February, employment in Quebec climbed a further 25,900 in March. Last month’s job growth occurred outside Montreal, as the province’s largest metropolitan area was still under tight public health restrictions during the labour force survey’s reference period.

In Western Canada, employment was up in Alberta (+37,100), British Columbia (+35,000), and Manitoba (+6,300), while it was unchanged in Saskatchewan. On the east coast, Newfoundland and Labrador boasted the strongest job growth. Employment there rose 13,400 in March, as lockdowns imposed in February were lifted.

BC accounted for the bulk of the job gains in manufacturing, with employment increasing by 6,600. Manufacturers also added workers to payrolls in Quebec (+2,200), Newfoundland and Labrador (+1,300), and Alberta (+1,200). On the negative side, notable manufacturing job losses were seen in Ontario (-2,400) and Saskatchewan (-1,300).

BC has boasted the strongest job growth in manufacturing since the recovery began in May 2020. As of March, manufacturing employment in the province was 5.6 per cent above the level of February 2020. At the other end of the spectrum, Alberta’s manufacturing sector is the furthest from a full recovery, with employment in March 12.0 per cent below the pre-pandemic level. 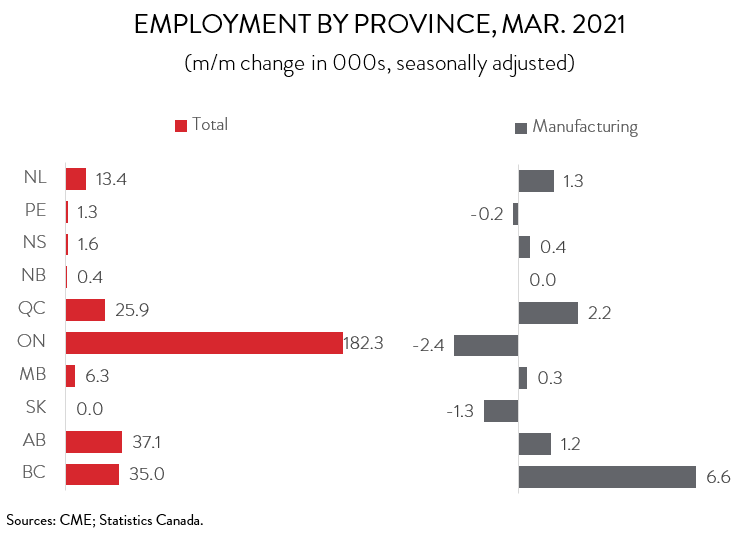