After a record-setting April in which the Canadian economy added more than 100,000 jobs, it would be normal to expect employment to level off or even fall slightly. That was not the case. There were reasonably healthy job gains in May, underlying indicators were strong, and the unemployment rate fell to a new modern-era low.

The Canadian labour market has been a shining light in an economy that has so far been sputtering through 2019. All told, there were about 27,700 net new jobs created in May. That number is fairly modest for an economy that employs 19.1 million people – equivalent to an increase of about 0.1 per cent – but considering the job surge in April, any subsequent increase at all is pretty notable. 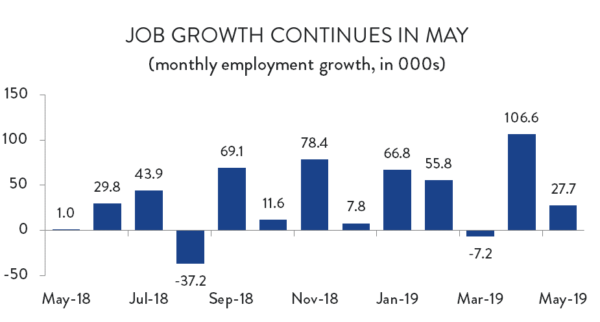 Although 27,700 jobs doesn’t represent runaway growth, the unemployment rate nevertheless fell to a new low – largely because fewer Canadians were actively looking for work last month. The labour force participation rate dropped from 65.9 per cent to 65.7 per cent. That pushed the unemployment rate down to 5.4 per cent – its lowest level on record, with data going back to 1976. 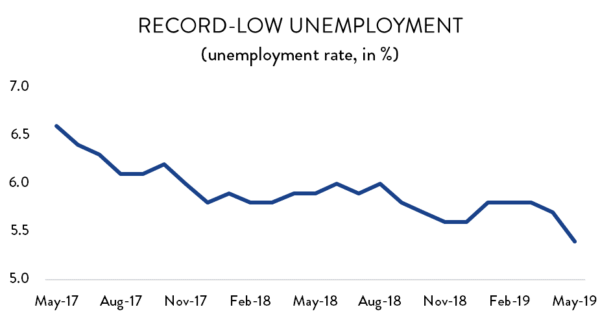 Solid job gains in 2019 has been driving improvements in one of the more basic (but overlooked) labour market indicators. The employment rate (the share of working-age Canadians with a job) rose to 62.2 per cent – its highest level since January 2009. 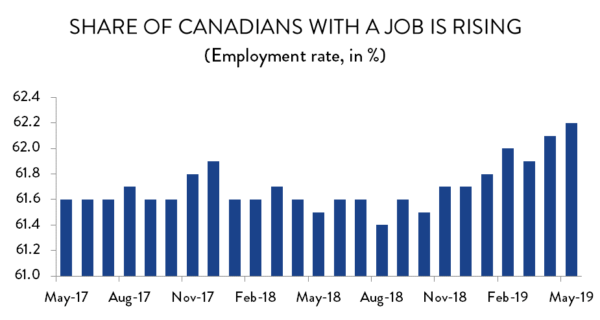 Solid job creation and low unemployment are continuing to put modest upward pressure on wages in Canada. After bottoming out last November, wage growth has been slowly accelerating and has risen in five of the last six months. In May, average hourly wages were 2.8 per cent higher than they were 12 months earlier – an increase from 2.5 per cent in April. 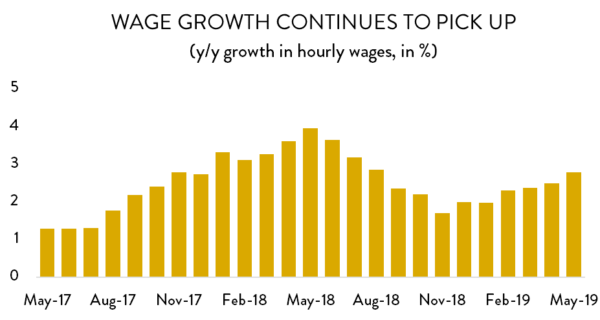 As was the case in April, the strongest wage growth across the country was in Quebec and Manitoba.

April’s job gains were heavily concentrated in two provinces: Ontario and BC. Ontario added 20,900 net new jobs last month – an increase of about 0.3 per cent. Canada’s largest province has enjoyed strong job gains so far in 2019, with year-over-year employment growth well above the average rate in the other nine provinces. 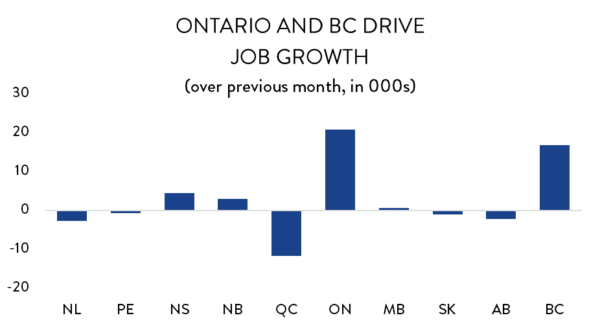 A similar story is taking place in BC. That province added 16,800 net new jobs in May. Employment has risen in 10 of the last 11 months. And at 3.2 per cent through five months, BC is experiencing the fastest year-to-date job growth of any province so far in 2019.

Nova Scotia and New Brunswick also posted solid job growth in May, while there was a modest increase in Manitoba. Elsewhere, however, employment was lower. The largest decrease on a percentage basis was in Newfoundland and Labrador (down 1.2 per cent), while the largest decline in terms of raw numbers was in Quebec (11,600 jobs lost).

At the industry level, employment growth was relatively widespread with 10 of the 16 industry sub-sectors posting gains. Leading the way was health care and social assistance which added 20,400 jobs, followed by professional, scientific and technical services (17,200 jobs). In both cases, those increases offset recent declines. Other gainers included transportation and warehousing, manufacturing and miscellaneous services. 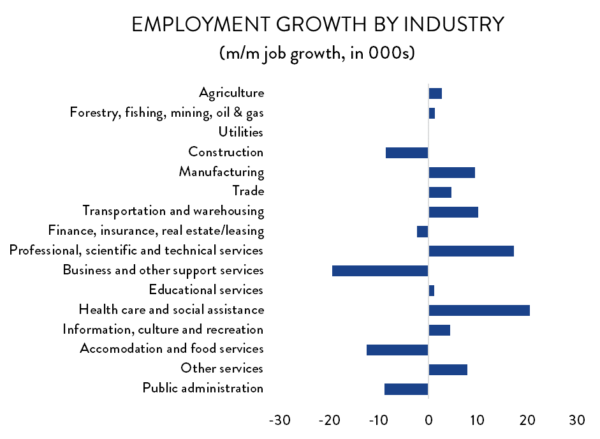 Those increases were partially offset by declines in business and support services (19,400 fewer jobs), accommodation and food services (12,400 jobs) and public administration (8,900 jobs). Of those, it’s the hotels and restaurants that have been suffering the most. Businesses there have shed 51,000 jobs since December.

May was another good month for manufacturing jobs across Canada. The sector added 9,400 net new positions – the fourth consecutive increase and eighth in the last nine months. This trend is the exact inverse of the one we saw in late 2017 through to August of last year. Since the trough in August, manufacturers have added 44,500 jobs and now employ 1.76 million Canadians – nearly as many as in November 2017. 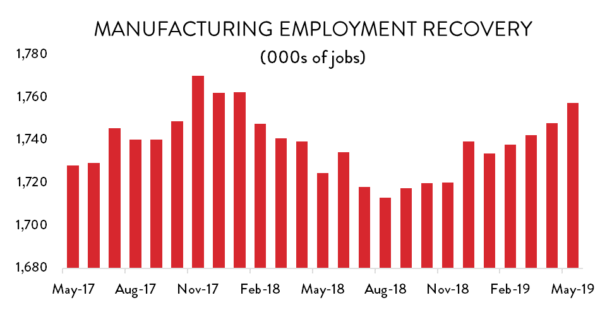 The increase in manufacturing jobs drove the sector’s unemployment rate slightly lower in May. In spite of higher employment, the jobless rate also jumped from 3.2 per cent in March to 4.0 per cent in April. In May it fell back to 3.8 per cent.

Manufacturing wage growth eased off in May. After three months of year-over-year growth in the range of 5.0 per cent, wage growth fell back to 2.9 per cent last month, bringing it more or less in line with the national average. 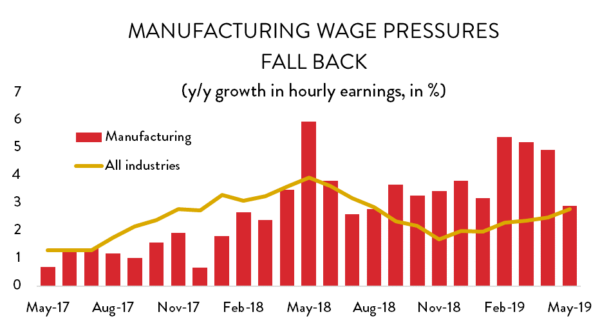 Even so, through five months, manufacturing wages in 2019 are averaging about 4.3 per cent above where they were over the same period last year. The largest increases are in PEI (11.5 per cent) and Saskatchewan (9.6 per cent), while wages are falling in Nova Scotia, Newfoundland and Labrador, and Manitoba.

BC was Canada’s manufacturing jobs growth leader in May. The province added 8,100 net new jobs, which translates into a remarkable 4.8 per cent increase. That jump marks a dramatic departure from recent trends in that province. Manufacturing employment in BC had been steadily declining since January 2018, but in a single month, the province regained almost all those lost jobs. 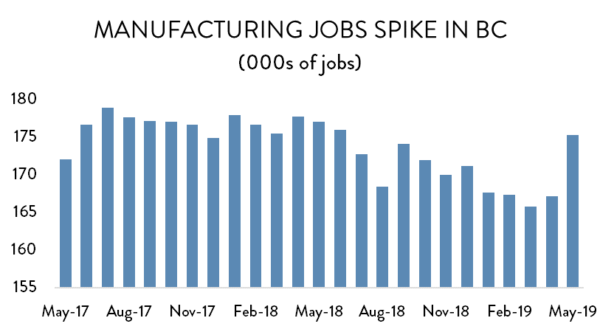 Manufacturing employment was also higher in Quebec, where the addition of 5,900 jobs was more than enough to make up for April’s job losses in the province. There were also strong gains in Manitoba (1,600 positions) and smaller increases in the other prairie provinces. 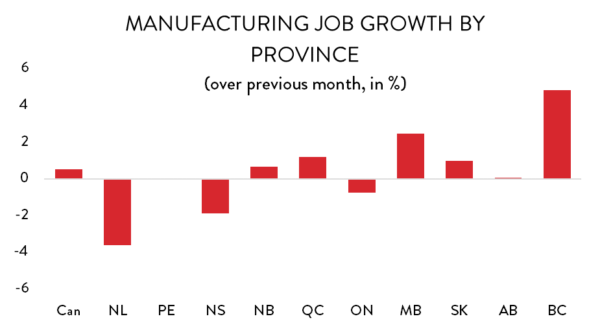 Meanwhile, there were 5,700 fewer manufacturing jobs in Ontario as that province gave back some of April’s gains. Manufacturing employment was also down in Newfoundland and Labrador, as well as in Nova Scotia.