After two months of torrid growth during which time the Canadian economy added more than 134,000 jobs, employment was effectively unchanged in June as gains in Alberta offset losses in Ontario, Manitoba and BC. However, recent growth and tight labour markets are beginning to place significant upward pressure on wages across the country.

All told there were 2,200 fewer jobs across Canada in June. For an economy that employs close to 19.1 million people, that decline effectively represents zero growth in total employment for the month. With steady increases in the working-age population and an unchanged labour force participation rate, the national unemployment rate edged up slightly from 5.4 per cent in May to 5.5 per cent in June. 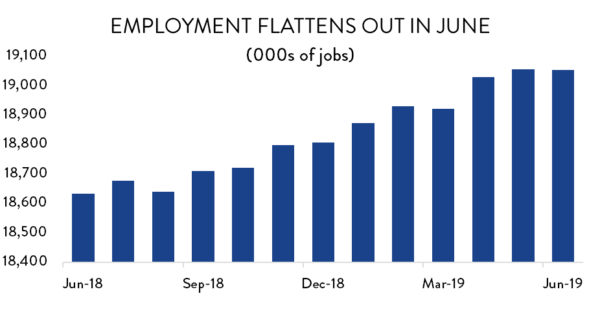 Momentum from earlier in the year has meant that overall job growth in 2019 has been strong compared to recent years. With half the year over, employment is tracking 2.1 per cent higher than it was in the first half of 2018. If that pace continues through the rest of the year, it would represent the fastest annual growth in employment since 2007.

The silver lining to the flat job numbers in June was that many part-time positions were converted to full-time jobs. There were 26,200 fewer part-time jobs across Canada in June, almost completely offset by the creation of 24,100 new full-time positions. That result bucks a trend that has seen much faster growth in part-time work so far in 2019. Through six months, part-time employment across the country has risen by about 4.0 per cent compared to 1.6 per cent growth in full-time positions. 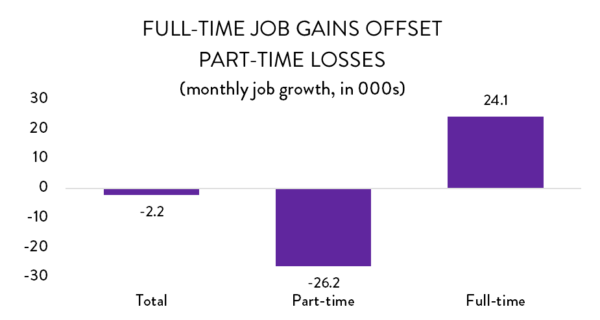 With strong job growth earlier in the year and an unemployment rate at near-record levels, wage pressures are continuing to build. After bottoming out late last year, wage growth had been slowly accelerating, rising to 2.9 per cent in May. In June, however, average hourly wage growth spiked to 3.8 per cent on a year-over-year basis – its highest level in more than a year. 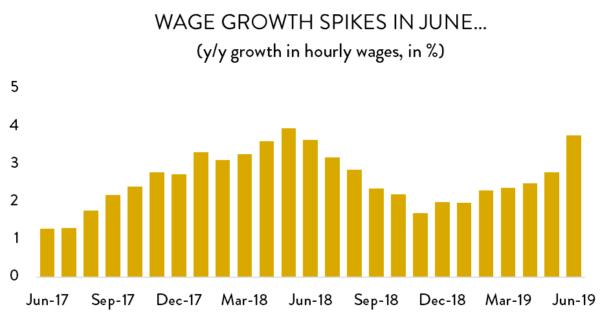 At the provincial level, the strongest wage growth in June was in Quebec and Ontario, where hourly earnings rose by 5.0 per cent and 4.2 per cent, respectively. Meanwhile, wages were flat in Saskatchewan (up 0.1 per cent) and below the rate of inflation in BC (1.7 per cent). 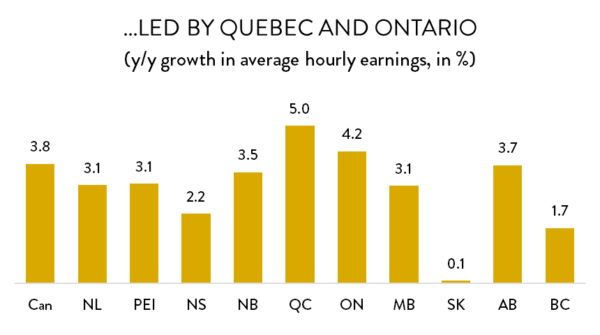 Employment growth was mixed across the country with gains in five provinces and losses in the other five. By far the largest increase was in Alberta, where the province added 10,400 net new jobs compared to May – a healthy jump of about 0.4 per cent. Saskatchewan saw employment rise at about the same rate, creating 2,500 new positions in the process. There were also strong gains in PEI and New Brunswick, and a negligible increase in Quebec. 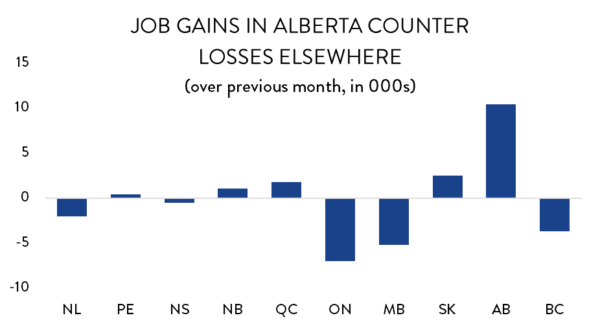 On the negative side, there were 7,000 fewer jobs in Ontario in June – a decrease of about 0.1 per cent. Manitoba lost almost as many jobs (5,400), but that number represents a much more significant decline for a smaller province; employment in Manitoba was down by almost 0.8 per cent. There were also fewer jobs in BC, Newfoundland and Labrador, and Nova Scotia last month.

At the industry level, the story in June was job losses in goods-producing industries largely offset by growth in the services sector. There were 32,800 fewer jobs in the goods sector in June, with the largest losses in manufacturing (15,000 jobs), resource industries (7,800 jobs) and construction (7,400 jobs). 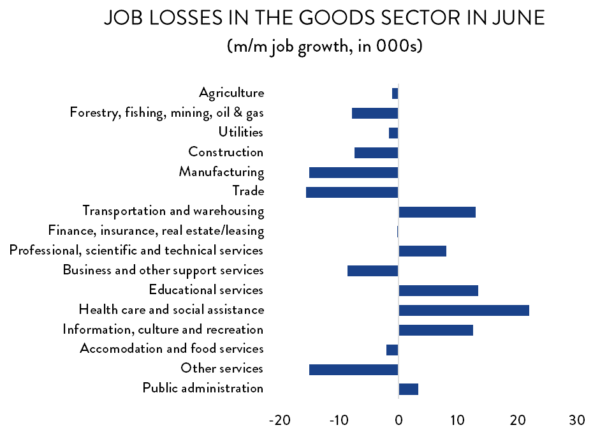 After adding more than 37,000 jobs from November to May, the manufacturing sector gave back a large share of those gains in June. The loss of 15,000 manufacturing jobs brings total employment in the sector to 1.74 million people – about the same as it was in March. 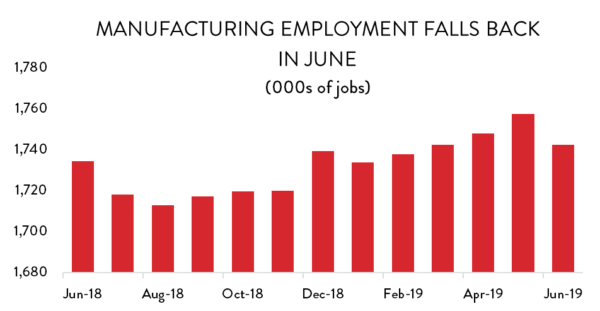 In spite of rather significant job losses, the number of people self-identifying as being in the manufacturing labour force fell considerably in June. As a result, the unemployment rate in manufacturing dropped as well – from 3.8 per cent in May to 3.6 per cent in June.

Manufacturing wages were back up in June after an unusual downward blip in May. However, looking more broadly, wage pressures appear to be easing slightly compared to earlier in the year. In February, year-over-year wage growth in manufacturing reached as high as 5.4 per cent – well over double the all-industry average. Since then wage growth began to taper off, before dipping to about 2.9 per cent in May. In June, wage growth rebounded to about 4.6 per cent. However, the recent trend has been a gradual decrease in manufacturing wages even as wage pressures mount in other industries. 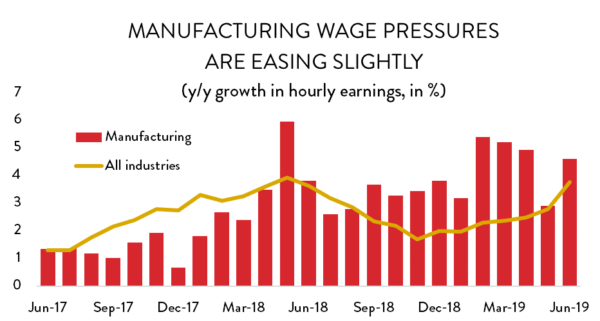 Through the first half of 2019, manufacturing wages are averaging about 4.4 per cent higher than they were from January-June 2018. The strongest wage growth has been in some of Canada’s smaller provinces, with PEI and Saskatchewan leading the way. Ontario is also seeing notable wage increases, however, as manufacturing wages in that province are tracking 6.2 per cent higher than they were in the first half of last year. 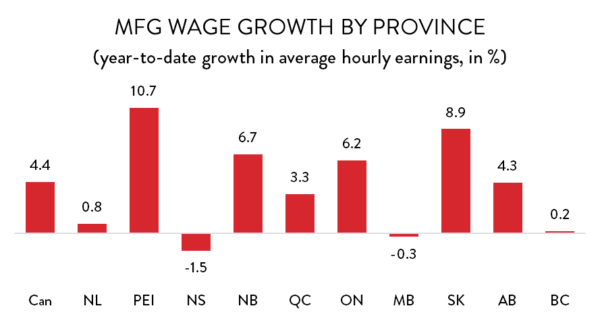 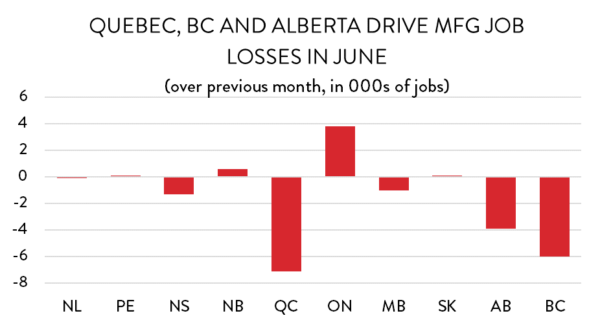 On the positive, side, Ontario’s manufacturing sector added 3,800 net new jobs in June, erasing most of its losses in May. Manufacturing employment was also higher in New Brunswick, Saskatchewan and PEI.

Looking at the first six months of 2019, manufacturing job growth in Canada has been heavily concentrated on the prairies so far this year. While sectoral employment nation-wide is just 0.1 per cent higher compared to the first half of 2018, growth on the prairies ranges from 5.7 per cent in Alberta to 6.4 per cent in Saskatchewan. 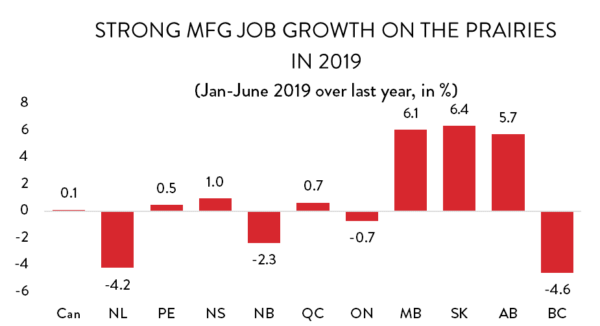