Following two consecutive months of strong growth, employment was little changed in April, rising by 15,300 (+0.1%). Notably, total hours worked fell 1.9% in April, driven in part by a spike in absences due to COVID-19. 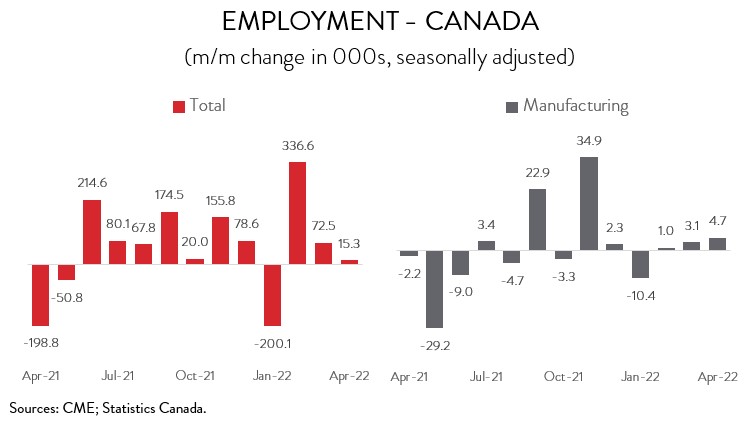 While the April increase in employment may seem disappointing, a slowdown was inevitable given that the economy is at full employment. Based on the latest job vacancy data, the number of available positions exceeds the number of people looking for work. This suggests that a limited supply of new workers is acting as a constraint on employment growth.

Manufacturers added 4,700 workers to payrolls in April, building on cumulative job gains of 4,100 in the previous two months. As of April, manufacturing employment was 1.1% above its pre-pandemic level, with 1.76 million people working in the sector last month.

The headline unemployment rate ticked down from 5.3% in March to 5.2% in April, while the jobless rate in manufacturing fell from 2.9% to 2.7%, both record lows. 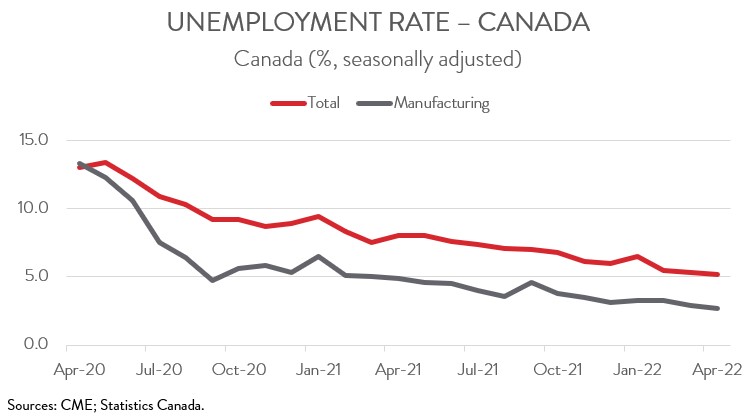 With the unemployment rate at an all-time low and job vacancies at an all-time high, labour market conditions in Canada’s manufacturing sector are extraordinarily tight. As such, manufacturers continue to face growing pressure to raise wages to attract and retain workers. Indeed, wages in manufacturing rose 0.5% in April, the third increase in four months. On a year-over-year basis, wage growth in the sector slowed from 6.6% in March to a still-elevated 6.2% in April. For the third month in a row, the average wage rate exceeded $30 per hour. 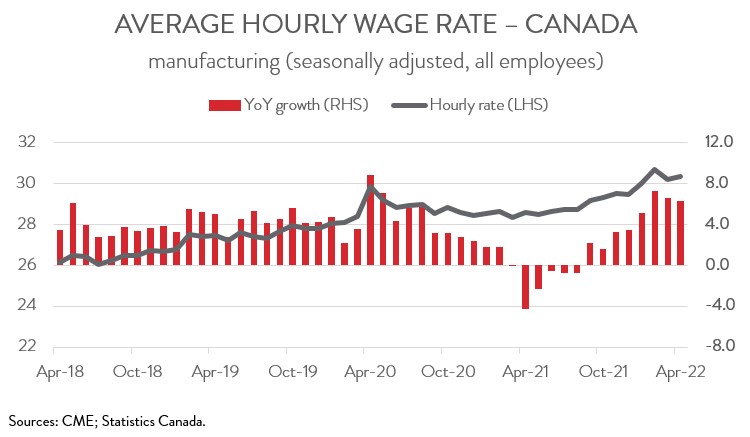 Regionally, employment was up in five of ten provinces in April. The largest proportional increases were recorded in New Brunswick (+6,700), Nova Scotia (+5,900), and Newfoundland and Labrador (+2,500), while the largest absolute gains were observed in Alberta (+15,900) and Ontario (+14,300). This was Alberta’s first notable increase since December 2021, and it was driven mainly by the wholesale and retail trade sector. On the negative side, employment in Quebec fell by 26,500 in April, the first decline in three months, with the losses concentrated in construction and educational services.

In the manufacturing sector, employment was also up in five provinces, with the lion’s share of the gains recorded in Ontario (+9,400), its third straight monthly advance. In proportional terms, solid increases were also observed in Newfoundland and Labrador (+600) and Prince Edward Island (+400). On the downside, these increases were partially offset by noteworthy declines in Nova Scotia (-2,700) and BC (-2,200). This was the second consecutive monthly decrease for BC’s manufacturing sector. 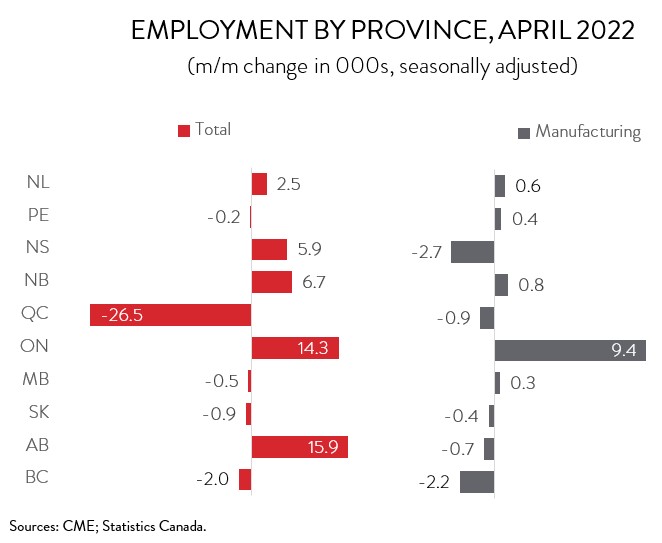