Employment Falls for the First Time Since January, But Manufacturing Adds 26,300 Workers

Employment fell by 43,200 (-0.2%) in June, more than wiping out the 39,800 jobs created in May. However, the report’s details were more encouraging than the headline numbers. All of the decline was among the self-employed, most of which were part-time positions. At the same time, total hours worked rose 1.3%. 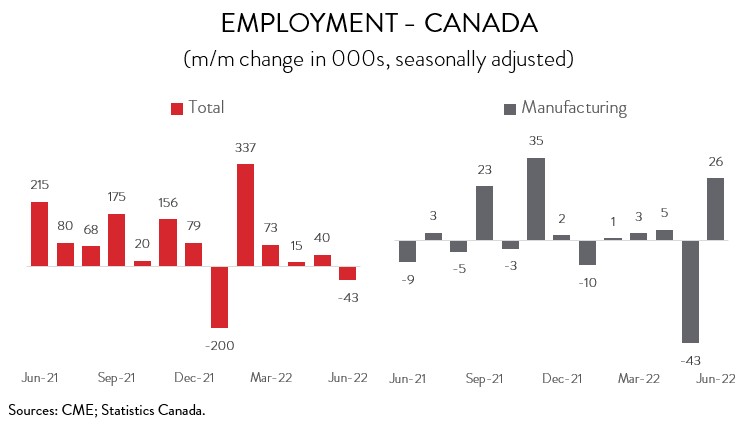 By industry, the job losses were concentrated in the services sector, with the largest decline recorded in wholesale and retail trade (-60,700). Employment was also down in health care and social assistance (-20,200), educational services (-14,200), and information, culture and recreation (-13,900). On the other hand, employment on the goods side of the economy was up, with manufacturing (+26,300) and construction (+23,000) posting strong gains. Unfortunately, this was partially offset by a notable decline in natural resources (-20,100).

Wage growth in manufacturing has been elevated since the beginning of this year, but now the headline number is also picking up steam. In June, year-year-over wage growth in the overall economy surged above 5%. This, along with the record low unemployment rate and increase in hours worked, should provide the Bank of Canada enough evidence to hike rates by 75 basis points at its next policy meeting on July 13th.

MANUFACTURING EMPLOYMENT PARTIALLY RECOVERS FROM STEEP FALL IN MAY

As mentioned above, the manufacturing sector bucked the trend, posting a 26,300 (+1.5%) increase in employment in June, tops among all industries. This partially offset the 43,200 jobs lost in May and pushed the sector’s employment back up to its pre-pandemic level. As of June 2022, 1.75 million people were employed in Canada’s manufacturing sector.

Despite the decrease in employment, the headline unemployment rate fell to a new record low of 4.9% in June, down from 5.1% in May, as fewer people searched for work. At the same time, the jobless rate in manufacturing remained unchanged at 3.0%, just 0.3 percentage points shy of its all-time low. 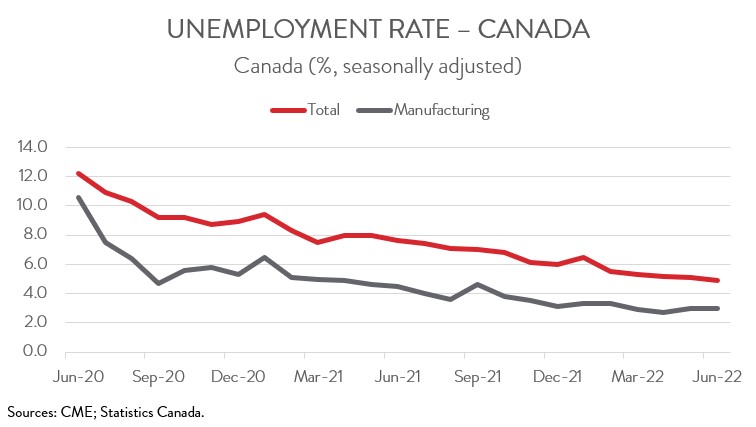 Canada’s job market is exceptionally tight. In the Bank of Canada’s latest Business Outlook Survey, the number of businesses reporting labour-related constraints remained at a record high. When it comes to labour shortages, manufacturing is one of the hardest hit sectors, and this is leading to an upswing in wages. In fact, average hourly earnings in manufacturing rose by 1.1% in June. As a result, year-over-year wage growth accelerated from 4.5% in May to 5.0% in June. This pushed up the sector’s average wage rate to $30 per hour. 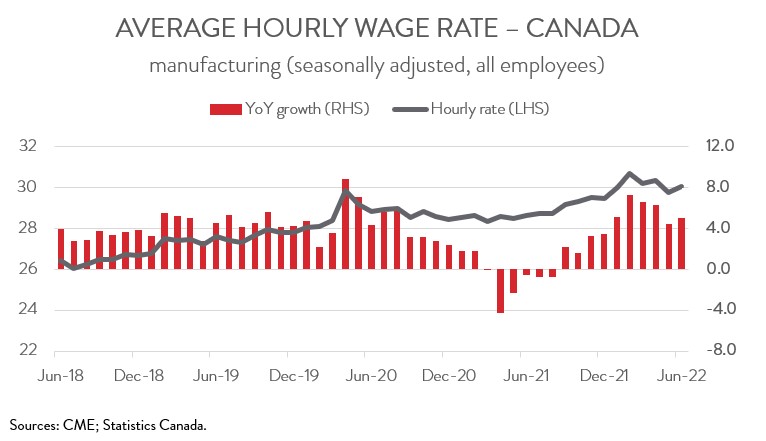 JOB LOSSES CONCENTRATED IN NEWFOUNDLAND AND LABRADOR, QUEBEC AND ONTARIO

Regionally, employment was down in five of ten provinces in June. The largest absolute declines occurred in Quebec (-27,000) and Ontario (-24,700), while the largest proportional decrease was observed in Newfoundland and Labrador (-4,300). This was Quebec’s second decline in three months, with June’s losses concentrated in natural resources and information, culture and recreation. On the positive side, PEI (+1,600) posted its second consecutive monthly increase in employment in June. 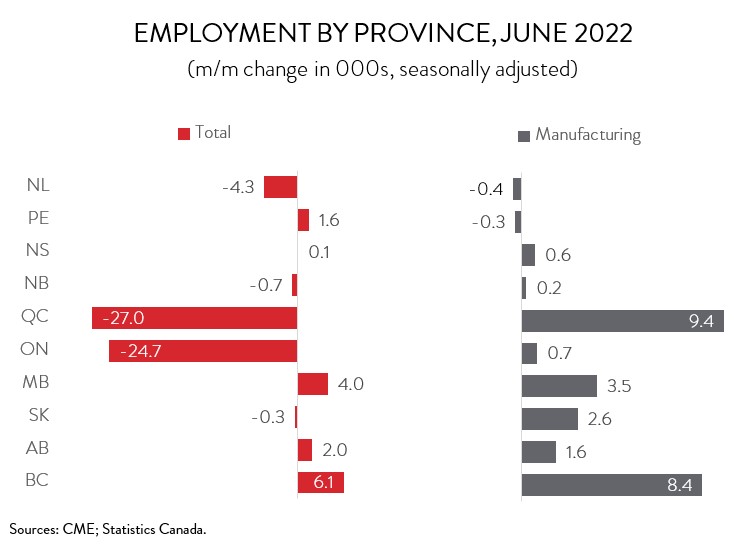