Employment fell by 30,600 (-0.2%) in July, the second straight month of modest losses. Total hours worked fell for the third time in four months, down 0.5% in July, another indication that the Canadian economy is losing momentum. 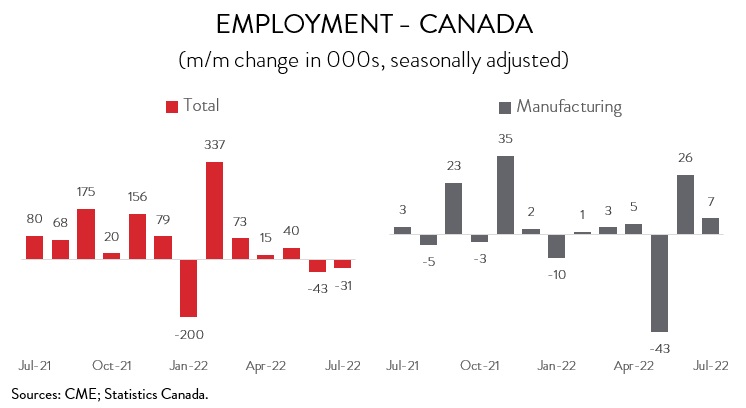 By industry, the job losses were concentrated on the services side of the economy, particularly in the public sector. The declines were led by wholesale and retail trade (-26,900), health care and social assistance (-22,000), and educational services (-18,000). Finance, insurance, real estate, rental and leasing (+10,800) was the only services-producing industry to see significant employment gains in July. For a second consecutive month, employment declines in services were moderated by an increase in the goods-producing sector, with gains driven by construction (+7,700) and manufacturing (+7,100).

Although today’s job market report is another sign that Canada’s economy is cooling, the record low unemployment rate and strong wage growth, along with soaring inflation, likely provide the Bank of Canada enough justification to deliver another sizeable rate hike at its next meeting in September.

The decline in employment was matched by a drop in the participation rate. As a result, the headline unemployment rate held steady at 4.9% in July, matching the record low reached in June. At the same time, the jobless rate in manufacturing remained unchanged at 3.0% for the third straight month, just 0.3 percentage points shy of its all-time low. 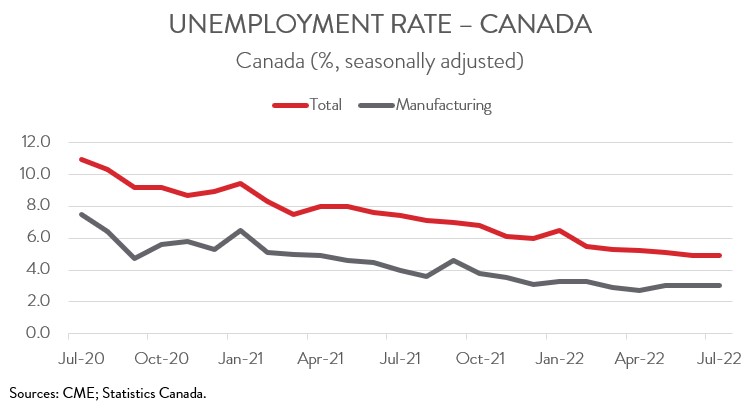 The record low headline unemployment rate and the near-record low manufacturing jobless rate both reinforce the view that Canada’s job market remains exceptionally tight, and this is leading to an upswing in wages.

In the overall economy, even though average wages edged down 0.3% in July, they stayed firm at 5.2% year-over-year. In manufacturing, average hourly earnings fell 0.6% month-over-month, enough to push down year-over-year wage growth from 5.0% in June to 4.0% in July. Nevertheless, this is still well above the sector’s historical average of 2.5%. 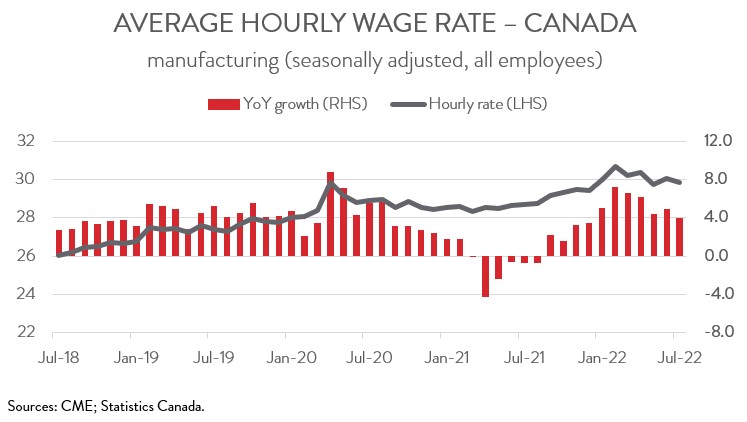 FEWER PEOPLE WORKING IN ONTARIO AND PEI IN JULY

Regionally, employment was down in five of ten provinces in July. The largest absolute decline occurred in Ontario (-27,400), while the largest proportional decrease was observed in Prince Edward Island (-2,300). This was Ontario’s second decrease in as many months, with July’s losses concentrated in wholesale and retail trade and educational services. On the positive side, Manitoba (+2,500) posted its second consecutive monthly increase in employment in July.

In the manufacturing sector, employment was up in six provinces, with the most notable increases recorded in Ontario (+13,400) and Nova Scotia (+3,000). At the other end of the spectrum, manufacturers in BC shed 8,900 workers in July, the fourth decline in five months. Manufacturing employment in Canada’s westernmost province is now down to its lowest level since July 2021. 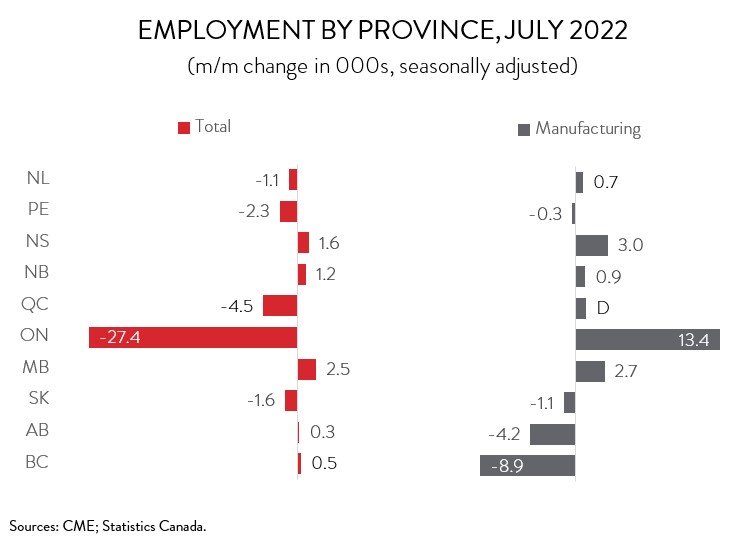