Employment rose by 108,300 (+0.6%) in October, recouping all the losses observed from May to September. The strong job growth lifted employment to an all-time high of 19.656 million. 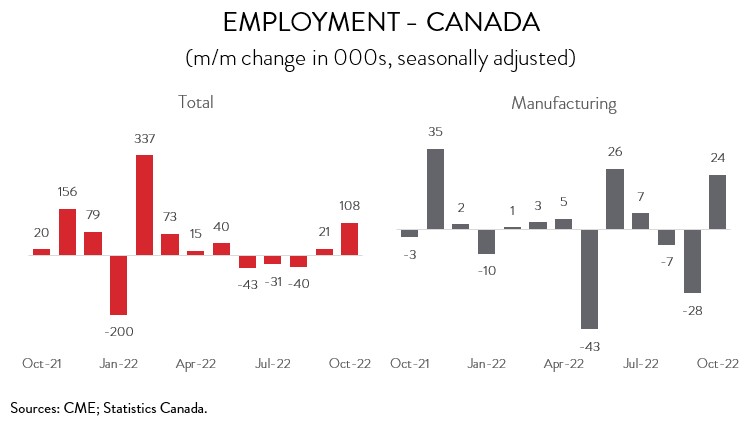 The October jobs report blew away expectations. The rebound in employment, the surge in hours worked, and the acceleration in wage growth all raise some questions about the extent of the economic slowdown. The strong labour market data also support analysts’ expectations of a 50-basis point interest rate hike from the Bank of Canada in December.

As mentioned above, manufacturing employment rose by 23,800 (+1.4%) in October, the first increase in three months and largely offsetting the decrease of 27,500 (-1.6%) in September. Still, even with this gain, the manufacturing sector has shed 21,700 workers since the beginning of the year. As of October, employment in the sector stood at 1.744 million.

The headline unemployment rate held steady at 5.2% in October, 0.3 percentage points above the record low observed in June and July. At the same time, the jobless rate in manufacturing decreased for the first time in six months, falling 0.2 percentage points to 3.7%. 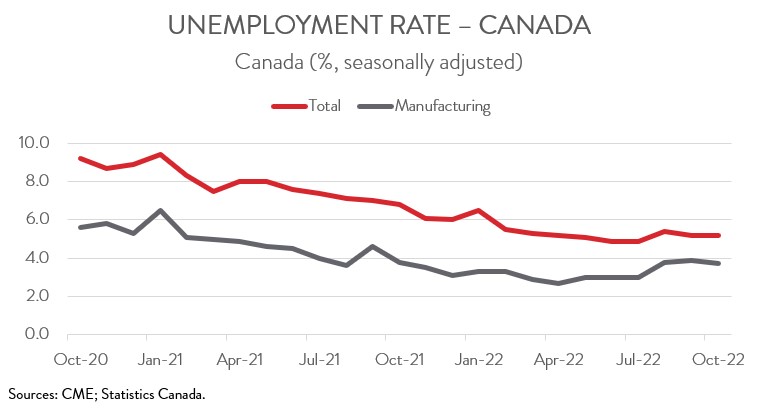 The combination of strong job gains and an exceptionally large number of job vacancies boosted average hourly earnings in the overall economy by 0.9% in October, the third consecutive monthly advance. This pushed up year-over-year wage growth to 5.6%. Excluding the unusually strong wage growth observed during the first year of the pandemic in 2020, this was the second strongest gain on record.

A similar story continues to unfold in manufacturing. Average hourly earnings rose 1.3% in October, the biggest one-month gain since January 2022. Accordingly, year-over-year wage growth accelerated to 5.6%, more than double the sector’s historical average of 2.5%. The strong wage growth is consistent with the results of CME’s recently released 2022 Labour and Skills Survey, which shows that manufacturers continue to face severe labour shortages. 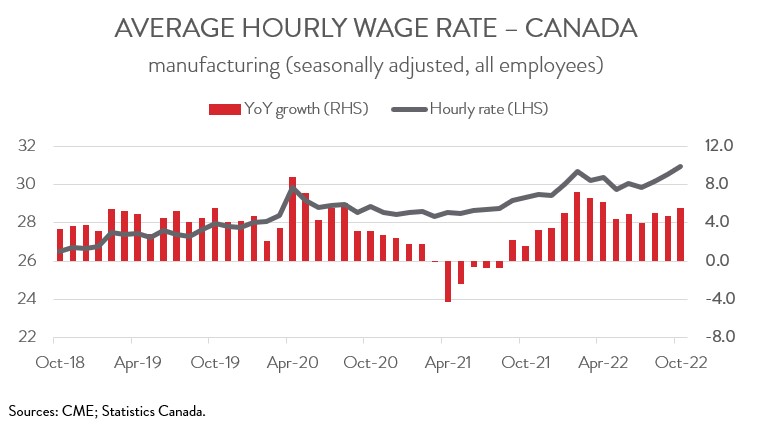 EMPLOYMENT INCREASE WIDESPREAD ACROSS THE COUNTRY

Regionally, the employment increase spanned all ten provinces. The largest absolute gains were recorded in Ontario (+42,700) and Quebec (+27,800), while the largest proportional increase was observed in PEI (+4,300). The gains in Ontario were largely in part-time work and were concentrated in accommodation and food services and professional, scientific and technical services. In tandem with the strong job growth, Quebec’s unemployment rate also fell 0.3 percentage points to 4.1%, the lowest in the country.

In the manufacturing sector, employment was up in seven provinces in October. The bulk of the gains were posted in BC (+11,500) and Nova Scotia (+3,700). This was BC’s first increase in manufacturing employment since June 2022. Newfoundland and Labrador (-1,500) and New Brunswick (-1,400) were the only provinces to post notable declines. 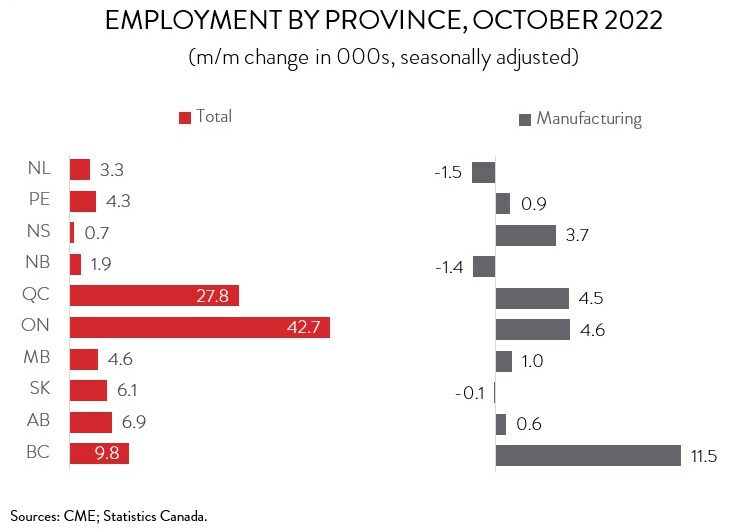