The Canadian labour market seems to have hit the summer doldrums as nearly every major labour market indicator softened in July. Meanwhile, strong employment growth from earlier in the year, combined with chronic labour shortages in several industries, are putting significant upward pressure on average wages across the country.

While employment has now fallen in two consecutive months, it is important to stress that the declines have been relatively small. In June, Canada lost about 2,200 jobs compared to May – a number that amounts to little more than a rounding error. Job losses were slightly more severe in July, as employment fell by another 24,200 positions. Even so, for an economy that employs more than 19 million people, that number represents a decline of only about 0.1 per cent. 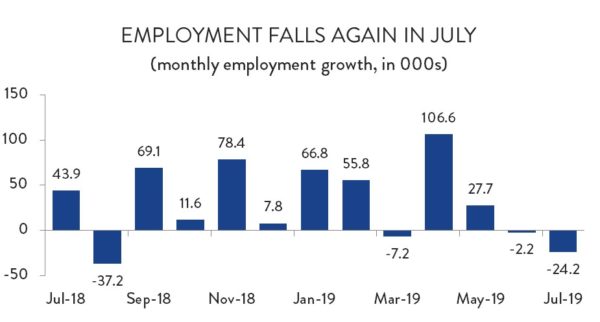 Job losses drove the unemployment rate slightly higher in July as well. Although there was a small decrease in labour force participation, the jobless rate edged up from 5.5 per cent in June to 5.7 per cent in July.

Even with two consecutive months of modest job losses, Canadian labour markets have been exceptionally strong so far in 2019. Thanks in large part to a surge in employment in April and May, job growth through seven months is tracking about 2.1 per cent higher than it was over the same period last year. As noted last month, if that pace continues for the rest of the year, it would represent the fastest annual growth in employment since 2007. 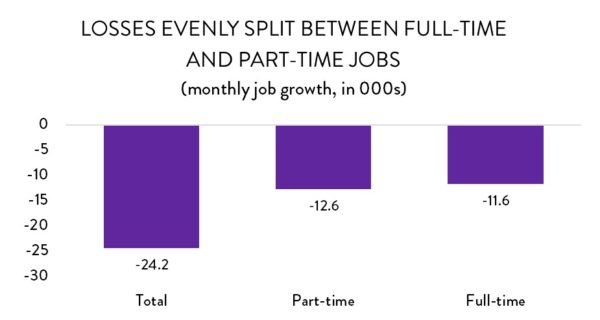 Employment may have dipped over the last couple of months, but wage pressures are continuing to mount. In May, average hourly wages were about 2.9 per cent higher than they were 12 months earlier. That growth rate jumped to 3.8 per cent in June and accelerated further in July. Average wages in July were 4.5 higher than they were at the same time last year. That represents the fastest wage growth Canada has seen in more than a decade. 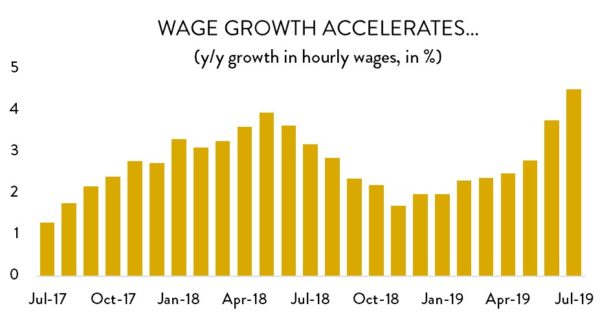 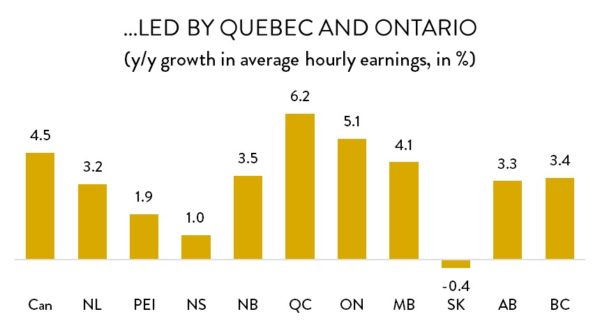 Seven of the 10 provinces posted weaker employment numbers in July. However, job losses were concentrated in Alberta and Ontario. After adding 10,400 positions in June, Alberta lost 14,300 net jobs in July – a decline of about 0.6 per cent. Meanwhile, Ontario posted a second consecutive month of lower employment, shedding 10,700 net jobs (a 0.1 per cent decline). There were also relatively severe job losses in Nova Scotia and New Brunswick; employment in each of those provinces fell by about 1.3 per cent compared to June. 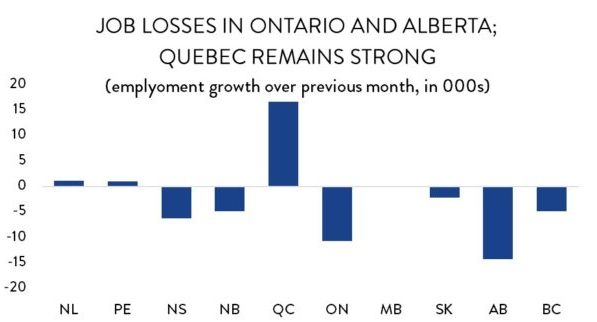 The bright spots in Canada were in Quebec and the other two Atlantic provinces. Quebec, unsurprisingly, added the largest number of jobs (16,600), while PEI posted the largest percentage increase (1.3 per cent).

At the industry level, the steepest job losses were in the goods sector and in services directly tied to goods production. There were 20,600 fewer Canadians working in wholesale and retail trade in July, while employment in transportation and warehousing fell by about 14,800 positions. Employment in resource extraction and manufacturing was also down, while the only bright spot in the goods sector was in construction, where employment jumped by 25,000 workers – more than enough to offset two consecutive months of declines. 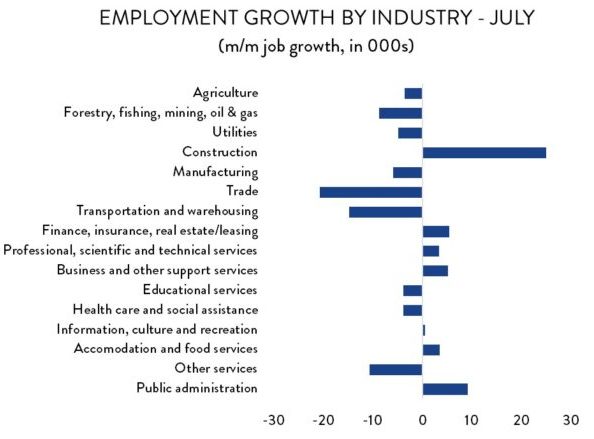 On the services side, aside from those industries mentioned above, the story was slightly more positive. There were modest job gains in white-collar industries like finance, insurance and real estate (5,400 jobs), as well as professional, scientific and technical services (3,400). Public service employment was also up by about 9,200 jobs, with most of those new jobs created in Ontario. 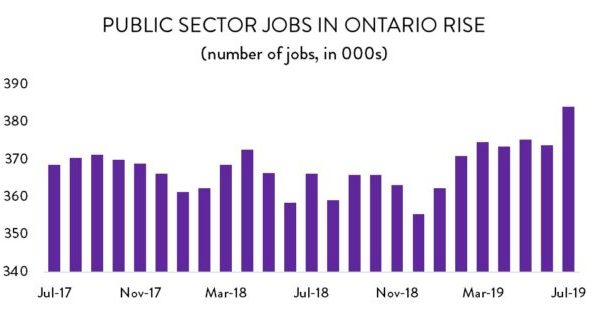 Employment in manufacturing fell for the second consecutive month in July, reversing a trend of strong growth from November to May. After cutting about 15,000 positions in June, manufacturers shed another 5,900 jobs in July, bringing total employment in the sector back to about where it was at the beginning of the year. 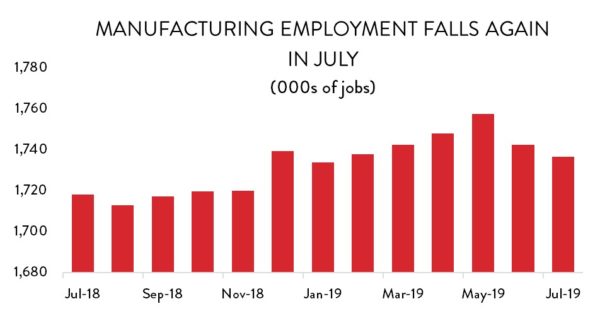 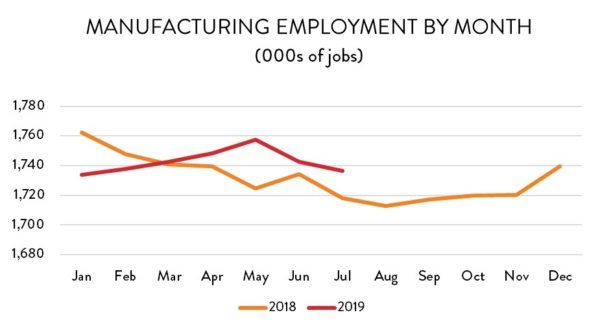 Tight labour markets are keeping wage pressures in manufacturing high. Average wages in June were 4.6 per cent higher than they were a year ago. That figure rose to 5.3 per cent in July – its highest level since February. While labour-shortage-induced wage pressures create major cost challenges for manufacturing businesses, the silver lining is that the gap between manufacturing wage growth and the all-industry average is closing rapidly. In the spring, manufacturing wages were growing twice as fast as the national average. That gap has since almost disappeared. 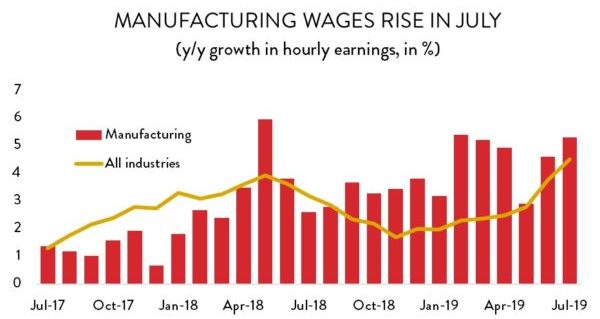 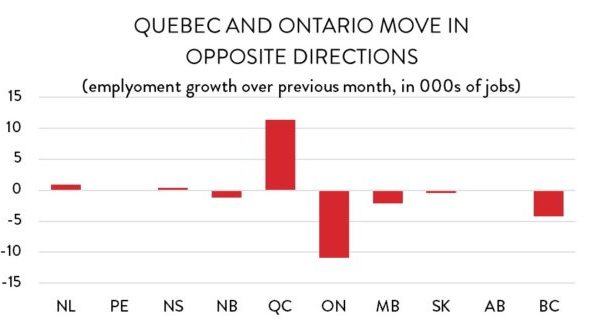 On the positive side, while there have been bumps along the way, the total number of manufacturing jobs in Quebec has been trending upward since last October. Since that time, the province has added 24,500 net new manufacturing jobs, including a jump of 11,400 new positions in July. Manufacturing employment was also higher in Newfoundland and Labrador and in Nova Scotia. In both cases, those increases represent a partial recovery of job losses from earlier in the year.