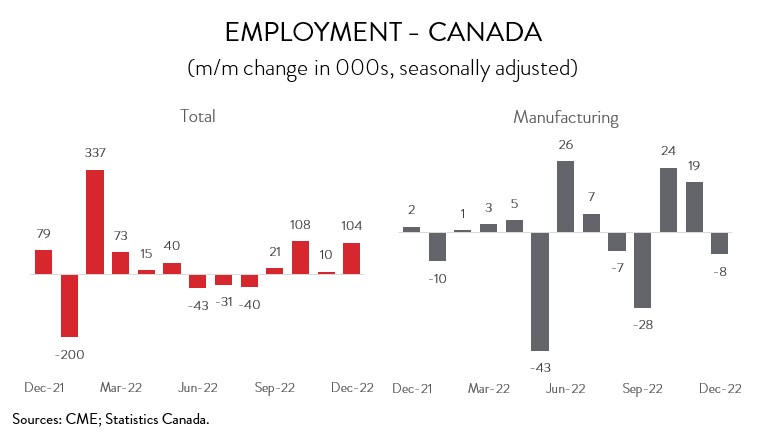 Employment was up in 10 of 16 industries. The biggest increases were observed in construction (+35,000), transportation and warehousing (+29,300), information, culture and recreation (+25,000), and professional, scientific and technical services (+23,100). Partly offsetting these gains was a decrease of 17,400 jobs in health care and social assistance, its largest decline since July 2022.

Canada’s labour market continues to show resilience in the face of growing headwinds. Although the Bank of Canada has indicated that its rate-hike campaign is nearing an end, the strength of this report supports the view that the Bank has another hike left in store. Its next meeting is scheduled for January 25th.

Manufacturing employment fell by 7,800 (-0.4%) in December, the first decline in three months. The job cuts in December coincide with recent softness in other key indicators like GDP, exports, and manufacturing sales.

Turning to the annual data, manufacturers added 13,000 positions in 2022, down substantially from the 62,200 new hires in 2021. Still, thanks to these back-to-back gains, the industry’s employment climbed to an average of 1.748 million last year, the highest level since 2012. 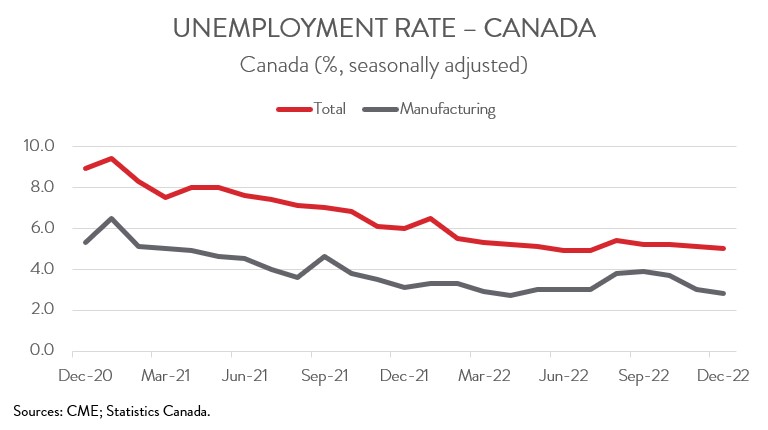 While the unemployment rate sits near a record low, job vacancies have started to fall, with the declines concentrated in industries that are more sensitive to interest rates. This could help explain the moderation in headline wage growth. Indeed, the average hourly wage rate in the overall economy decreased by 0.2% in December. On a year-over-year basis, wage growth decelerated from 5.6% in November to a still-firm 5.1% in December.

In contrast, pay gains remain robust in manufacturing, even though the sector’s job vacancies have also been trending lower. This indicates that manufacturers continue to face significant challenges finding workers. In fact, average hourly earnings in the manufacturing sector rose 1.0% in December, the fifth straight monthly advance. As a result, year-over-year wage growth surged from 6.9% in November to 8.2% in December, more than three times the sector’s historical average of 2.5% and the second-highest rate on record. 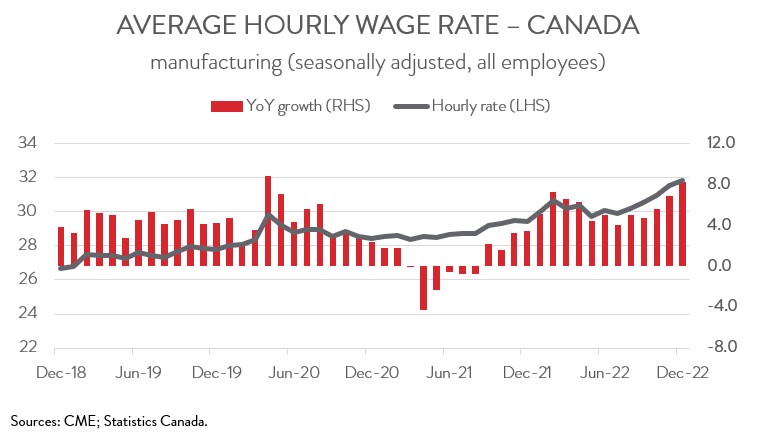 Regionally, the employment increase spanned 9 of 10 provinces. The largest absolute gains were recorded in Ontario (+42,100), Alberta (+24,500), and BC (+16,600), while the largest proportional increase was observed in Newfoundland and Labrador (+6,700). This was Alberta’s first notable job growth since May 2022.

In the manufacturing sector, employment was down in five provinces in December. The lion’s share of the decrease was registered in Ontario (-6,900), its first drop in three months. In proportional terms, noteworthy declines were also observed in Nova Scotia (-2,000) and Saskatchewan (-1,100), while significant gains were posted in PEI (+600) and Newfoundland and Labrador (+600). 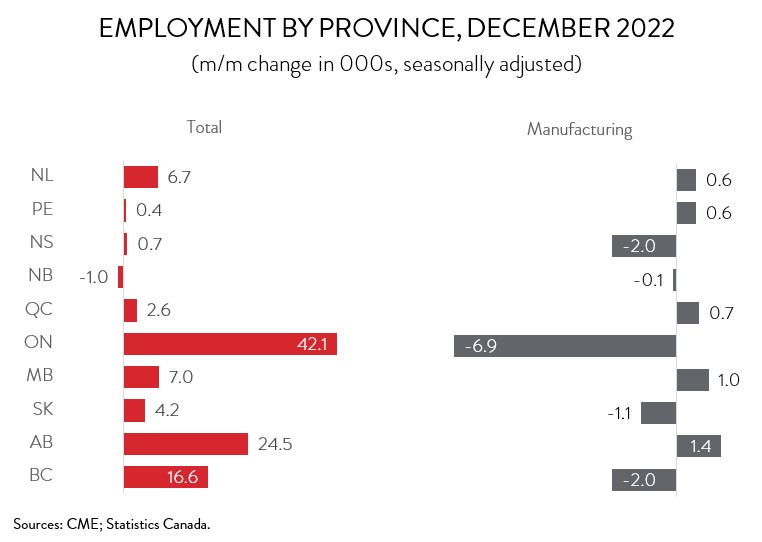