Manufacturing sales rose for the third consecutive month in July, up 7.0 per cent to $53.1 billion, leaving them 5.4 per cent below February’s pre-pandemic levels. After removing the effect of prices, manufacturing volumes rose 6.1 per cent. 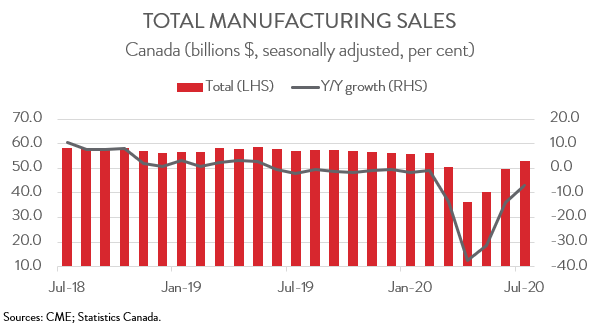 Thanks to three consecutive monthly gains, manufacturing sales have now recouped 85 per cent of their COVID-related losses. That said, the gain in July was markedly slower than June, and it came in below a preliminary estimate of 8.7 per cent released in mid-August. This suggests that the economic recovery is slowing after a strong initial rebound amid reopening economies.

The plastics and rubber products industry saw sales rise 15.1 per cent, their third straight monthly gain, owing partly to increased demand for plastic and rubber auto parts. Petroleum and coal product sales climbed 13.0 per cent in July, thanks to both higher prices and volumes. But despite their double-digit gain, sales were still down 39.4 per cent on a year-over-year basis.

On the negative side, sales of food products fell 1.7 per cent, the industry’s first decrease in three months. According to Statistics Canada, the decline was attributable to lower seafood sales. Sales were also down in aerospace (-2.3 per cent) and primary metals (-1.4 per cent). Aerospace sales were nearly 20 per cent lower than their year-ago levels. 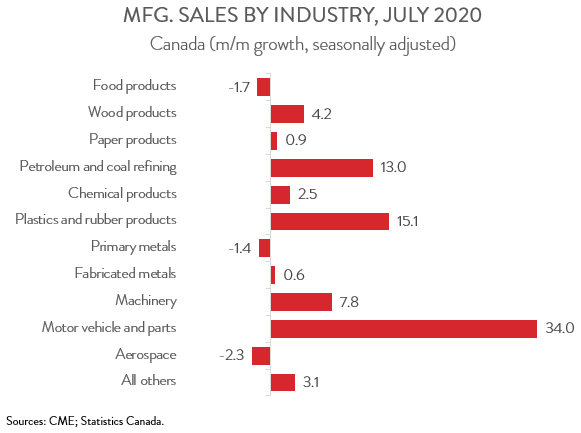 Manufacturing sales increased in 7 of 10 provinces in July, led by double-digit gains in Ontario and Manitoba. Sales in Ontario rose for the third consecutive month, up 12.8 per cent, with higher sales of motor vehicle and parts largely responsible for the gain. Factory sales in Manitoba climbed 10.6 per cent, reflecting higher transportation equipment sales.

BC also recorded a solid advance in July, with sales up 4.3 per cent. About half the increase was attributable to higher wood product sales, in line with a significant rise in housing starts in both Canada and the United States since April. 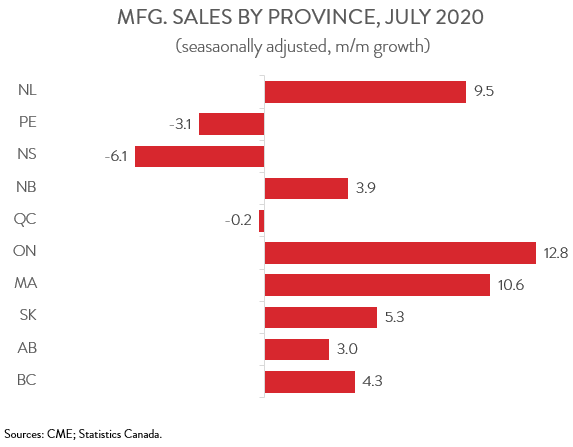 Total inventories fell 0.8 per cent to $86.4 billion in July, their lowest level since February 2019. This, combined with the increase in sales, pushed down the inventory-to-sales ratio from 1.75 in June to 1.63 in July. This closely watched ratio continues to edge closer to its February 2020 level of 1.56. 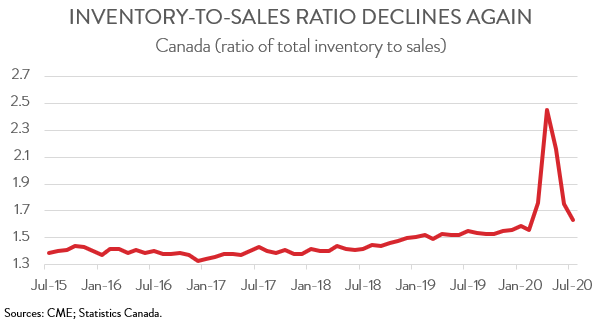 Forward-looking indicators were mixed, continuing a recent trend. Unfilled orders fell for the fourth consecutive month in July, falling 1.2 per cent to $92.5 billion, their lowest level since September 2018. The aerospace industry, which accounts for more than half of total unfilled orders, contributed the most to the decrease in July.

On a positive note, new orders increased for the third month in a row, climbing 9.0 per cent to $52.0 billion in July. The gain was partly attributable to higher new orders of motor vehicles and parts. 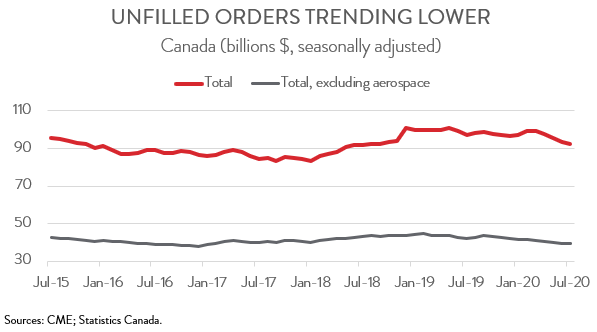 Finally, the manufacturing sector’s s capacity utilization rate rose for the third straight month, increasing from 74.3 per cent in June to 74.9 per cent in July. This is still below both the February 2020 level of 76.8 per cent and the prior three-year average of 78.8 per cent. 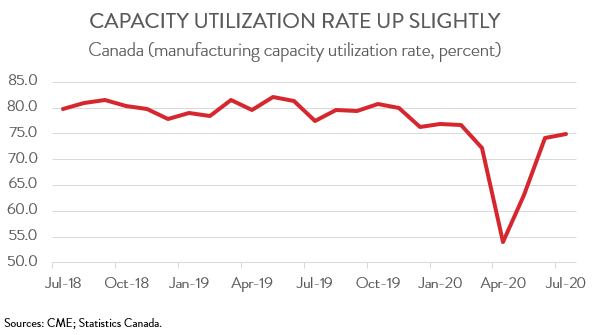