Manufacturing sales fell 2.0 per cent to $54.2 billion in August, following three months of strong increases. After removing the effect of prices, manufacturing volumes declined 2.2 per cent. 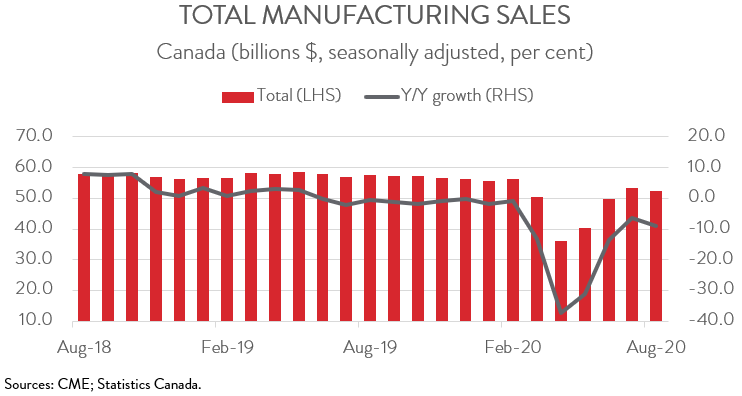 After three strong reports, the manufacturing sales numbers for August were disappointing, and have pushed the recovery further back. Forward-looking indicators were also subdued and come against a backdrop of rising COVID-19 cases and renewed restrictions in virus hotspots. The path back to pre-pandemic activity levels will be long and difficult.

Sales were down in 4 of 11 major industries, headlined by significant declines in aerospace and in motor vehicle and parts. In fact, excluding transportation equipment, sales rose 1.1 per cent.

Sales of motor vehicle and parts fell by 13.5 per cent in August, following three straight months of large gains. That said, sales levels in August were still decent, but were down compared to a stronger-than-usual July, as several car assembly plants shortened or skipped their annual retooling shutdowns over the summer.

The aerospace industry continues to struggle. Sales dropped by 25.0 per cent in August, leaving them about 40 per cent below both their pre-pandemic and year-over-year levels. Declines were also recorded in plastics and rubber products (-9.6 per cent) and in paper products (-2.1 per cent).

On the positive side, sales of wood products were up for the fourth month in a row, climbing 12.3 per cent, thanks to both higher prices and volumes. These recent gains can be largely explained by strong housing market activity in both Canada and the United States. 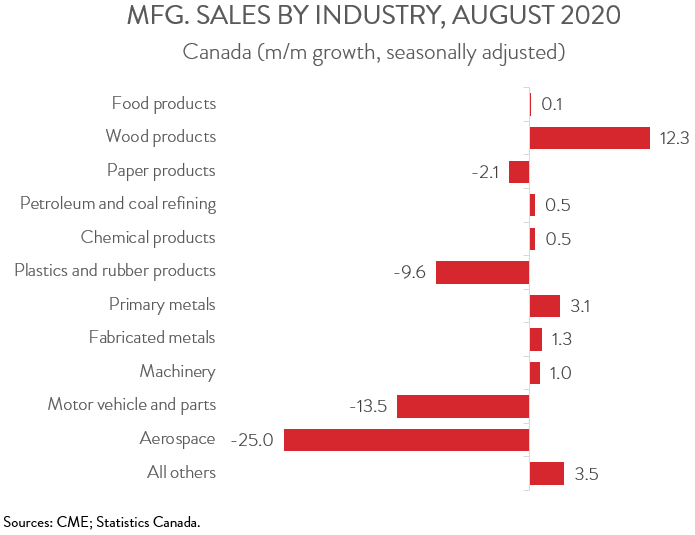 Manufacturing sales were down in four provinces in August. Sales in Ontario fell by 4.8 per cent, the first decline in four months. Mirroring national trends, much of the weakness was concentrated in the motor vehicle and parts and plastics and rubber products industries. Declines were also recorded in Newfoundland and Labrador (-7.4 per cent), New Brunswick (-7.2 per cent), and Alberta (-1.3 per cent).

These decreases were partly offset by strong gains in BC and Manitoba. Manufacturing sales in BC rose 5.1 per cent in August, thanks largely to higher sales of wood products. No other province has seen a quicker rebound in manufacturing sales—they were 4.6 per cent above their February levels in August. In Manitoba, manufacturing sales rose 5.9 per cent. Sales were up in 16 subsectors, led by the machinery industry. 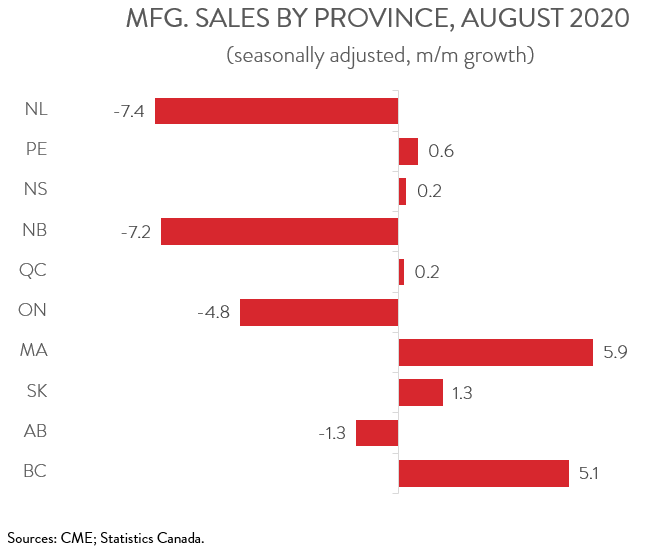 INVENTORY-TO-SALES RATIO TICKS UP IN AUGUST

Total manufacturing inventories inched up 0.2 per cent to $86.6 billion in August, the first increase in five months. This, combined with the decrease in sales, pushed up the inventory-to-sales ratio from 1.62 in July to 1.65 in August. This ratio represents the number of months it would take to completely clear inventories assuming sales remain at their current level. 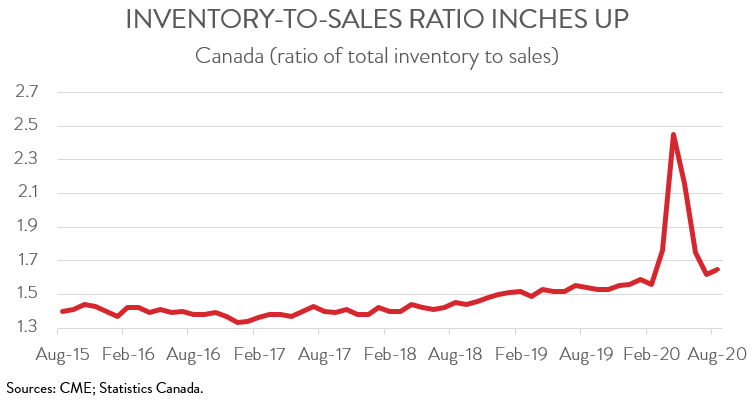 Forward-looking indictors were discouraging. Unfilled orders fell 1.7 per cent to $91.1 billion, down for the fifth consecutive month. The aerospace industry was largely responsible for the August decline. In fact, excluding aerospace, unfilled orders rose 0.8 per cent.

Following three straight monthly gains, new orders fell 3.4 per cent to $50.9 billion. As with unfilled orders, the decline was mostly attributable to the aerospace industry. They were down a more modest 0.4 per cent when excluding aerospace. 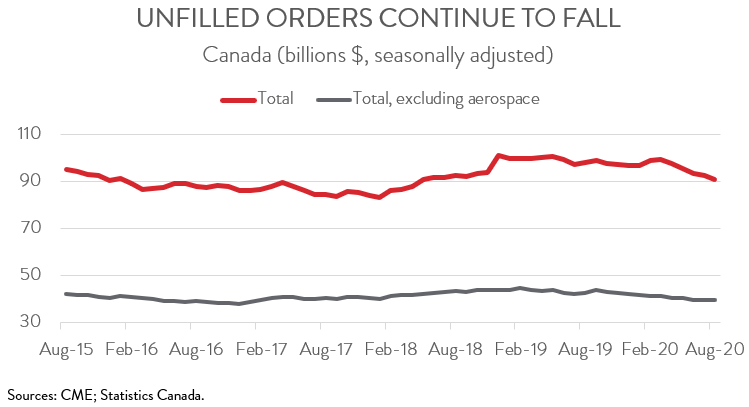 Finally, the manufacturing sector’s s capacity utilization rate rose for the fourth straight month, increasing from 74.0 per cent in July to 75.8 per cent in August. The rate continues to edge closer to its February 2020 level of 76.8 per cent. 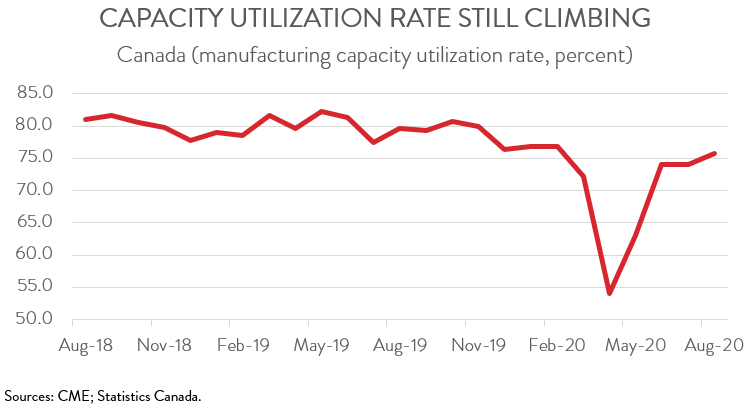