Manufacturing Sales Bounce Back in September

Manufacturing sales rose 1.5 per cent to $53.8 billion in September, fully offsetting the losses recorded in August. Sales in constant dollars were up an even stronger 2.1 per cent, indicating that a larger volume of products was sold in that month. 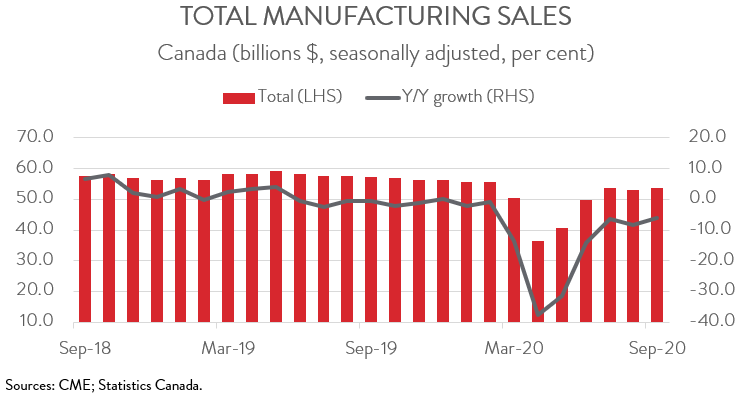 All in all, this was a positive report, especially with sales rising and, as we shall see, forward-looking indicators pointing upwards. But, just like the overall economy, the recovery in manufacturing is losing steam as pent-up demand diminishes and as COVID-19 cases continue to rise at troubling rates. Manufacturing sales remain 3.6 per cent below pre-pandemic levels, and the path back to full recovery will be long and difficult.

Sales were up in 7 of 11 major industries. The aerospace industry was alone in experiencing a double-digit gain, with sales rising 10.7 per cent to $1.9 billion. However, despite this increase, sales were still 13.5 per cent below their February 2020 levels.

The wood products sector continued to benefit from very strong housing demand in both Canada and the United States, with sales climbing 9.6 per cent to reach a record high of $3.3 billion. At the same time, sales in the chemical industry rose 6.7 per cent to $4.5 billion, driven by higher pharmaceutical and medicine sales. Likewise, food industry sales increased 1.3 per cent to $9.2 billion, with all subsectors except meat contributing to the gain. Of the 11 major industries we are tracking, these are the only three to have seen their sales surpass their pre-pandemic levels. 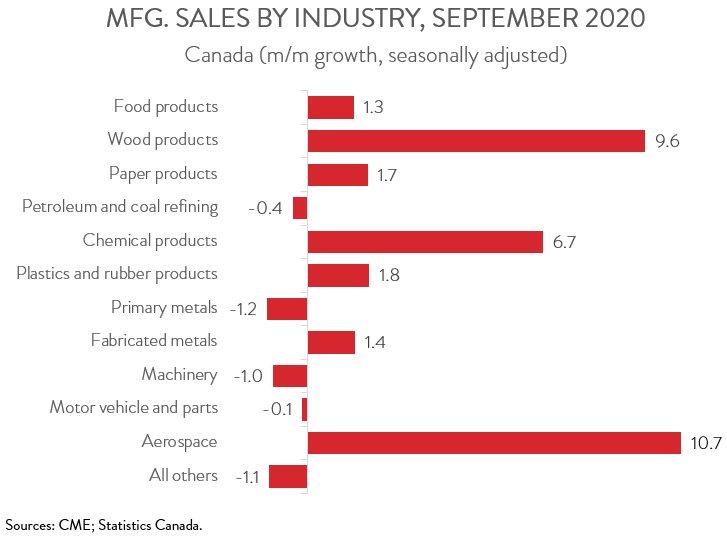 Although sales were down in five major sectors in September, the declines were relatively modest. Sales in the petroleum and coal products industry dipped 0.4 per cent to $3.8 billion, leaving them nearly 32 per cent below their February 2020 levels. This sector, which has experienced some of the sharpest declines in activity, has also recovered the least.

The increase was broad-based geographically, spanning 9 of 10 provinces. Alberta was the biggest contributor to growth, with sales up 3.9 per cent to $5.4 billion in September. The increase was attributable to higher sales of chemical and wood products. However, despite this gain, sales in the province were still 12.6 per cent below their pre-pandemic levels.

In addition, sales in Ontario climbed 0.6 per cent to $25.2 billion, partly offsetting a 5.0 per cent decline in August. The chemicals sector was a key source of strength. New Brunswick was another growth leader in September. Its sales rose 13.2 per cent to $1.3 billion, mostly due to higher sales of non-durable goods. In contrast, sales in Saskatchewan were down 2.2 per cent, reflecting lower sales of non-durable goods. 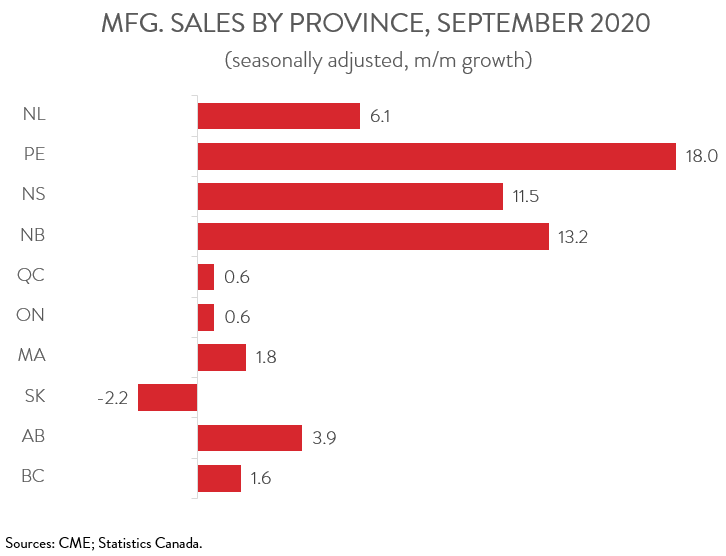 Total manufacturing inventories increased 0.7 per cent to $87.0 billion in September, the second straight monthly gain. This, combined with the increase in sales, allowed the inventory-to-sales ratio to remain relatively stable, edging down from 1.63 in August to 1.62 in September. This ratio represents the number of months it would take to exhaust inventories assuming sales remain at their current level. 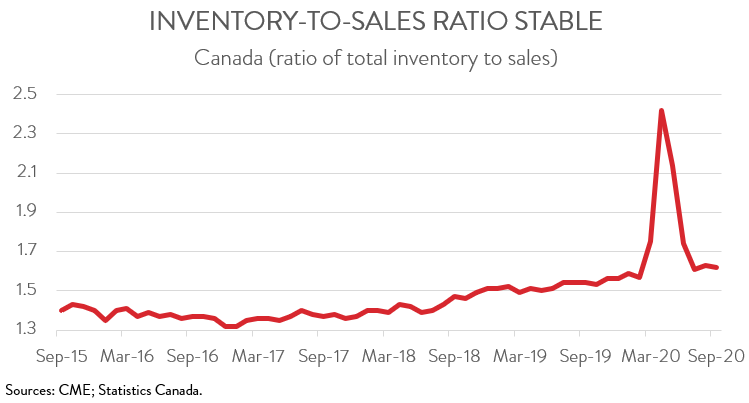 Forward-looking indictors sent positive signals in September. Unfilled orders rose 0.3 per cent to $92.1 billion, its first increase in six months. The transportation equipment and primary metals industries were primarily responsible for the increase.

New orders were up for the fifth time in six months, climbing by 3.6 per cent to $54.1 billion. The increase was largely attributable to higher new orders of transportation equipment, wood products, and food. 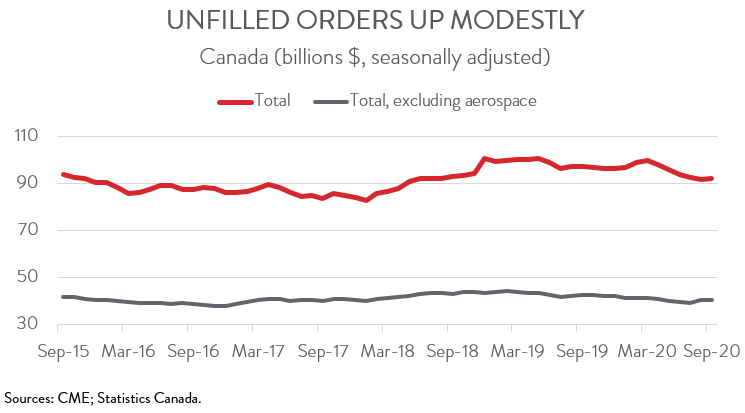 Finally, in more good news, the manufacturing sector’s capacity utilization rate jumped from 75.5 per cent in August to 78.5 per cent in September, surpassing its February 2020 level of 76.4 per cent. 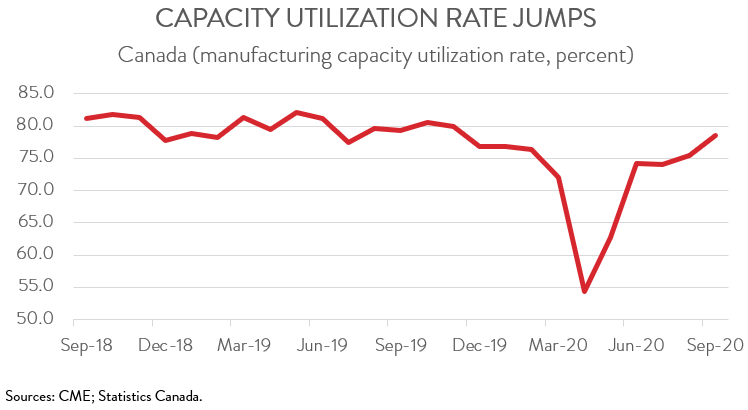