After hitting a new monthly high in May, manufacturing output across Canada retreated in June with lower sales in almost every major product category. On top of that, both new and unfilled orders fell back as well, pointing to slower demand in the coming months.

Manufacturing sales fell by 1.2 per cent in June, erasing most of the gains made the previous month. Total sales dipped from (a revised) $58.7 billion in May to $58.0 billion in June. The drop was largely the result of manufacturers receiving lower prices for their goods; volume-based manufacturing output was down by just 0.2 per cent compared to May. 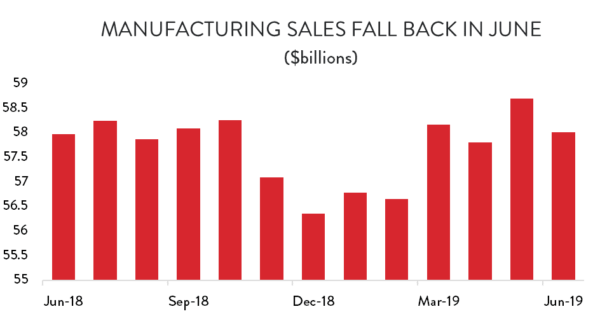 The decline brought overall sales levels down to almost exactly where there were a year ago. Year-over-year sales growth sat at just 0.1 per cent in June, owing to a combination of spotty growth in recent months and a surge in output at this same point last year. However, manufacturing activity plateaued last summer and fell back in the last two months of 2018, so very little growth will be needed in the coming months to keep year-over-year sales growth in positive territory. 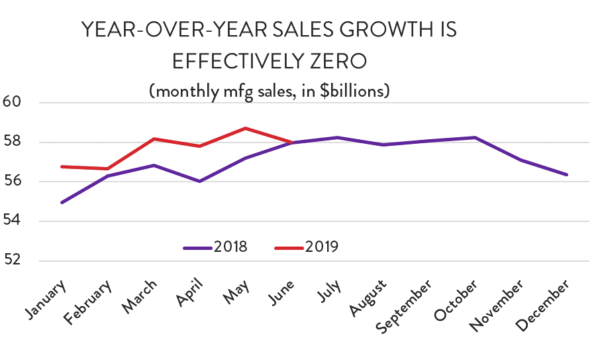 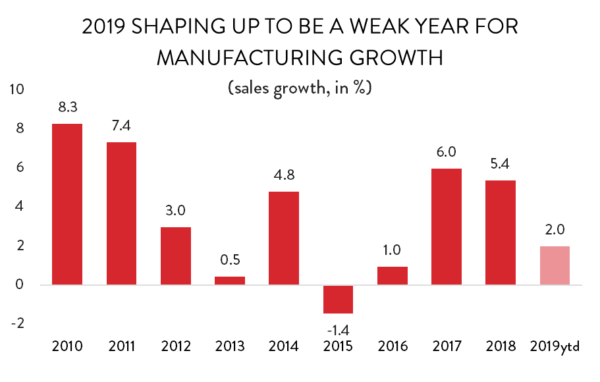 The dip in output was compounded by a general decline in forward-looking manufacturing indicators in June. New (non-aerospace) manufacturing orders were down significantly compared to May – dropping by 2.5 per cent ($1.4 billion). New orders had surged in May but retreated right back to levels seen earlier in the year. In fact, new orders have fallen to their lowest level since January. They are about 3.4 per cent below their recent October peak and 2.5 per cent lower than they were a year ago. 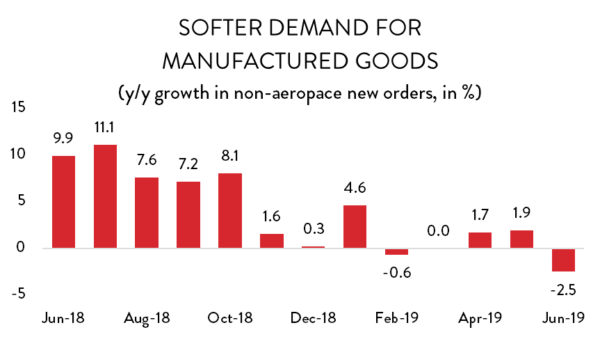 Meanwhile, the downward trend in unfinished manufacturing orders continued in June. Because of a surge in new orders throughout much of last year, the backlog of unfinished work (not including aerospace) was steadily rising, peaking in February at $44.7 billion. Since that time, flat new orders have allowed manufacturers to put a considerable dent in that backlog. Unfilled orders fell by 1.8 per cent in June and are 4.5 per cent below February’s peak. 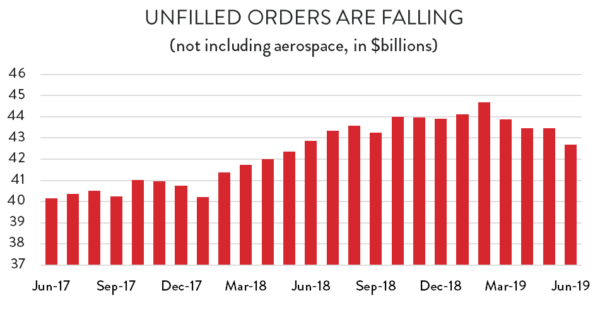 The decline in output in June was widespread, with only one of the 11 major manufacturing sub-sectors posting higher sales compared to May. That lone bright spot was primary metals where, thanks in part to the removal of US tariffs on Canadian aluminum and steel, output surged by 11.7 per cent. That increase brings primary metals production back up to about where it was before the tariff drama began. 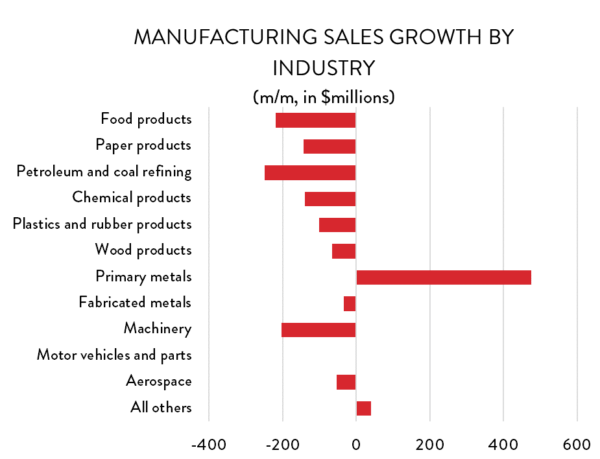 Elsewhere, motor vehicles and parts output was flat compared to May but every other major industry saw sales decline. On a dollar-value basis, the largest drop was in petroleum refining ($249 million), followed closely by food processing ($219 million) and machinery ($209 million).

At the provincial level, central Canada was able to squeeze out modest production gains – thanks in part to the surge in primary metals production – while output was down considerably in Atlantic and western Canada.

Quebec saw the largest increase, with output rising by $141 million (1.0 per cent) compared to May. Growth was more modest in Ontario, where sales were $62 million (0.2 per cent) higher than they were the previous month. 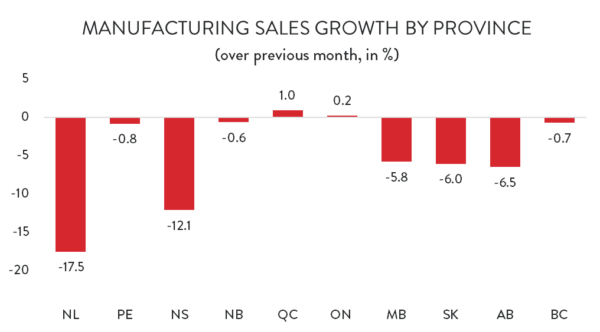 Sales were down in every other province. On a dollar-value basis, the most severe decline by far was in Alberta where output plunged by $448 million (6.5 per cent), erasing more than two months’ worth of solid gains. On a percentage basis, the biggest drop was in Newfoundland and Labrador, where output fell by 17.5 per cent, wiping out a similar-sized increase the previous month. Manufacturing activity was also down considerably in Nova Scotia, Manitoba and Saskatchewan.