Factory Sales Bounce Back in March

Manufacturing sales rose 3.5% to $57.8 billion in March, the highest level since June 2019. Sales were up 3.7% compared to the pre-pandemic level and 14.8% compared to the same month one year ago. The picture was also bright when stripping out price effects. In constant dollar terms, manufacturing shipment volumes climbed 2.3% in March. 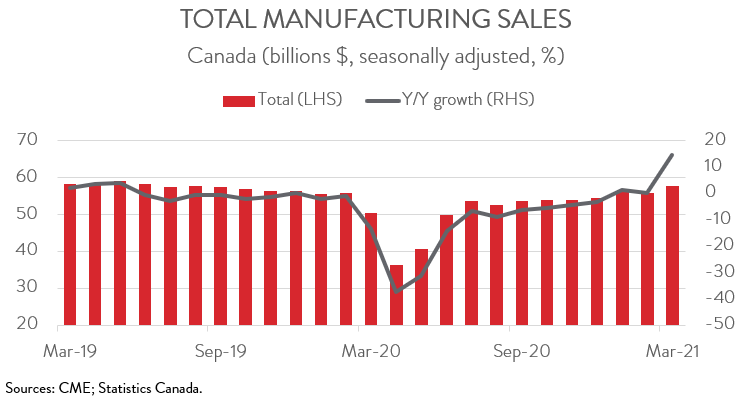 While today’s data release offered encouraging news for manufacturers, forward-looking indicators were mixed. At the same time, supply chain disruptions remain an ongoing concern, especially with respect to the impact of the global semiconductor shortage on the auto sector. However, notwithstanding these near-term challenges, the sector’s medium-term outlook remains upbeat, with pandemic-related restrictions expected to ease in the coming months and with the US economy gathering steam.

SALES UP IN ALL MAJOR INDUSTRIES…

The gains were shared by all 11 major industries in March. After two straight monthly declines, sales of motor vehicles and parts climbed 9.0% to $6.3 billion in March. The auto industry has been hit very hard by a global shortage of semiconductors, but it was able to temporarily ramp up production in March. However, some car manufacturers in Ontario slashed production once more in April, indicating that the microchip shortage will continue to weigh down manufacturing activity at least over the near term.

Meanwhile, sales in the petroleum and coal products industry increased for the sixth straight month, up 6.2% to $5.3 billion. The gain was mainly attributable to higher prices, though shipment volumes also rose 2.7%. 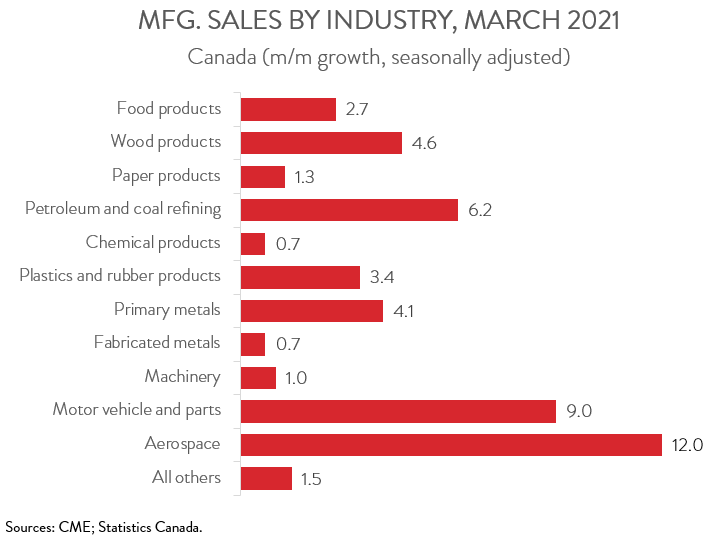 Likewise, food product sales were up for the fifth consecutive month, rising 2.7% to a record high of $9.8 billion in March. Sales rose in all sub-industries, led by meat, dairy, and grain and oilseed milling manufacturing.

The wood products industry continues to enjoy boom conditions. Sales climbed 4.6% to a record high of $4.5 billion in March on higher prices. Accordingly, sales were up 21.5% in the first quarter. The industry is benefitting from higher demand from the United States as well as robust housing market activity in Canada.

…AND IN ALL PROVINCES

Sales were also up in all 10 provinces. Ontario posted the largest gain, with sales increasing 2.9% to $25.1 billion in March, led by the motor vehicle and petroleum and coal industries. However, despite this gain, the province’s sales in March were 3.5% below the pre-pandemic level.

Quebec also enjoyed a big increase in sales in March, up 2.4% to $14.5 billion. The growth was mainly attributable to higher sales of medical equipment and supplies as well as aerospace products and parts. The gain in March pushed the province’s sales 6.6% above the February 2020 level. 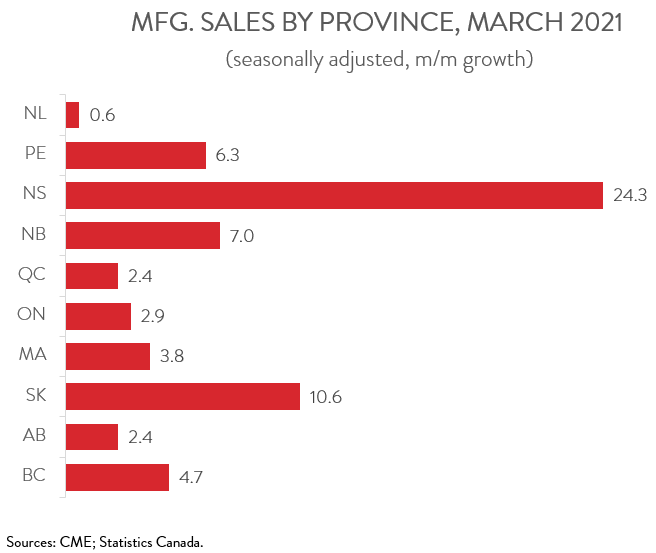 Factory sales in Nova Scotia and Saskatchewan both increased at a double-digit pace in March, rising 24.3% and 10.6%, respectively. Sales growth elsewhere was more moderate, ranging from 6.3% in PEI to 0.6% in Newfoundland and Labrador. Even with the uptick in March, Newfoundland and Labrador remains the furthest from a full recovery, with sales 30.9% below the pre-pandemic level.

Following two consecutive increases, total inventories fell 0.4% to $88.2 billion in March on lower inventories of aerospace products and parts and of machinery. This, combined with the increase in sales, pushed down the inventory-to-sales ratio from 1.59 in February to 1.53 in March. This ratio represents the number of months it would take to exhaust inventories assuming sales remain at their current level. 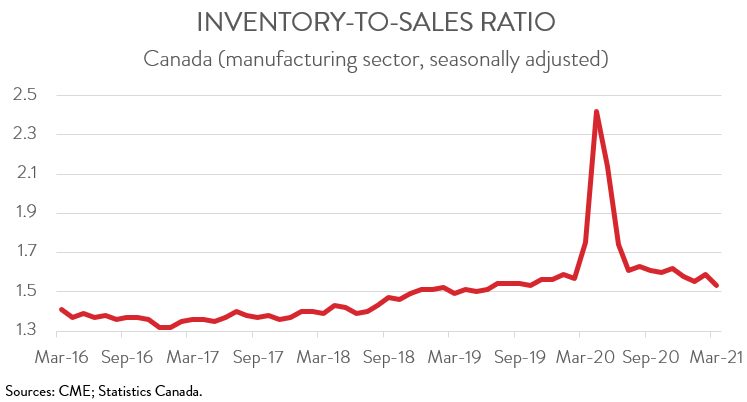 Forward-looking indictors painted a mixed picture in March. After falling 1.1% in February, unfilled orders remained unchanged at $86.6 billion. On the other hand, the total value of new orders rose 5.2% to $57.8 billion, partially rebounding from a 5.9% decline in February. According to Statistics Canada, three industries—transportation equipment, petroleum and coal, and plastics and rubber products—were mainly responsible for the gain in new orders. 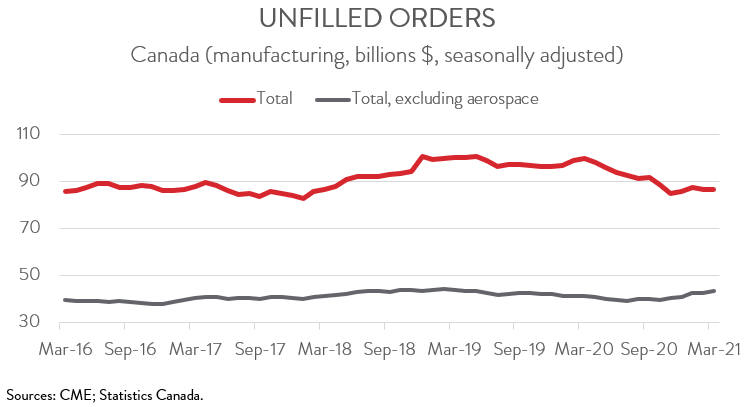 Finally, the manufacturing sector’s capacity utilization rate rose sharply from 75.5% in February to 80.1% in March, the highest rate since October 2019. 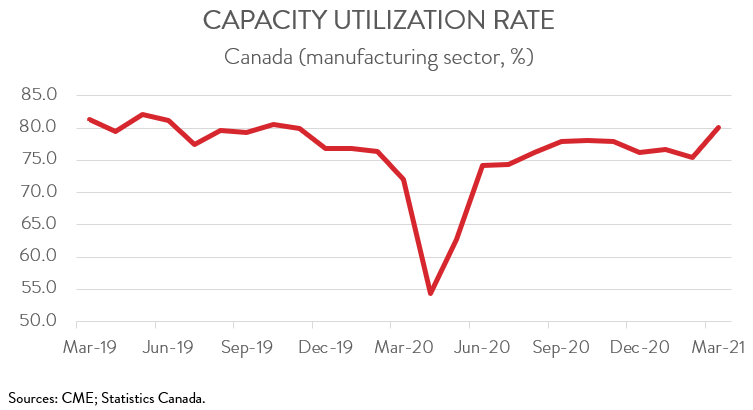