Manufacturing sales decreased 1.5% to $59.6 billion in July, down for the third time in four months. The picture was even less encouraging after stripping out price effects. In constant dollar terms, manufacturing sales fell 1.7%, indicating a lower volume of goods sold. 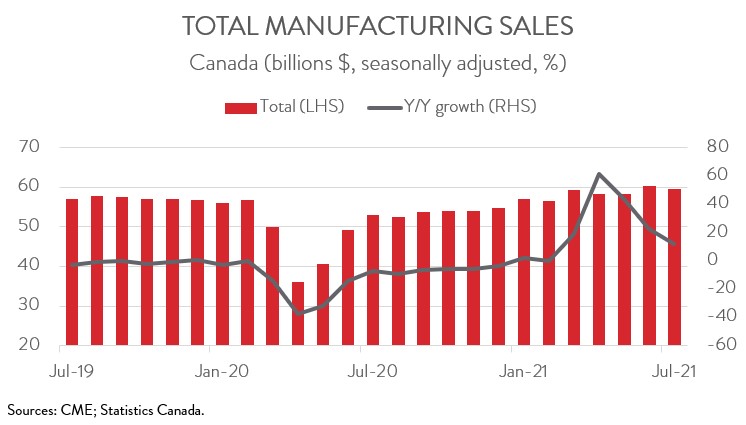 Today’s data release provided yet more evidence that the manufacturing sector’s recovery has stalled in recent months. While the IHS Markit Canada Manufacturing Purchasing Managers’ Index (PMI) shows that Canadian manufacturers remain upbeat about their prospects for growth, the sector’s outlook is clouded by ongoing supply chain disruptions, labour shortages, and the economic effects of the Delta variant.

The decline in sales spanned 6 of 11 major industries. Following a 5.8% decline in June, sales of wood product tumbled 21.8% to $4.0 billion in July, driven by a lower volume of sales and prices. Despite the recent declines, wood product sales were up 46.0% compared to the same month last year.

The aerospace industry also had a tough month in July, with sales falling 19.0% to $1.3 billion. With this decline, sales of aerospace products and parts were 19.2% below year-ago levels and 40.5% below pre-pandemic levels.

Sales of petroleum and coal products fell 2.3% to $5.8 billion, with lower volumes more than offsetting higher prices. On a year-over-year basis, sales were up 63.7%. 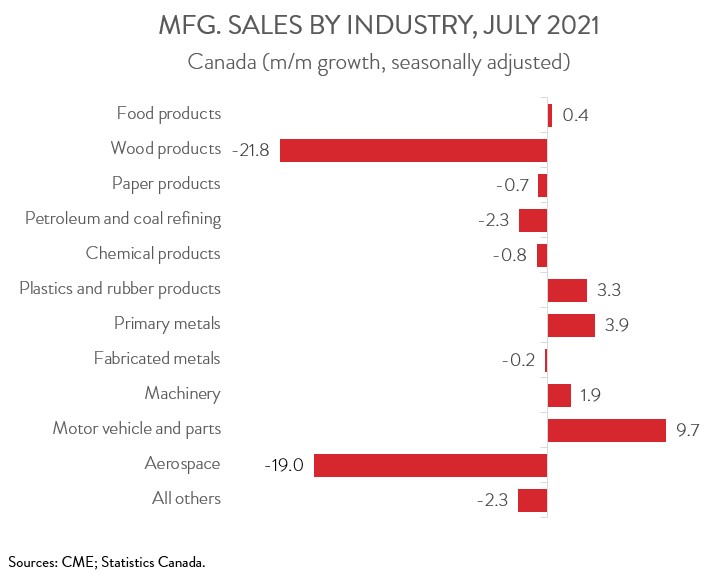 On the positive side of the ledger, motor vehicle and parts sales increased 9.7% to $6.0 billion in July, building on the 17.7% gain in June. As noted by Statistics Canada, auto companies scaled back their summer shutdown plans to avoid further production cuts due to the global semiconductor chip shortage.

Primary metal sales rose for the fifteenth month in a row in July, up 3.9% to a record high of $5.6 billion. Higher prices were responsible for the gain as sales in constant dollars edged up 0.1%.

QUEBEC AND BC RECORD LARGEST DECLINES

Regionally, sales were down in 6 of 10 provinces, led by Quebec and BC. Ontario posted the largest sales increase.

Sales in Quebec fell 3.5% to $15.0 billion, the third decline in four months. The decline in July was driven by the wood product and aerospace industries. 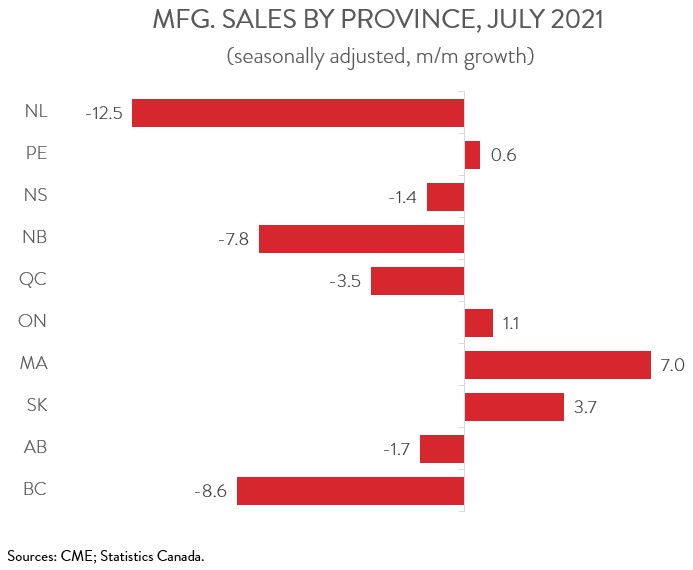 In BC, sales fell for the first time in three months, down 8.6% to $5.1 billion on lower sales of wood, primary metal, and paper products. Despite this decline, sales in the province were up 20.4% year-over-year.

On the bright side, sales in Ontario rose 1.1% to $25.8 billion in July, building on the 5.1% increase in June. The motor vehicle and parts and plastic and rubber products industries were the main drivers of growth. Still, Ontario is the only province where sales are down on a year-over-year basis.

Total inventories rose 2.6% in July to a record high of $93.9 billion, the seventh consecutive monthly increase. With inventories increasing and sales falling, the inventory-to-sales ratio rose from 1.51 in June to 1.58 in July. This ratio represents the number of months it would take to completely clear inventories assuming sales remain at their current level. 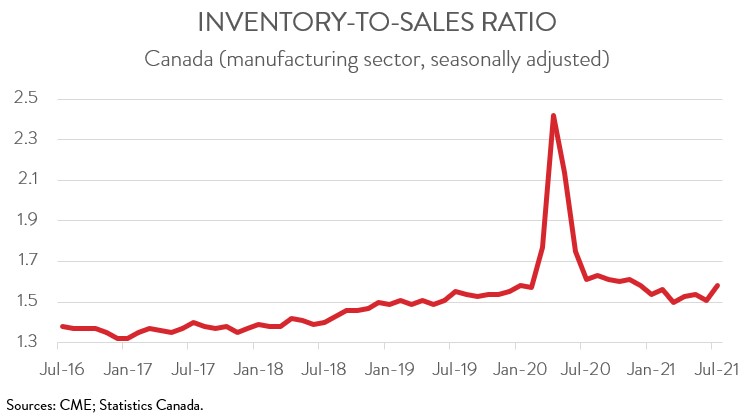 Forward-looking indictors were mixed. The total value of unfilled orders increased 0.6% to $89.4 billion in July, the third straight monthly gain. The increase was mostly due to higher unfilled orders of machinery and aerospace products.

On the other hand, the total value of new orders decreased 2.6% to $60.1 billion in July, extending the 5.5% decline in June. July’s drop was mainly attributable to lower new orders of wood products. 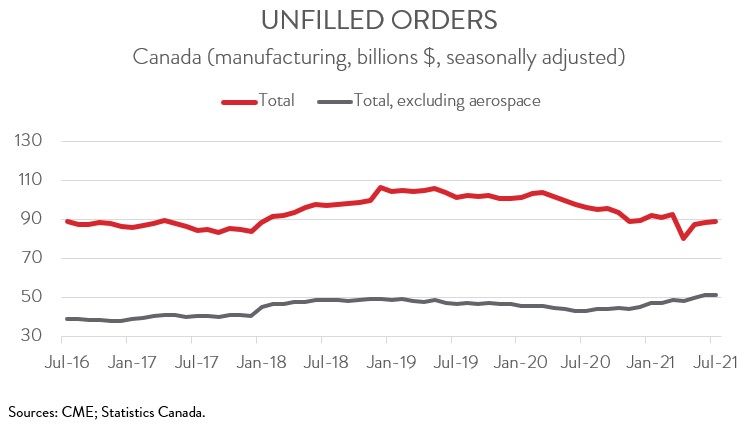 Finally, the manufacturing sector’s capacity utilization rate decreased from 79.3% in June to 76.7% in July on lower production. 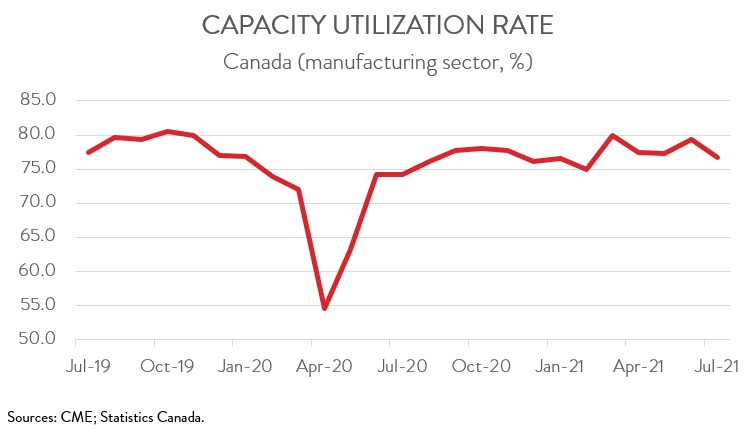