Manufacturing sales rebounded in October, rising 4.3% to $61.2 billion, following a 2.8% decline in September. The picture was still positive after stripping out price effects. In constant dollar terms, factory sales were up 3.1% on the month, indicating a higher volume of goods sold. 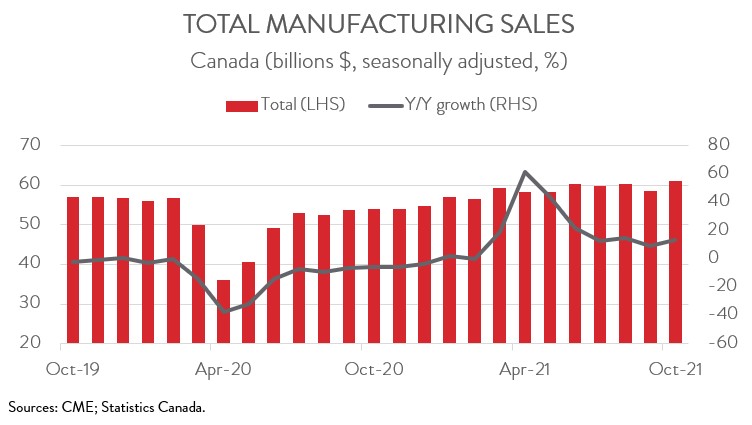 Although manufacturing sales posted a solid rebound in October, sales over the near term will likely be weighed down by the devastating BC floods, which have further exacerbated the supply chain disruptions plaguing the industry.

The increase in sales was widespread, spanning 9 of 11 major industries. Even though the auto sector continues to be hobbled by the global semiconductor shortage, sales of motor vehicles and parts jumped 38.6% to $5.6 billion in October, bouncing back from a 25.5% decline in September. Nevertheless, despite the rebound, sales of motor vehicles and parts were down 28.2% compared to February 2020 and were 24.3% lower on a year-over-year basis. Microchips are expected to be hard to come by until mid-2022, so a full recovery for the auto sector is still a long way off.

Sales of primary metals rose 4.0% to $5.4 billion in October, attributable to record high sales of alumina and aluminum products. Prices of unwrought aluminum and aluminum alloy products surged after China began restricting electricity consumption of energy-intensive sectors to reduce carbon emissions and reserve electricity for residents ahead of the winter. On a year-over-year basis, total sales in the primary metal industry were up 41.3%. 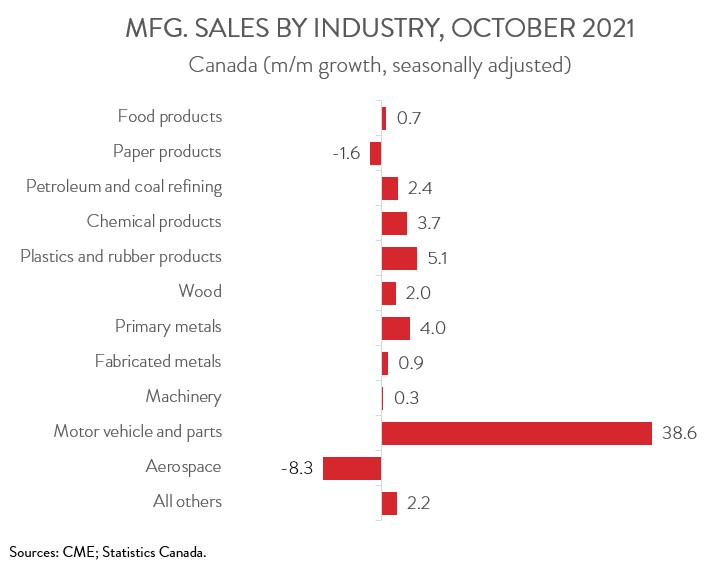 Sales of chemical products rose to their highest level on record in October, up 3.7% to $5.3 billion on higher prices and volumes. The gains were driven by the basic chemical and pesticide, fertilizer and other agricultural chemical industries. As noted by Statistics Canada, strong food demand, coupled with the higher cost of natural gas—an important feedstock to fertilizer production—have led to a dramatic rise in fertilizer prices in recent months.

On the negative side, sales of aerospace products and parts fell 8.3% to $1.4 billion in October, the third decline in four months. Accordingly, sales were 40.2% below their pre-pandemic level and down 11.8% compared to the same month a year ago.

Also, paper product sales decreased 1.6% to $2.4 billion, down for the second straight month. However, despite this decline, sales were 6.4% above their pre-COVID level and up 2.7% year-over-year.

ONTARIO AND ALBERTA BIGGEST CONTRIBUTORS TO GROWTH IN OCTOBER

Regionally, sales were up in 6 of 10 provinces. Sales in Ontario increased 8.6% to $27.2 billion in October, as higher sales of motor vehicles and parts more than offset sales declines in aerospace products and parts and in petroleum and coal products. 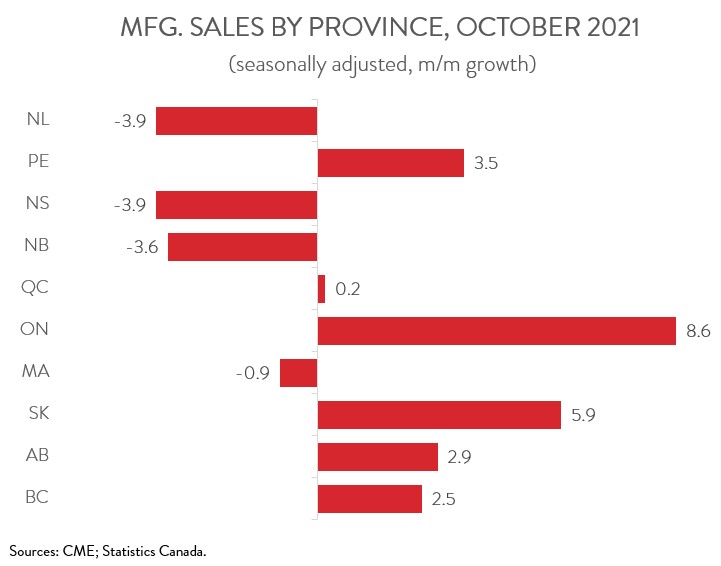 In Alberta, sales increased 2.9% to $7.2 billion, the first increase in five months. The gain was attributable to higher sales of petroleum and coal, machinery, and wood products. Lower sales of food products acted as a partial offset. Despite the recent downward trend, which was finally halted in October, year-over-year sales were still up 32.9%.

At the other end of the spectrum, sales in New Brunswick decreased 3.6% to $1.5 billion in October on lower sales of non-durable goods. However, despite this decline, sales were up 9.7% year-over-year.

Total inventories increased for the tenth month in a row in October, up 1.5% to an all-time high of $99.6 billion. Still, the inventory-to-sales ratio decreased from 1.67 in September to 1.63 in October. This ratio represents the number of months it would take to completely clear inventories assuming sales remain at their current level. 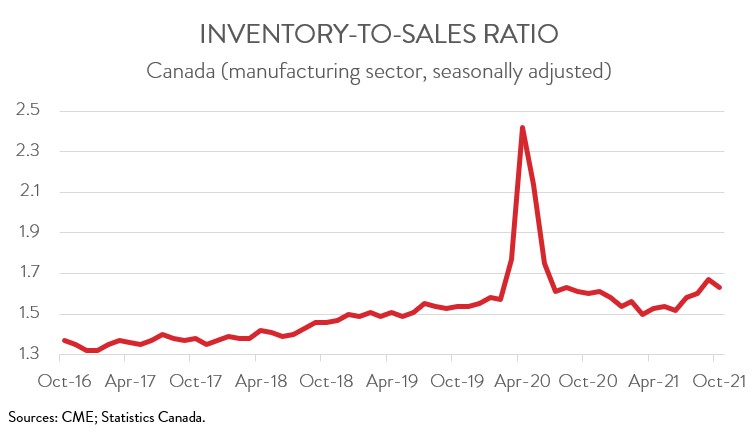 Forward-looking indictors were mixed. The total value of unfilled orders edged down 0.1% to $95.4 billion in October, mostly due to lower unfilled orders of fabricated metals and aerospace products and parts. Year over year, unfilled orders were up 1.8%.

On the other hand, the total value of new orders rose 1.9% to $61.1 billion in October, mainly attributable to higher new orders of transportation equipment. New orders were up 18.1% on a year-over-year basis. 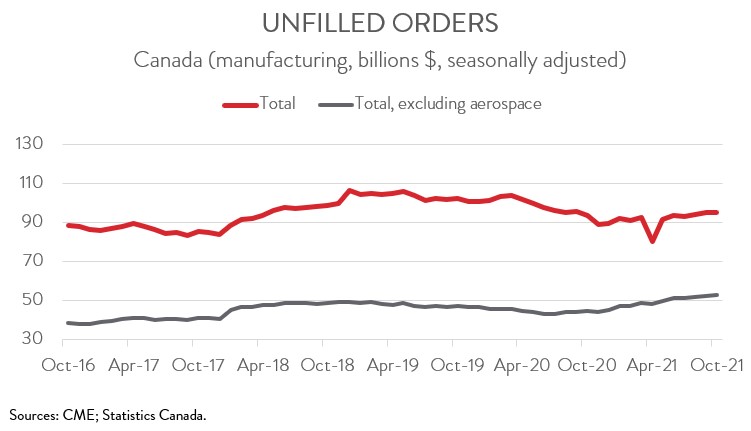 Finally, the manufacturing sector’s capacity utilization rate increased from 74.7% in September to 77.1% in October. The increase in this indicator was led by higher production in the transportation equipment, chemical, and fabricated metal industries. 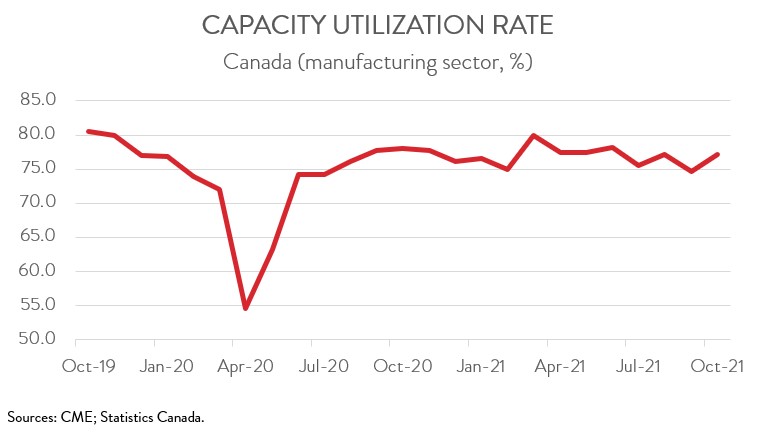