MANUFACTURING SALES UP 2.6% IN NOVEMBER

Manufacturing sales rose 2.6% to $63.1 billion in November, following a 4.6% increase in October. The picture was still positive after stripping out price effects. In constant dollar terms, factory sales were up 1.9% on the month, indicating a higher volume of goods sold. 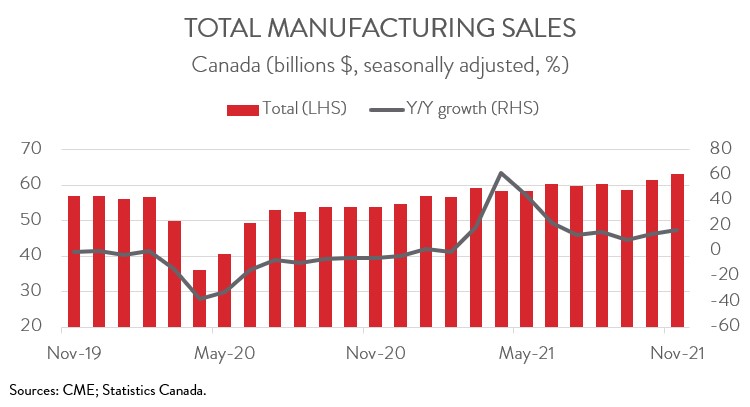 This was an overall solid report. The 1.9% increase in shipment volumes implies that the manufacturing sector posted solid GDP growth in November, building on the healthy gains registered in October. Even more impressive, the sales gain came despite the severe flooding in BC that disrupted supply chains across Western Canada. Nevertheless, the manufacturing sector’s near-term outlook is mixed. While demand conditions are strong, manufacturers continue to be challenged by supply chain disruptions, workforce shortages, and rising production costs.

The increase in sales was widespread, spanning 10 of 11 major industries. Sales of primary metal products rose 5.8% to a record $5.8 billion in November, largely driven by higher sales of non-ferrous metals and iron and steel mills and ferro-alloy products. On a year-over-year basis, sales in the primary metal industry were up 47.7% in November.

Sales in the petroleum and coal industry rose 3.7% to a record $7.2 billion in November, the sixth consecutive monthly gain. The sector continues to benefit from growing demand for petroleum products as pandemic-related restrictions gradually ease, notwithstanding the new measures imposed to combat the Omicron variant. Year-over-year, petroleum and coal product sales were up 73.3% in November. 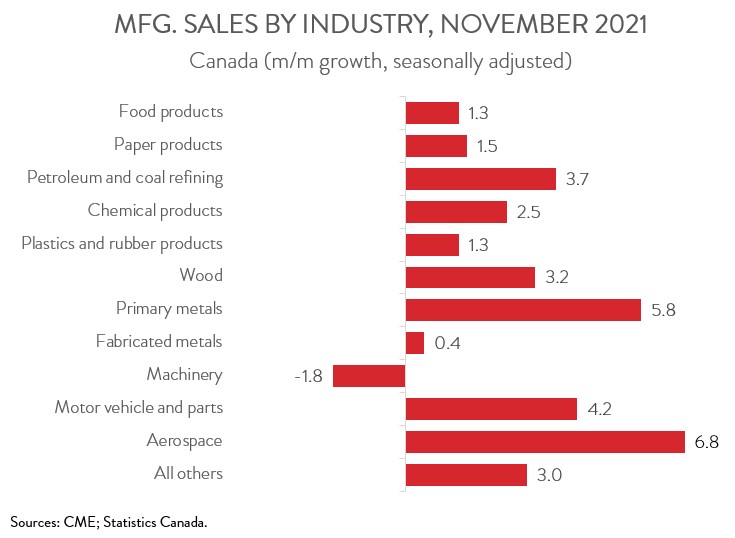 Even though the auto sector continues to be hobbled by the global semiconductor shortage, sales of motor vehicles and parts increased 4.2% to $5.9 billion in November, building on the 38.9% gain in October.

Nevertheless, despite these back-to-back gains, sales of motor vehicles and parts were down 24.5% compared to February 2020 and were 15.2% lower on a year-over-year basis. As noted by Statistics Canada, semiconductors chips are expected to remain in short supply for the foreseeable future. To make matters worse, the Omicron variant has the potential to further hinder semiconductor production in Asia.
Notable increases were also reported in the food manufacturing (+1.3%), chemical (+2.5%), and wood product (+3.2%) industries in November.

Among major subsectors, only the machinery industry (-1.8%) recorded a dip in sales on the month. However, despite this decline, sales were 8.9% higher than the same month a year ago.

QUEBEC, ALBERTA, AND ONTARIO BIGGEST CONTRIBUTORS TO GROWTH IN NOVEMBER

Regionally, sales were up in 7 of 10 provinces. Sales in Quebec rose 6.7% to $16.5 billion in November. Gains were broad-based, with the primary metal and chemical industries making the biggest contributions to growth.

In Alberta, sales were up 4.2% to $7.6 billion in November, attributable to higher sales of petroleum and coal products and food. According to Statistics Canada, the increase in petroleum and coal sales was partly due to the resumption of production at a major refinery in November following maintenance stoppages in October. 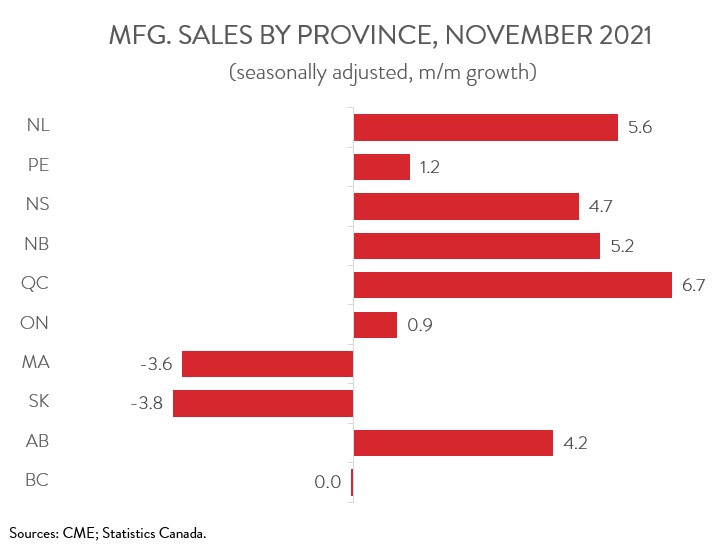 Sales in Ontario climbed 0.9% to $27.5 billion in November, thanks to higher sales of motor vehicle parts, food, and non-metallic minerals. These gains were partially offset by a measurable decline in machinery sales.

At the other end of the spectrum, Saskatchewan posted the largest decrease in sales in November, down 3.8% to $1.7 billion. The downturn was driven by lower sales of machinery and food. The slump in food sales, in turn, was attributable to lower production in the oil seed manufacturing sector. The province’s canola harvest took a big hit from the extreme heat and drought conditions over the 2021 growing season.
It is also worth noting that sales in BC were flat in November, despite the flooding that hit the province during the month.

Total inventories increased for the eleventh month in a row in November, up 1.2% to an all-time high of $100.8 billion. Nevertheless, the inventory-to-sales ratio edged down from 1.62 in October to 1.60 in November. This ratio represents the number of months it would take to completely clear inventories assuming sales remain at their current level. 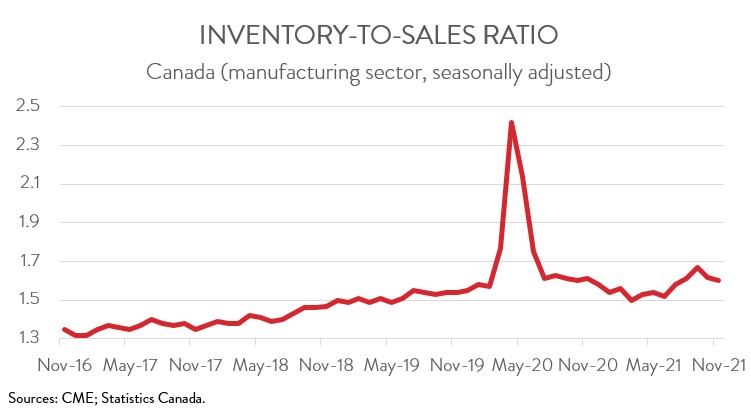 Forward-looking indictors were positive. The total value of unfilled orders climbed 0.4% to $95.8 billion in November, mostly due to higher unfilled orders of machinery and computers and electronics. Unfilled orders were up 7.7% on a year-over-year basis.

At the same time, the total value of new orders rose 3.0% to $63.4 billion, mainly attributable to higher new orders of transportation equipment and primary metals. Year-over-year, new orders were up 29.1%. 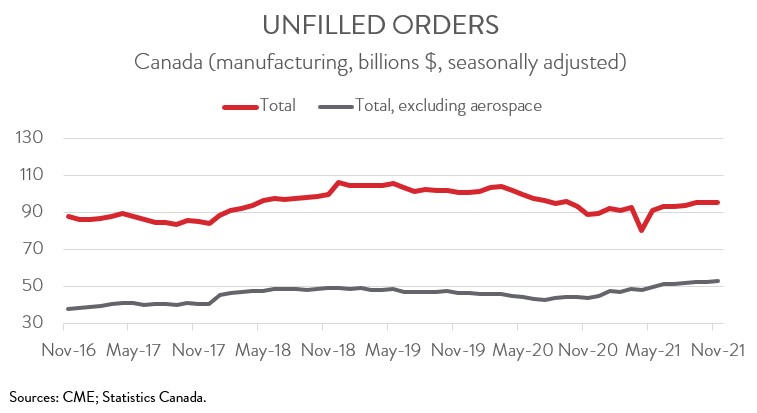 Finally, the manufacturing sector’s capacity utilization rate increased from 76.4% in October to 78.8% in November, the highest level since March 2021. The increase was led by higher production in the petroleum and coal, transportation equipment, and computer and electronic product industries. 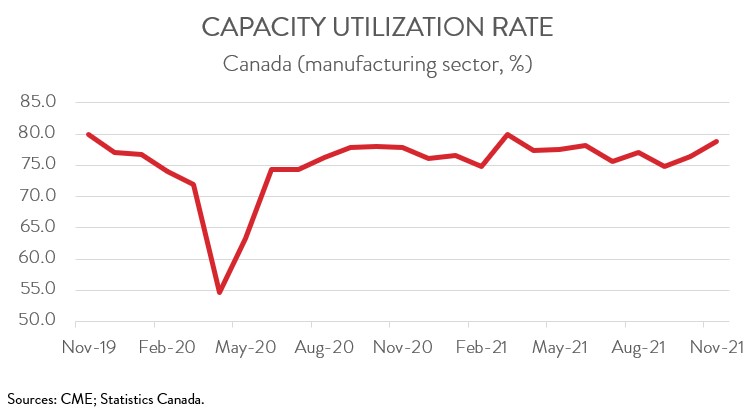