Manufacturing sales increased for the fifth consecutive month in February, up 4.2% to a record high of $67.7 billion. In constant dollar terms, factory sales were up 2.2% on the month, indicating a higher volume of goods sold. 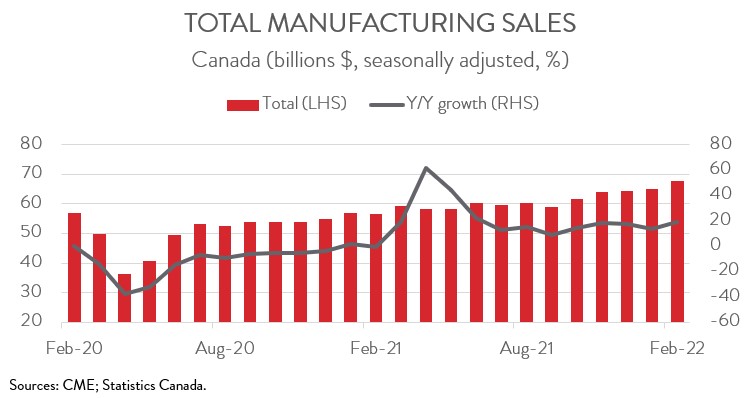 This was another in a string of solid sales reports for the manufacturing sector. That said, it is important to point out that the lion’s share of the growth in recent months has been driven by higher prices rather than higher shipment volumes. While nominal sales were up 19.5% year-over-year in February, real sales were up a more moderate 4.6%. Also, while forward-looking indicators were positive, ongoing supply chain disruptions and labour shortages continue to hamper the ability of manufacturers to increase production.

The increase in sales in February was broad-based, spanning 9 of 11 major industries. Following a 12.8% decline in January, sales of motor vehicles and parts rose 16.0% to $6.5 billion in February. The auto industry ramped up production in February despite the ongoing global semiconductor shortage and the blockade of the Ambassador Bridge in Windsor, Ontario. As the international trade data released earlier this month showed, manufacturers rerouted a good portion of their road shipments to other border crossings, although exports of motor vehicles and parts were still down 5.0% in February. 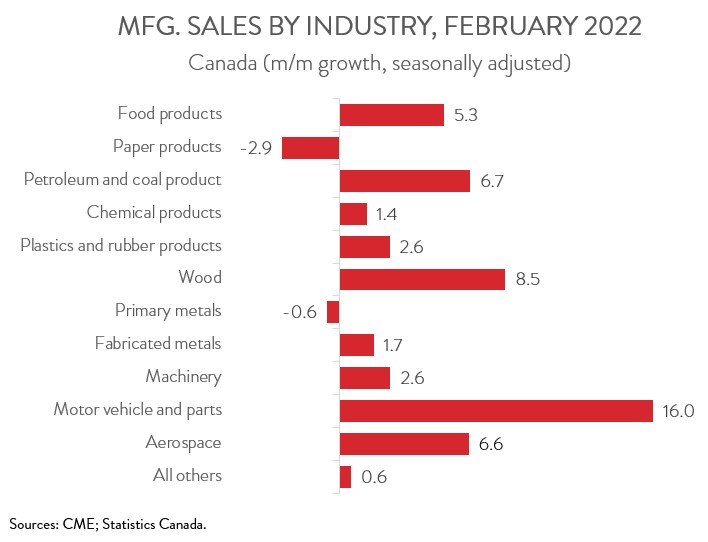 After increasing by 1.1% in January, sales of food products rose an additional 5.3% to $11.6 billion in February, attributable to higher sales of grain and oilseed milling and meat product manufacturing. The gain observed in the grain and oilseed milling industry followed three straight monthly declines caused by a shortage of canola seeds and transportation constraints due to poor weather conditions. The removal of capacity limits at restaurants contributed to the higher sales of meat products.

Sales of wood products grew 8.5% to $4.5 billion in February, the six consecutive monthly increase. The gains were driven by both higher prices and shipment volumes, with sales in constant dollars up 5.4%.

Only two industries bucked the overall trend and posted declines in February. Sales of paper products fell 2.9% to $2.5 billion, while sales of primary metal declined 0.6% to $5.4 billion. On a positive note, sales in both industries were up on a year-over-year basis.

SALES UP IN ALL PROVINCES

Regionally, sales were up in all ten provinces in February, with Ontario, Alberta, and BC leading the way. 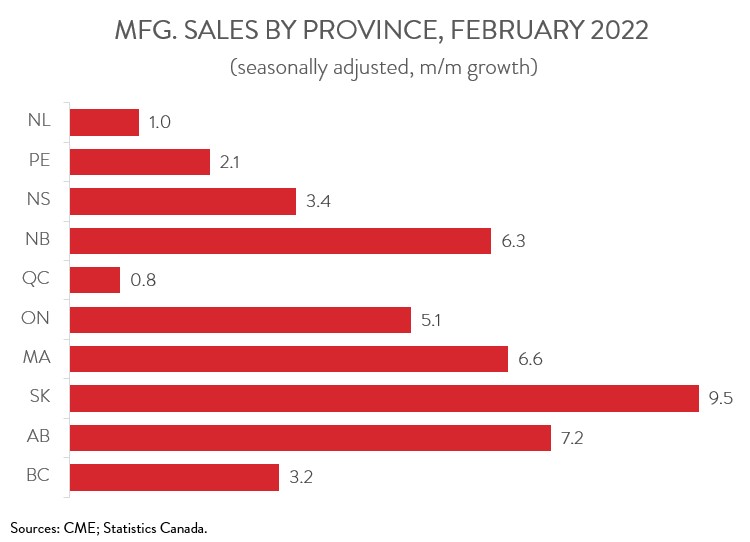 Sales in Ontario rose 5.1% to $29.1 billion in February, attributable to higher sales of motor vehicles, food, and petroleum and coal products. These gains were partly offset by lower sales of computer and electronic products.

In Alberta, sales climbed 7.2% to $8.4 billion in February, the fifth consecutive monthly increase, led by the petroleum and coal, food, and wood product industries. A decline in the sales of chemical products acted as a partial offset.

Sales in BC were up 3.2% to $5.7 billion in February, primarily on higher sales of wood products. As noted by Statistics Canada, an increase in building and construction activities, along with supply chain disruptions, resulted in higher prices and demand for softwood lumber.

INVENTORIES HIT YET ANOTHER RECORD HIGH

Total inventories rose 1.0% to a new record high of $106.7 billion in February, the fourteenth consecutive monthly increase. Inventories have been on an upward trend since January 2021, mainly attributable to a sharp rise in the price of raw materials. The gain in February was fueled in large part by higher inventories in the petroleum and coal product, primary metal, and motor vehicle industries.

Despite the accumulation of inventories, they did not outpace sales. As a result, the inventory-to-sales ratio declined from 1.63 in January to 1.58 in February. This ratio represents the number of months it would take to completely clear inventories assuming sales remain at their current level. 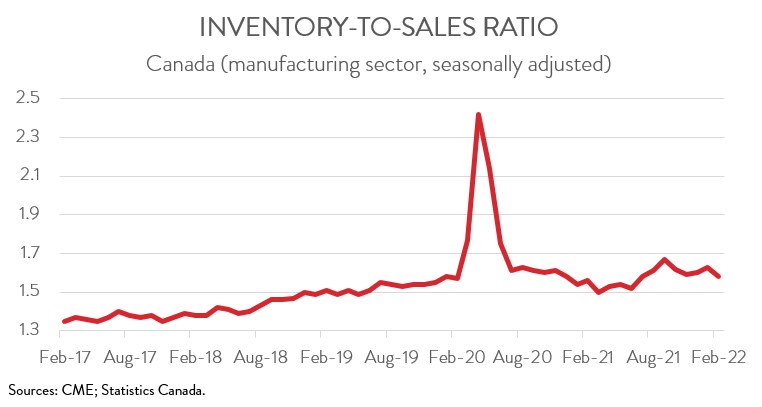 Forward-looking indictors were encouraging. The total value of unfilled orders rose 0.9% to $100.9 billion in February, the highest level since April 2020. The increase was fueled mainly by higher unfilled orders of aerospace product and parts and plastic and rubber products.

At the same time, the total value of new orders climbed for the fifth straight month, up 2.4% to $68.6 billion. The increase was led by the motor vehicle, food, and petroleum and coal product industries. 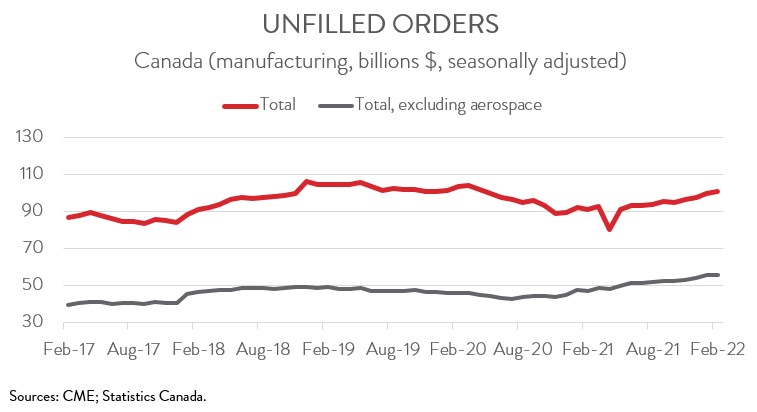 Finally, the manufacturing sector’s capacity utilization rate rose from 73.7% in January to 76.9% in February, up for the first time in three months. The gain was driven by the transportation equipment, chemical, and wood product industries. 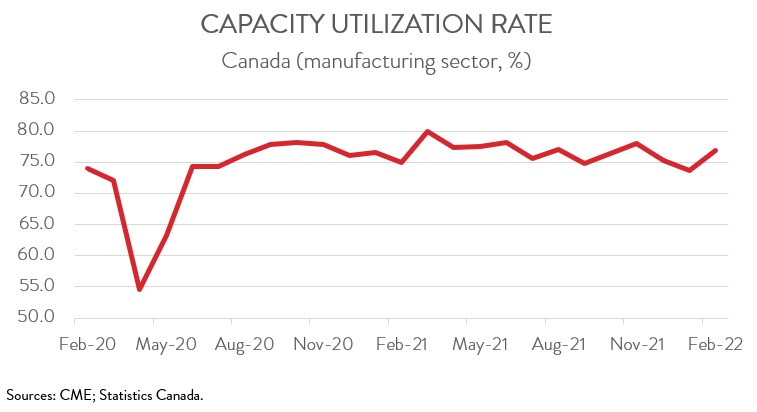