Manufacturing sales increased for the sixth consecutive month in March, up 2.5% to a record high of $70.2 billion. Sales in constant dollars were unchanged in March, indicating that the entire increase in nominal sales was driven by higher prices. 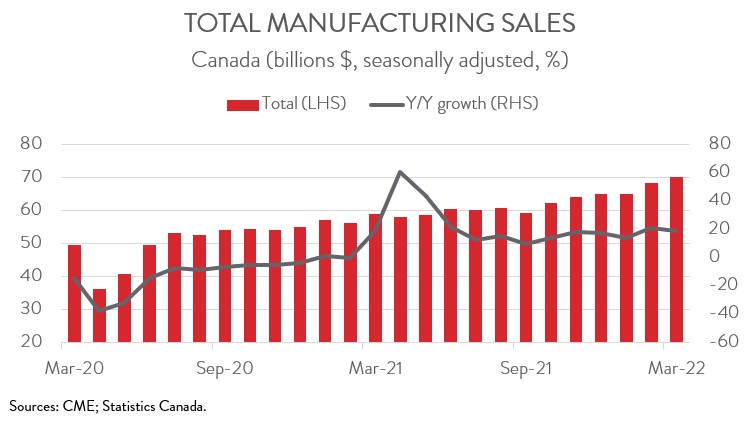 While the manufacturing sector continues to break sales records month after month, the increases have mostly been due to higher prices rather than higher volumes. In March, nominal sales were about one-quarter above their pre-pandemic level, but real sales were still 0.9% below this threshold.

The increase in sales spanned 7 of 11 major industries. The petroleum and coal product industry contributed the most to the growth, with sales up 9.1% to a record high of $9.5 billion in March. The gain was entirely the result of higher prices as volumes sold declined 1.0%. Higher demand due to the easing of COVID-19 restrictions as well as the uncertainty over energy supply due to the Russian invasion of Ukraine have been responsible for the recent jump in energy prices.

It was a similar story in the primary metal industry, with higher prices lifting sales 6.5% to a new all-time high of $5.8 billion in March. Stricter COVID-19 measures in China and Russian sanctions have led to tight global supply of primary metals and, in turn, to higher prices. 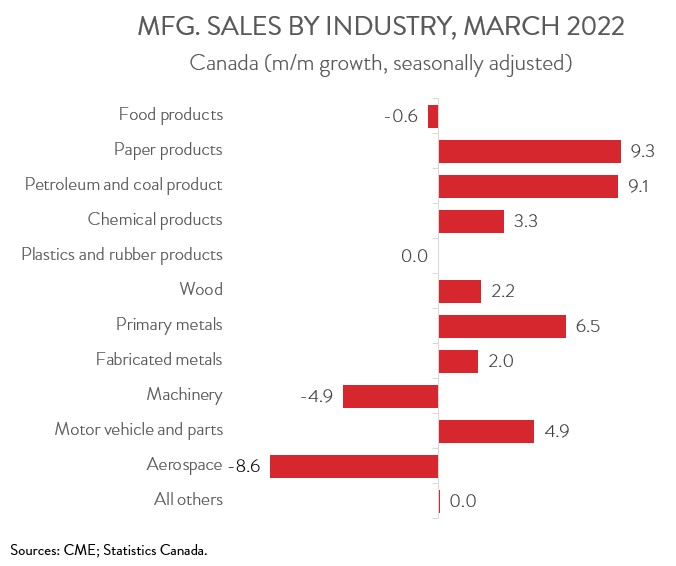 Motor vehicle and parts sales climbed 4.9% to $7.0 billion in March, building on the 20.8% gain in February. This was the highest level of sales since October 2020, another sign that supply chain disruptions in the auto sector may be easing somewhat.

Following a 2.1% decline in February, sales in the paper industry increased 9.3% to $2.7 billion in March on higher prices and volume sold. According to Statistics Canada, some paper manufacturers were able to ship their products in March following several delays due to port congestion.

On the downside, sales in the machinery industry fell 4.9% to $3.6 billion in March, the first decline in six months. At the same time, sales of aerospace products and parts decreased 8.6% to $1.4 billion, down for the third time in four months.

SALES INCREASE IN ALL PROVINCES

Regionally, sales were up in all ten provinces in March, with Ontario, Alberta, and Saskatchewan leading the way. 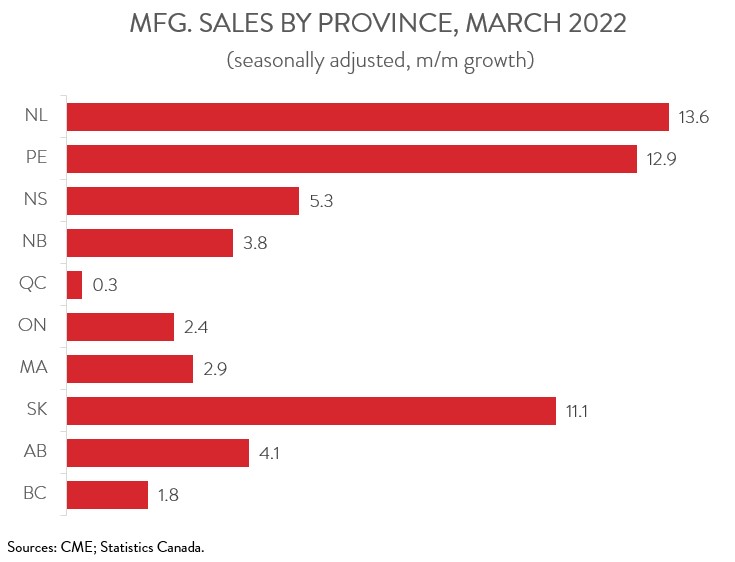 Sales in Ontario rose 2.4% to $30.1 billion in March, building on the 6.6% increase in February. Gains were most pronounced in the petroleum and coal and motor vehicle and parts industries.

In Alberta, sales climbed 4.1% to $8.8 billion in March, the sixth consecutive monthly increase, primarily on higher sales of petroleum and coal products and fabricated metals. The gains were partially offset by lower sales of machinery.

Sales in Saskatchewan increased 11.1% to $2.2 billion in March, mainly on higher sales of chemicals, petroleum and coal products, and primary metals. The gain in the chemical industry was driven by record high sales of pesticide and fertilizers.

Total inventories rose 2.6% to a new record high of $110.9 billion in March, the fifteenth consecutive monthly increase, on higher inventories of primary metals, petroleum and coal products, and food. The gains were driven by higher prices of raw materials, which have been trending upward since January 2021 due to supply chain disruptions and, more recently, the Russian invasion of Ukraine.

With inventories rising at a near identical pace to sales, the inventory-to-sales ratio remain unchanged at 1.58 in March. This ratio represents the number of months it would take to completely clear inventories assuming sales remain at their current level. 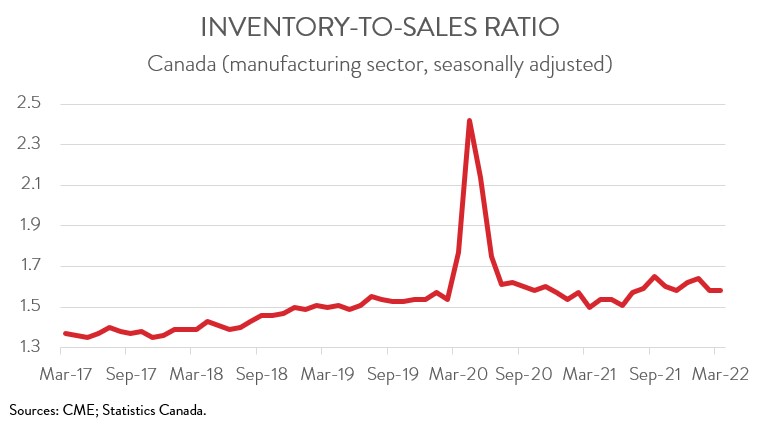 Forward-looking indictors were encouraging. The total value of unfilled orders rose 1.7% to $100.7 billion in March, the highest level since May 2020, as higher unfilled orders in the ship and boat building and computer and electronic products industries more than offset a notable decline in aerospace products and parts.

At the same time, the total value of new orders climbed 1.4% to $71.9 billion, the eighth consecutive monthly increase. The gain was driven mainly by higher new orders in the ship and boat building, computer and electronics product, and petroleum and coal product industries. 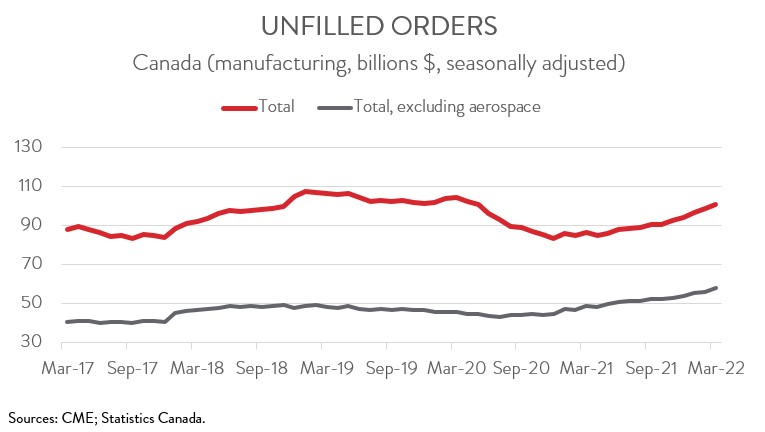 Finally, the manufacturing sector’s capacity utilization rate increased from 76.6% in February to 81.7% in March, the highest rate since May 2019. The gain was propelled by the transportation equipment, food, and paper industries. 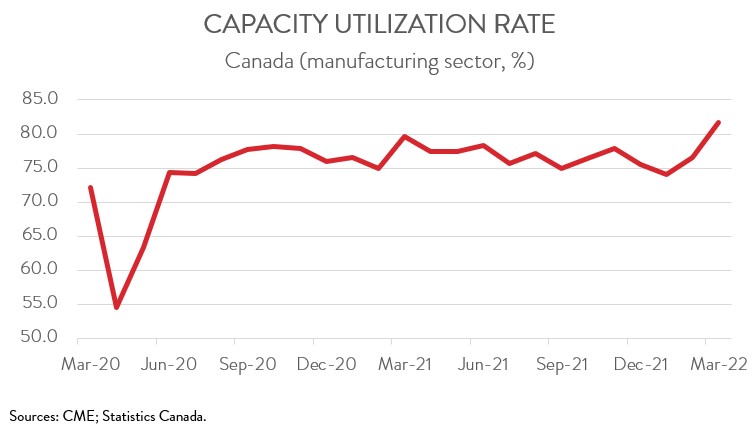