Manufacturing sales increased for the seventh consecutive month in April, up 1.7% to a record high of $72.3 billion. In constant dollar terms, factory sales were up 0.9% on the month, indicating that both prices and volumes sold contributed to the gain. 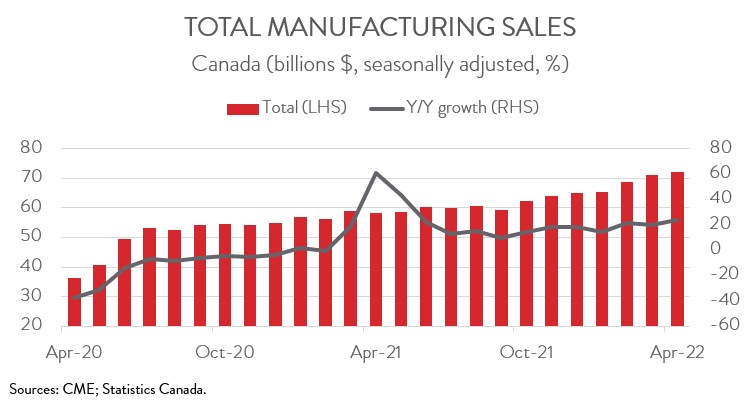 Today’s report provides further evidence that Canada’s manufacturing sector continues to expand despite facing numerous challenges. That said, it will be difficult to sustain the positive momentum given that the global economy is slowing down amid the war in Ukraine, surging inflation, and rising interest rates.

SALES UP IN 9 OF 11 MAJOR INDUSTRIES

The increase in sales spanned 9 of 11 major industries. The motor vehicle and parts industry contributed the most to the growth, with sales rising 6.0% to $7.6 billion in April. This was the sector’s third consecutive monthly increase and the highest level since August 2020. Year-over-year, sales of motor vehicles and parts were up 63.2%. 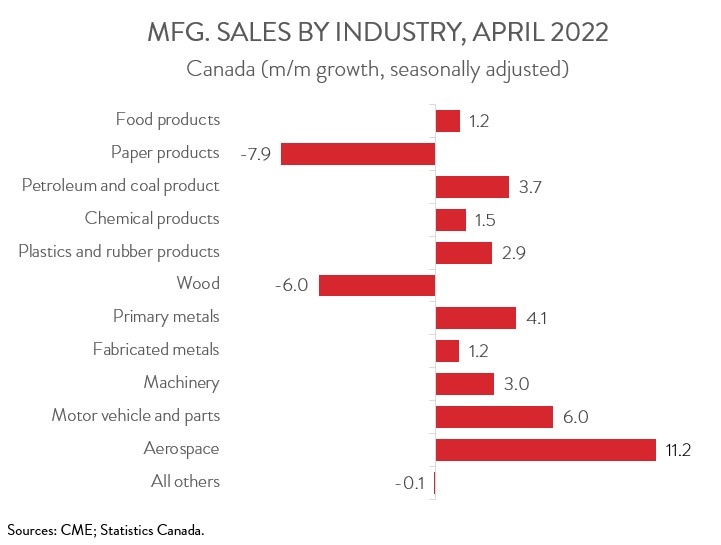 The petroleum and coal products industry continued its hot streak in April, with sales climbing 3.7% to a new record high of $10.1 billion, up for the fourth month in a row. The increase in April was largely due to higher prices, though real sales were also up 0.5%. Disruptions to the supply of energy caused by Russia’s unprovoked invasion of Ukraine fueled a surge in prices of refined petroleum energy products.

Following an 8.6% increase in March, primary metal sales rose 4.1% to $6.2 billion in April, on higher prices and volumes sold. According to Statistics Canada, limited metal production in China stemming from COVID-19 lockdowns and global supply disruptions due to the war in Ukraine lifted prices of basic and semi-finished iron or steel.

On the negative side, wood product sales fell 6.0% to $4.5 billion, the first decline in eight months. The drop in sales was mainly attributable to lower prices, especially for softwood lumber. Wood product sales in constant dollars were also down, albeit by a more moderate 1.3%.

The paper manufacturing industry also suffered a significant decline in April, with sales down 7.9% to $2.5 billion, largely erasing the 10.1% gain made in March. Despite this decrease, year-over-year sales of paper products were up 4.1% in April.

SALES IN ALBERTA INCREASE THE MOST, BOOSTED BY HIGHER PETROLUEM SALES

Regionally, sales were up in seven of ten provinces in April. Alberta made the biggest contribution to the growth, with sales rising 6.5% to $9.5 billion in April. The increase was largely fueled by higher sales of petroleum and coal products and chemicals. On a year-over-year basis, total sales in Alberta were 37.6% higher compared to the same month a year ago.

Quebec was another growth leader, as sales climbed 2.1% to $18.0 billion, the fourth straight monthly advance. The increase was mainly attributable to higher sales in the primary metal and aerospace product and parts industries. 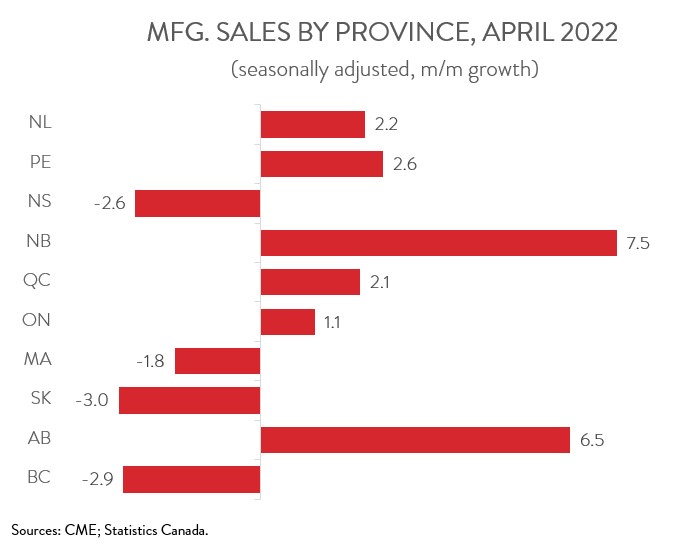 On a negative note, sales in BC declined 2.9% to $5.8 billion in April, weighed down by lower sales in the paper and wood product industries. This was the province’s first drop in sales since August 2021.

Total inventories rose 2.3% to a new record high of $111.8 billion in April, up for the sixteenth month in a row, as higher inventories in the machinery and chemical industries more than offset a notable decline in inventories of motor vehicles.

With inventories slightly outpacing sales, the inventory-to-sales ratio inched up from 1.54 in March to 1.55 in April. This ratio represents the number of months it would take to completely clear inventories assuming sales remain at their current level. 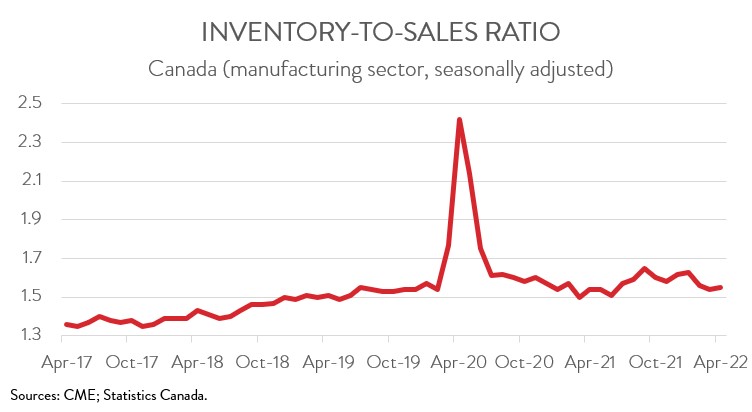 Forward-looking indictors were encouraging. The total value of unfilled orders rose 2.9% to $103.9 billion in April, the sixth consecutive monthly increase and the highest level since March 2020. The gains were mainly attributable to higher unfilled orders in the aerospace product and parts, fabricated metal, and machinery industries.

At the same time, the total value of new orders climbed 3.1% to a record high of $75.2 billion. The increase was led by higher new orders of aerospace product and parts, fabricated metals, and motor vehicles. 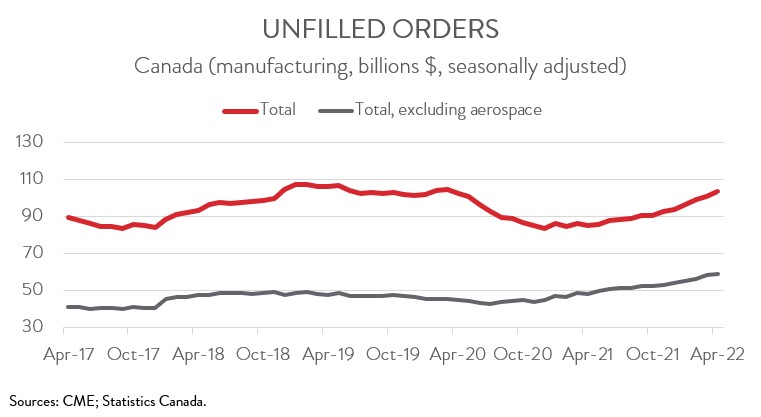 Finally, the manufacturing sector’s capacity utilization rate decreased from 81.9% in March to 79.9% in April on lower production. The transportation equipment, petroleum and coal product, and machinery industries posted the largest declines. 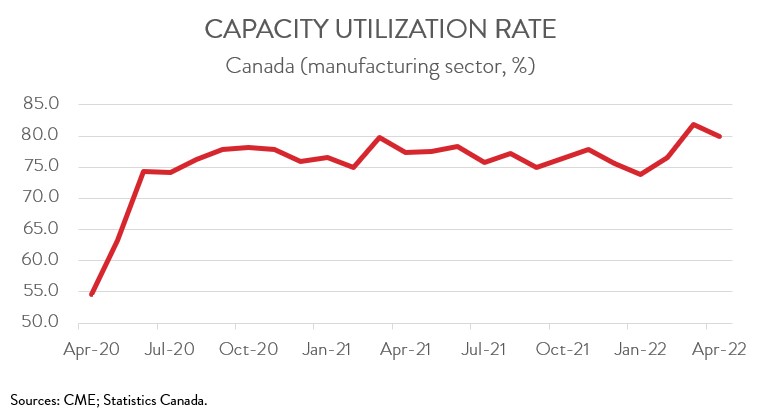