Following seven consecutive monthly increases, manufacturing sales fell 2.0% to $71.6 billion in May. In constant dollar terms, factory sales were down 3.9% on the month, indicating that lower volumes were entirely responsible for the decline in nominal sales. Indeed, prices for manufactured goods remained on their upward trajectory. 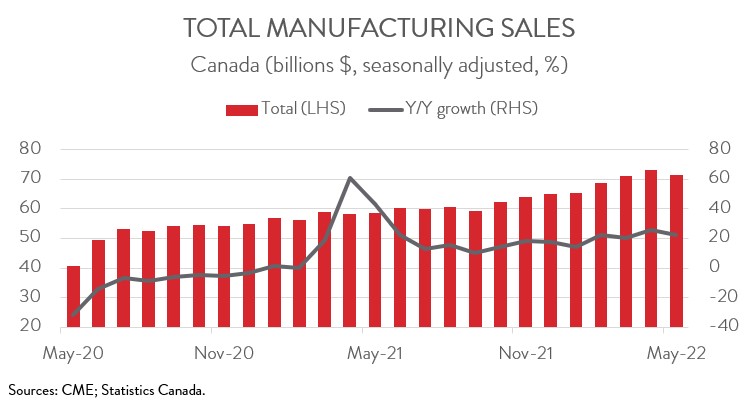 SALES DOWN IN 7 OF 11 MAJOR INDUSTRIES

The decrease in sales spanned 7 of 11 major industries. After increasing for three straight months, sales of motor vehicles and parts crashed 21.1% to $6.3 billion in May. Statistics Canada pinned the blame for the drop on retooling at auto assembly plants and semiconductor shortages. However, despite the decline, sales were up one-third compared to the same month last year. 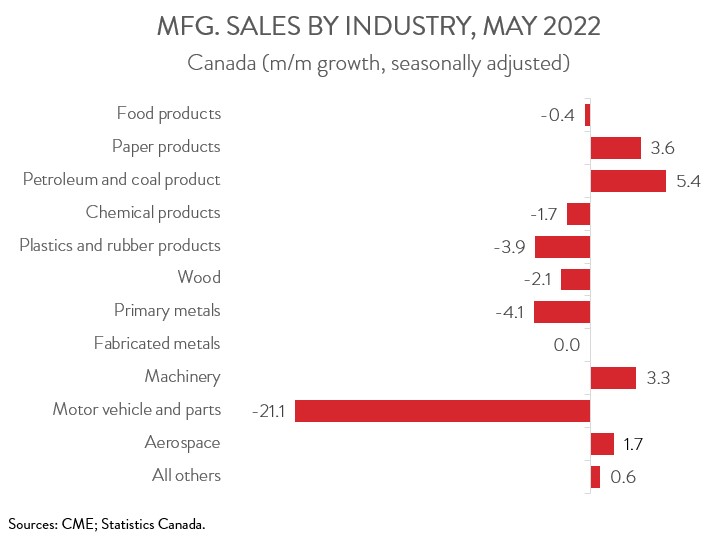 After hitting a record high in April, primary metal sales declined 4.1% to $6.3 billion in May. The decline was entirely due to lower prices, as sales in real terms edged up 0.2%. As noted by Statistics Canada, prices of primary metals continue to be affected by the global supply interruptions caused by Russia’s invasion of Ukraine.

The plastics and rubber products industry also had a tough month, with sales falling 3.9% to $3.5 billion in May. However, this was only the second decline in the past 12 months for this sector. As well, year-over-year sales were up one-quarter.

On the bright side, sales of petroleum and coal products marked a new record high, rising 5.4% to $10.9 billion in May. The increase was attributable to higher prices, as constant dollar sales fell 1.7%. Likewise, machinery sales rose 3.3% to an all-time high of $4.0 billion. Sales were up in all categories except metalworking machinery. The paper manufacturing industry was another positive contributor, with sales up 3.6% to $2.7 billion in May, the fourth increase in five months.

SALES IN ONTARIO WEIGHED DOWN BY DROP IN AUTO PRODUCTION

Regionally, sales were down in five of ten provinces in May. Sales fell the most in Ontario, down 5.3% to $29.9 billion. The decline was driven by lower sales of motor vehicles and parts and plastic and rubber products. However, despite the decline in May, the province’s factory sales were 22.3% higher compared with the same month last year.

Sales in BC decreased 1.4% to $5.8 billion in May, down for the second month in a row. The decline in May was attributable to lower sales in the primary metal, chemical, machinery, and wood product industries. Year-over-year, sales in BC were up 3.8%. 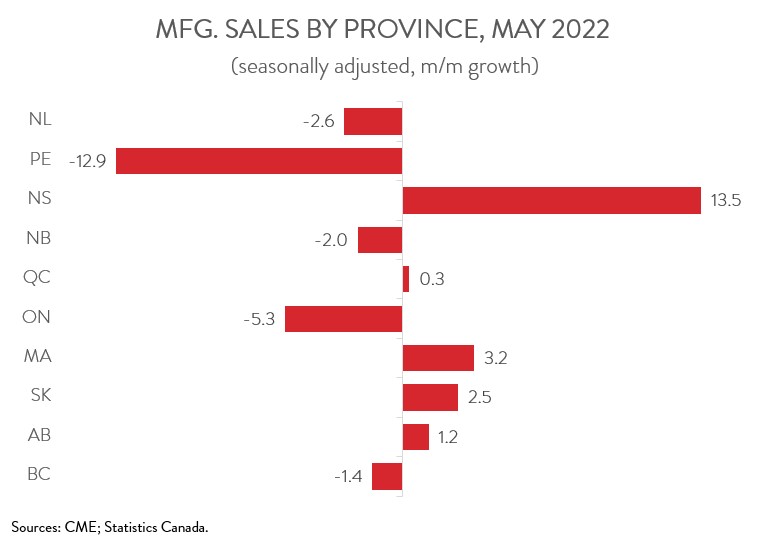 On the positive side of the ledger, Nova Scotia posted the largest increase in May, as sales rose 13.5% to reach $1.0 billion for the first time. The increase was largely due to higher sales of seafood, as sales of lobster hit a record high.

Sales in Alberta climbed 1.2% to $9.5 billion in May, the eighth consecutive monthly gain. The increase in May was fueled by higher sales of petroleum and coal products, fabricated metal products, and transportation equipment. On a year-over-year basis, factory sales in Alberta were up 31.8%.

Accordingly, the inventory-to-sales ratio increased from 1.54 in April to 1.59 in May. This ratio represents the number of months it would take to completely clear inventories assuming sales remain at their current level. 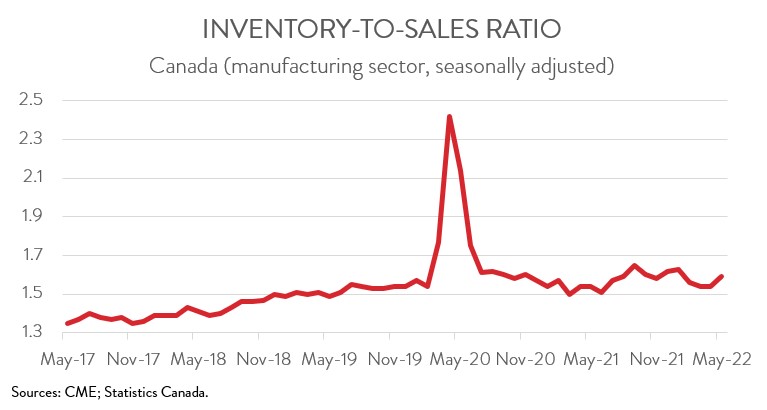 Forward-looking indictors were discouraging. The total value of unfilled orders fell 0.8% to $103.0 billion in May, ending a streak of six consecutive monthly gains. The decrease was mainly attributable to lower unfilled orders in the aerospace product and parts industry.

At the same time, the total value of new orders plunged 7.1% to $70.8 billion, the largest monthly decline since February 2021. The decrease was driven by lower new orders of aerospace product and parts, motor vehicles, and chemical products. 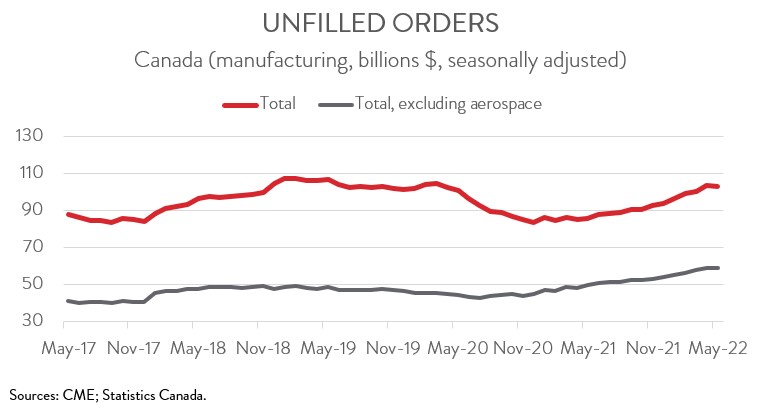 Finally, the manufacturing sector’s capacity utilization rate decreased from 79.1% in April to 78.0% in May on lower production, down for the second month in a row. The transportation equipment and food industries experienced some of the largest percentage declines. 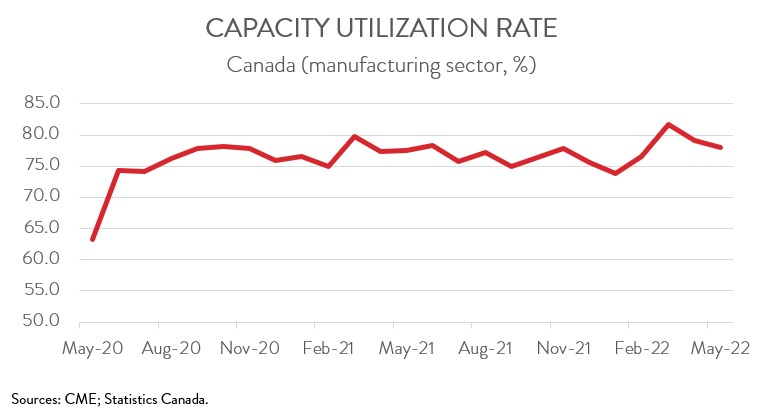