Manufacturing sales fell 0.8% to $71.8 billion in June, the second consecutive monthly decline following seven straight months of increases. In constant dollar terms, factory sales edged up 0.1% on the month, indicating that lower prices were entirely responsible for the decline in nominal sales. 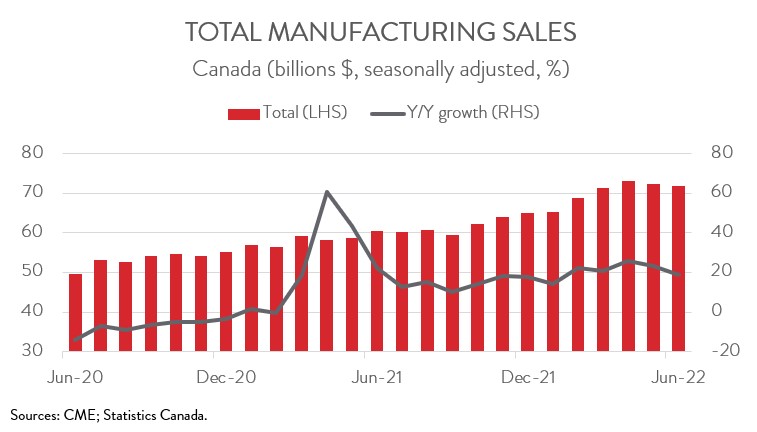 Although factory sales rose 5.8% in the second quarter—the eighth consecutive quarterly increase—the back-to-back monthly declines signal that the manufacturing sector was losing momentum entering Q3. This slowdown should not be a surprise given the magnitude of the headwinds facing the sector, including high raw material costs, supply chain disruptions, labour and skills shortages, and a gloomier and more uncertain global economic outlook.

SALES DOWN IN 6 OF 11 MAJOR INDUSTRIES

Sales were down in 6 of 11 major industries. Sales in the petroleum and coal product industry fell 7.8% to $10.7 billion in June, the first decline in six months. Demand for energy products cooled in June, as concerns over a global economic slowdown mounted. 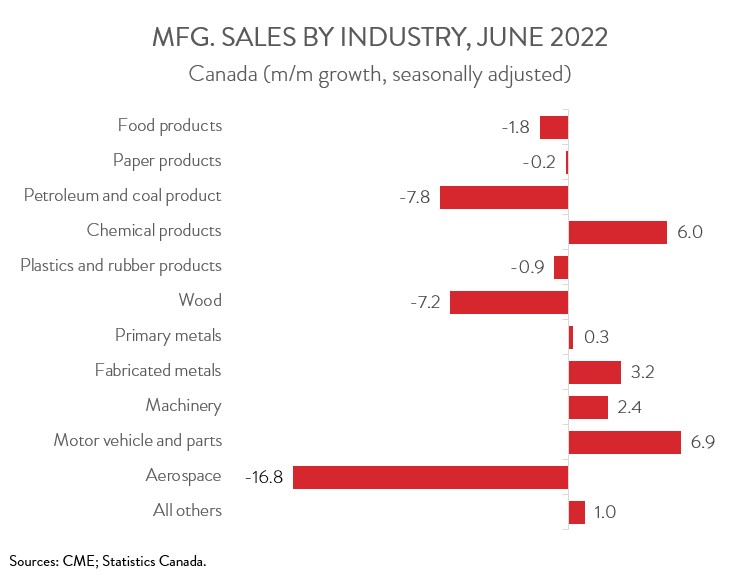 Sales of aerospace product and parts dropped 16.8% to $1.3 billion in June, the largest monthly decline since February 2021. As a result, sales were 45% below their pre-pandemic levels in June, indicating that a full recovery is a long way off for the country’s aerospace sector.

On the positive side, sales in the motor vehicle and parts industry increased 6.9% to $6.6 billion in June, partially making up for the 21.7% decline in May. According to Statistics Canada, most motor vehicle assembly plants in Ontario were able to boost production in June despite the ongoing global semiconductor shortage.

SALES DECLINE WIDESPREAD ACROSS MOST PROVINCES

Regionally, sales were down in eight of ten provinces in June. New Brunswick saw the steepest losses, with sales decreasing 9.6% to $2.2 billion, primarily on lower sales of non-durable goods. This was the province’s first decline since October 2021.

Sales in Quebec dipped 1.0% to $18.0 billion in June, mainly attributable to lower sales of aerospace product and parts, petroleum and coal products, and beverage and tobacco products. Despite the decline, sales were up 14.3% on a year-over-year basis.

Following eight consecutive monthly increases, sales in Alberta fell 1.8% to $9.3 billion in June. The decline was largely driven by lower sales of petroleum and coal products and wood products. 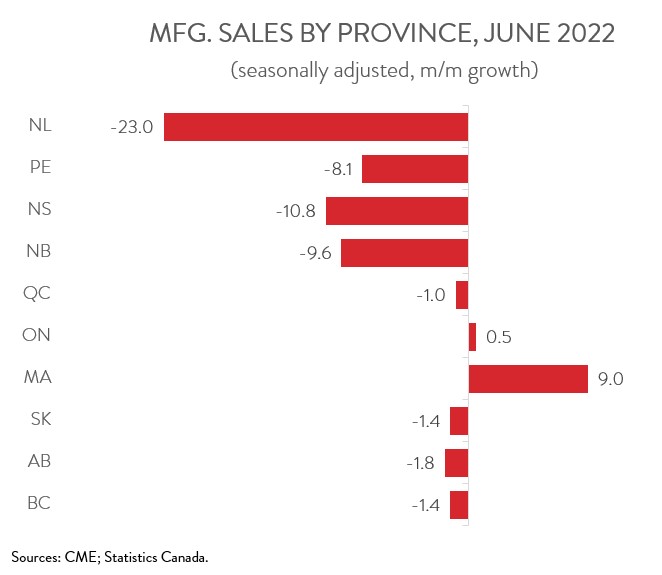 On a happier note, sales in Manitoba rose 9.0% to a record high of $2.2 billion in June. The increase was mainly due to higher sales of chemicals and transportation equipment.

At the same time, sales in Ontario climbed 0.5% to $30.8 billion in June, largely attributable to higher sales of motor vehicles and non-metallic minerals. On a quarterly basis, factory sales in Ontario were up 5.9% in the second quarter.

Total inventories continued their relentless upward march, increasing 2.1% to a new record high of $116.4 billion in June, up for the 18th month in a row. The increase was largely driven by higher inventories in the machinery, transportation equipment, and chemical industries. Raw materials, accounting for the largest component of inventories, have increased for twenty consecutive months due to higher prices.

Accordingly, the inventory-to-sales ratio increased from 1.57 in May to 1.62 in June. This ratio represents the number of months it would take to completely clear inventories assuming sales remain at their current level. 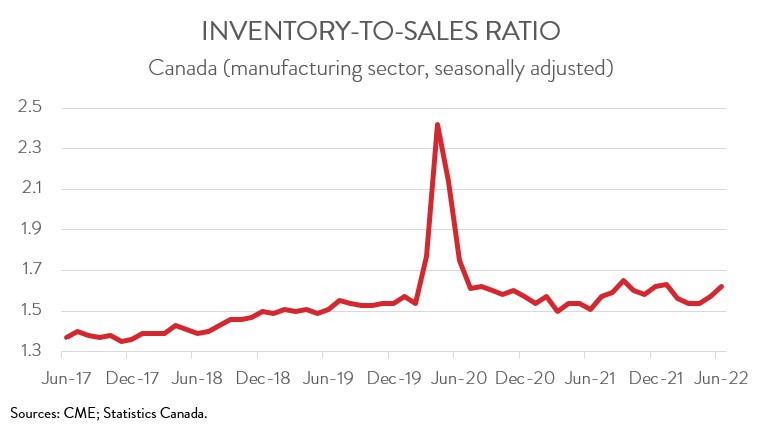 Forward-looking indictors were encouraging. The total value of unfilled orders rose 1.7% to $105.0 billion in June. The increase was largely driven by higher unfilled orders in the motor vehicle, aerospace product and parts, and computer and electronic product industries.

At the same time, the total value of new orders climbed 2.7% to $73.6 billion. The increase was mainly due to higher new orders of aerospace product and parts, motor vehicles, and chemicals. 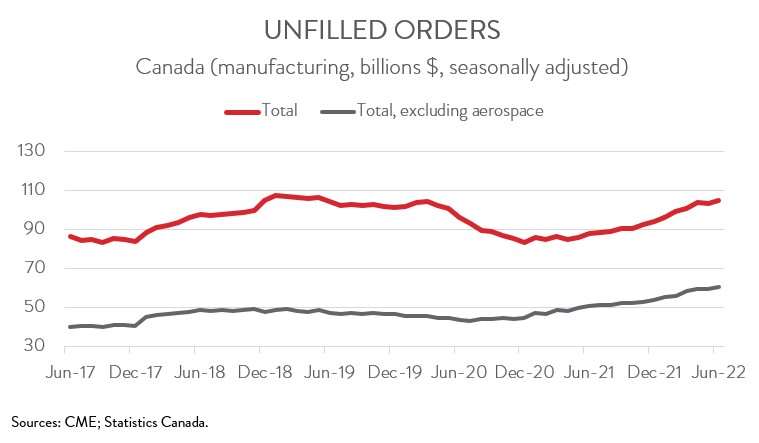 Finally, the manufacturing sector’s capacity utilization rate increased from 78.8% in May to 79.3% in June, up for the first time in three months. The transportation equipment, computer and electronic product, and fabricated metal industries experienced some of the largest percentage gains. 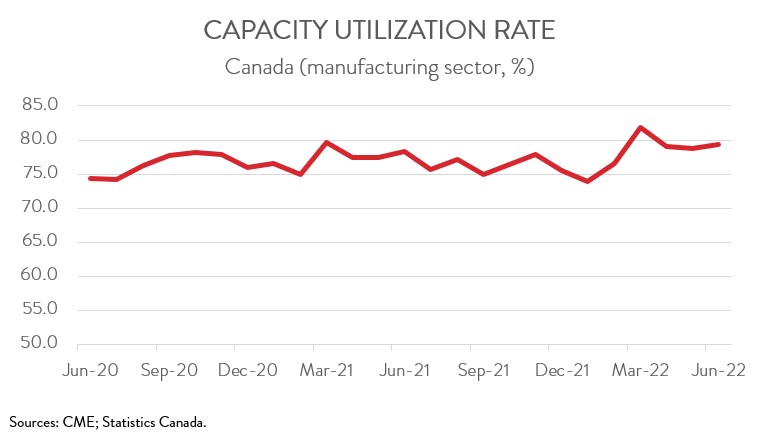