MANUFACTURING SALES UP 2.8% IN OCTOBER

Manufacturing sales rose 2.8% to $72.6 billion in October, the first solid increase in six months. Sales in constant dollars were unchanged, indicating that the entire increase in current dollar sales was driven by higher prices. 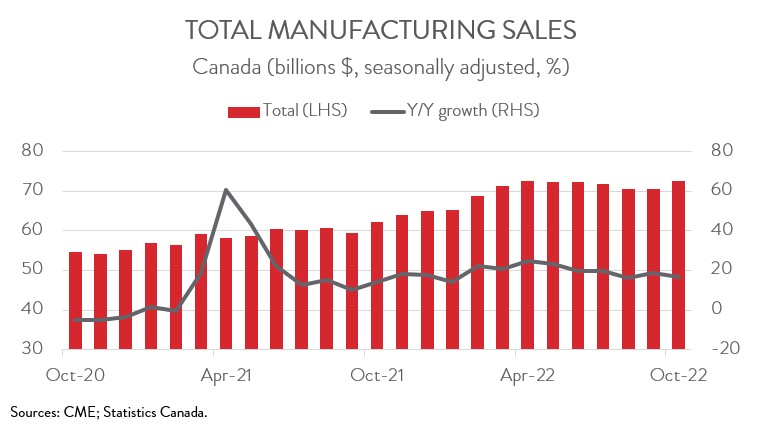 While today’s report featured a strong headline number, it masked underlying softness. With constant dollar sales flat on the month, it continued a string of weak readings for this key indicator. In fact, real sales have declined by 2.4% since May 2022, suggesting that Canada’s manufacturing sector is feeling the pinch of slowing economic growth both at home and globally. This is on top of existing problems the industry is already facing, including labour shortages, disrupted supply chains, and high production costs.

Sales increased in 6 of 11 major industries in October. After four consecutive monthly declines, sales in the petroleum and coal product industry jumped 12.7% to $10.6 billion in October. The growth was largely due to higher prices, though volumes were up somewhat too.

Food sales climbed 2.9% to an all-time high of $12.3 billion in October. The gains were predominately driven by the grain and oilseed milling industry, a sector that has seen prices and global demand for their products soar since Russia invaded Ukraine. 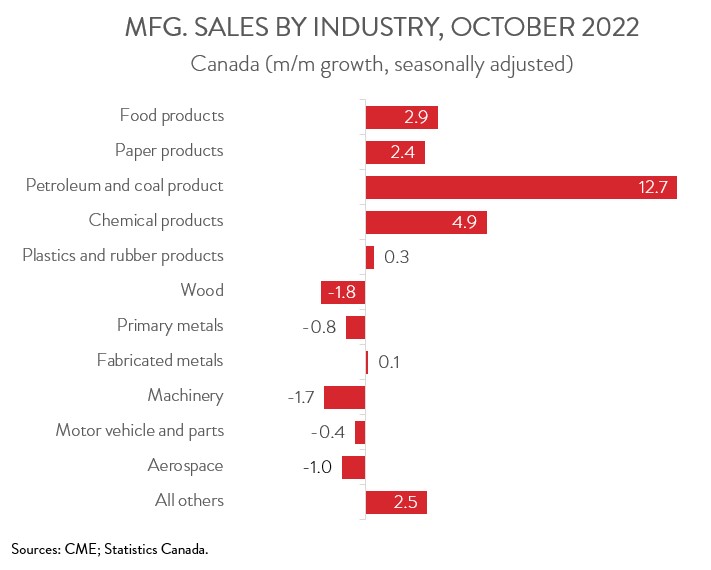 Factory sales in the chemical industry were up for the second straight month, rising 4.9% to $6.1 billion in October. The gain was mainly attributable to the pesticide, fertilizer and other agricultural industry, coinciding with strong seasonal demand and worldwide supply shortages due to sanctions aimed at Russia and Belarus.

On the negative side, sales of machinery fell 1.7% to $4.2 billion in October, down for the third time in four months. At the same time, sales of wood products decreased 1.8% to $3.6 billion, the seventh consecutive monthly decline, attributable to rising interest rates and slower North American housing market activity. Finally, sales of motor vehicles and parts edged down 0.4% to $6.6 billion in October, as a lack of materials and semiconductor shortages continue to plague several auto manufacturers. 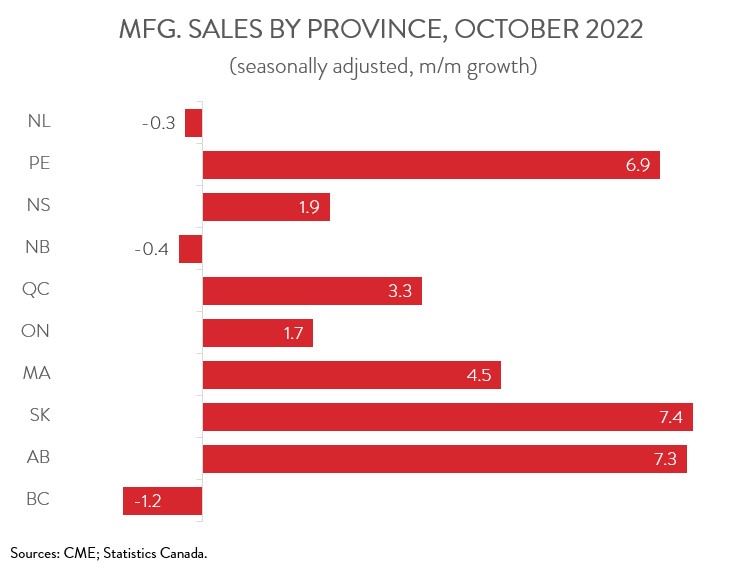 On the flipside, sales in BC fell 1.2% to $5.7 billion in October, down for the sixth time in seven months and mainly driven by the primary metal industry. New Brunswick and Newfoundland and Labrador also saw factory sales shrink in October, though the declines were relatively modest at 0.4% and 0.3%, respectively.

Total inventories climbed to yet another record high, increasing 0.3% to $122.2 billion in October, the 22nd consecutive monthly increase. But with sales rising at an even faster pace, the inventory-to-sales ratio decreased from 1.73 in September to 1.68 in October, down for the first time in seven months. This ratio represents the number of months it would take to completely clear inventories assuming sales remain at their current level. 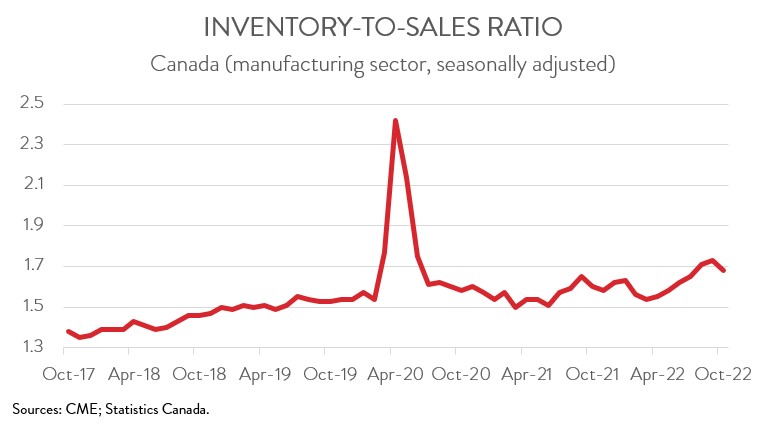 Finally, the manufacturing sector’s capacity utilization rate edged down from 77.6% in September to 77.2% in October. The primary metal, computer and electronic, and transportation equipment sectors experienced the most significant declines, while the petroleum and coal product and chemical industries posted the most notable increases.