Manufacturing sales fell for the fourth straight month in December, down by 0.7 per cent to $56.4 billion. To make matter worse, November sales were revised downward to a 1.0 per cent decline (originally reported as a 0.6 per cent fall). In real terms, manufacturing sales declined by 0.4 per cent in December. 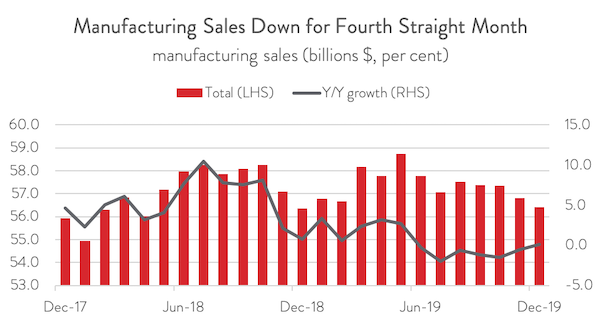 Manufacturing sales increased by 0.5 per cent to $688.5 billion in 2019, the fourth consecutive annual increase. However, the pace of growth was much slower than in 2017 and 2018. Moreover, despite the gain in 2019, the manufacturing sector lost momentum as the year progressed, recording declines in 6 of the final 7 months. Although the industry continues to be derailed by transitory factors like the CN rail strike, a pipeline leakage, the GM plant closure, and now the coronavirus outbreak and rail blockades, the underlying weak trend should raise red flags for policymakers concerned about the global competitiveness of the Canadian manufacturing sector.

Five of 11 major industries posted declines in December, led by a steep 15.7 per cent drop in the volatile aerospace industry. Declines were also recorded in plastics and rubber products, motor vehicle and parts, fabricated metals, and paper products. According to Statistics Canada, the decline in motor vehicle and parts was attributable to seasonal shutdowns and, to a lesser extent, the closure of the GM Assembly Plant in Oshawa.

Primary metals posted the biggest gain in December at 8.7 per cent, partly recouping the 11.8 per cent decline in the previous month. Other industries that recorded increases included wood products, petroleum and coal refining, chemical products, machinery, and food products. 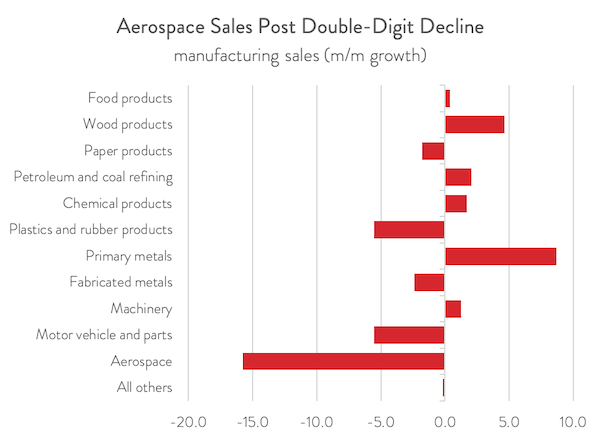 The decline in sales were concentrated in four provinces. Saskatchewan posted the biggest drop at 7.8 per cent, followed by PEI at 5.6 per cent. Quebec saw sales fall 2.2 per cent, while Ontario experienced a drop of 1.1 per cent. The declines in Quebec and Ontario were largely attributable to lower sales in the transportation equipment industry. Ontario sales were also weighed down by a sales drop in plastics and rubber products.

Sales gainers included Nova Scotia (7.3 per cent), Manitoba (4.1 per cent), Newfoundland and Labrador (3.6 per cent), British Columbia (3.3 per cent), and New Brunswick (0.9 per cent). Sales in Alberta were largely flat, edging up by just 0.1 per cent. BC’s increase was its first in three months, and came thanks to higher sales in primary metals, wood products, petroleum and coal refining, and transportation equipment. 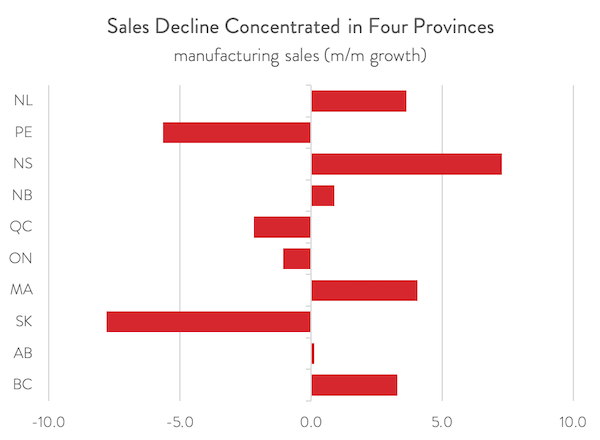 In more bad news, forward-looking indicators were also weak in December, providing scant hope that demand will pick up in the near-term. Unfilled orders fell by 0.1 per cent $97.6 billion in December, while new orders dipped 0.6 per cent to $56.4 billion. Moreover, the inventory-to-sales ratio increased for the third straight month, rising from 1.54 in November to 1.55 in December. A rising inventory-to-sales ratio is a bearish signal that manufacturers may be forced to cut back production until inventories are sufficiently depleted. 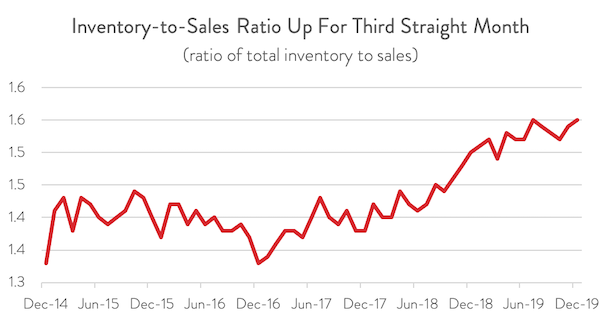 Finally, the manufacturing sector’s capacity utilization rate (the ratio of actual output to estimated potential output) fell steeply from 80.0 per cent in November to 76.3 per cent in December. On the one hand, as noted by Statistics Canada, this figure is not seasonally adjusted, so the decline could partly reflect regular seasonal variations. On the other hand, the capacity utilization rate was 1.5 percentage points lower than in December 2018 and 5.7 percentage points lower than in December 2017. This growing unused capacity is a clear headwind to investment. 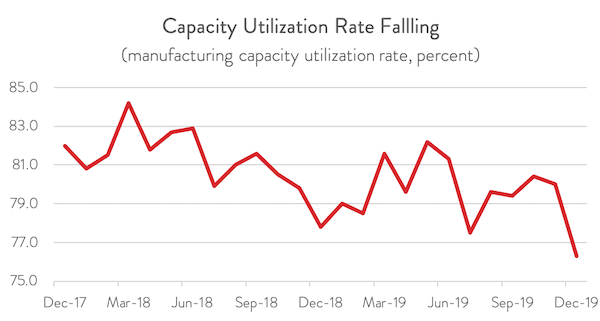