Factory sales were flat at $72.3 billion in November, following a 2.4% increase in October. In real terms, the picture was somewhat more upbeat, with sales in constant dollars edging up 0.1%. 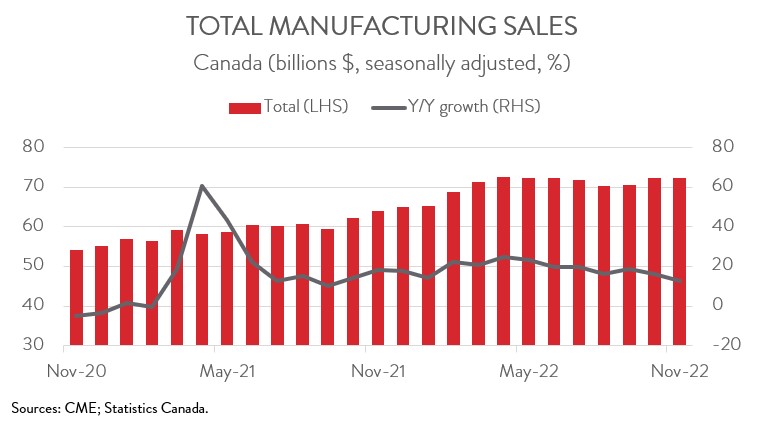 Today’s report was another sign that activity in Canada’s manufacturing sector is cooling, corresponding with slowing economic growth both at home and globally. Even though constant dollar sales were up in two of the last three months, they have still decreased by a total of 2.2% since May 2022. Unfortunately, a full recovery from the COVID-19 pandemic remains elusive, as sales volumes in November were 0.7% below their levels of February 2020.

Sales increased in 5 of 11 major industries. Sales in the motor vehicle and parts industry rose 6.7% to $7.1 billion in November, the first increase in four months and the highest level since April 2022. Statistics Canada attributed the gain to an increase in production at several assembly plants, although supply shortages remain a constraint.

Fabricated metal product sales increased for the third month in a row in November, up 2.7% to an all-time high of $4.5 billion. The gains were widespread across most subsectors, with architectural and structural metals leading the way. 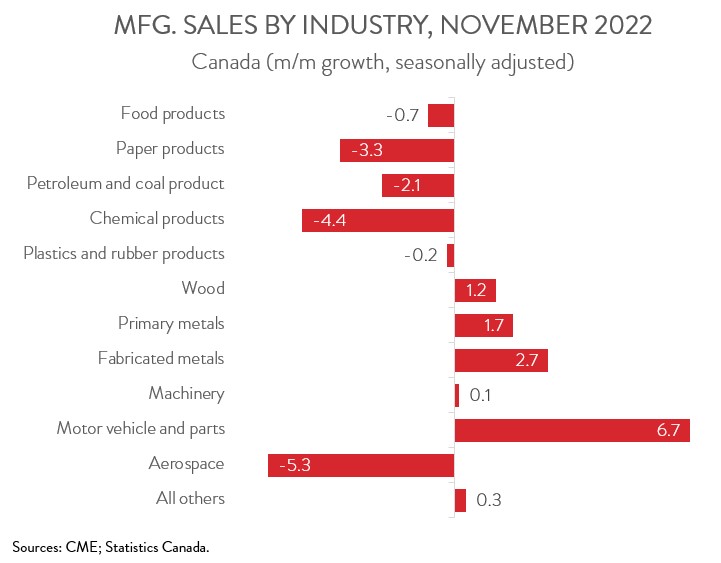 In addition, sales in the primary metal industry climbed 1.7% to $5.7 billion in November, driven by higher sales of alumina and aluminum production and processing and non-ferrous metal (except aluminum) production and processing. Prices for non-ferrous metals jumped in November, coinciding with geopolitical uncertainties such as a potential ban on Russian metals and China’s abrupt abandonment of its zero-COVID policy.

On the downside, chemical sales fell 4.4% to $5.8 billion in November, down for the first time in three months. The decline was largely due to a big drop in sales of pesticides, fertilizers, and other agricultural chemicals, with higher sales of pharmaceuticals and medicines acting as a partial offset.

SALES IN ONTARIO INCREASE THE MOST

Regionally, sales were up in seven of ten provinces in November. Sales in Ontario increased the most, up 0.7% to $31.2 billion, driven largely by higher sales in the motor vehicle industry. In Quebec, sales rose 0.4% to $18.2 billion in November, the third consecutive monthly advance. Statistics Canada attributed the gain to higher sales in the primary metal industry, as production ramped up at several non-ferrous metal plants. 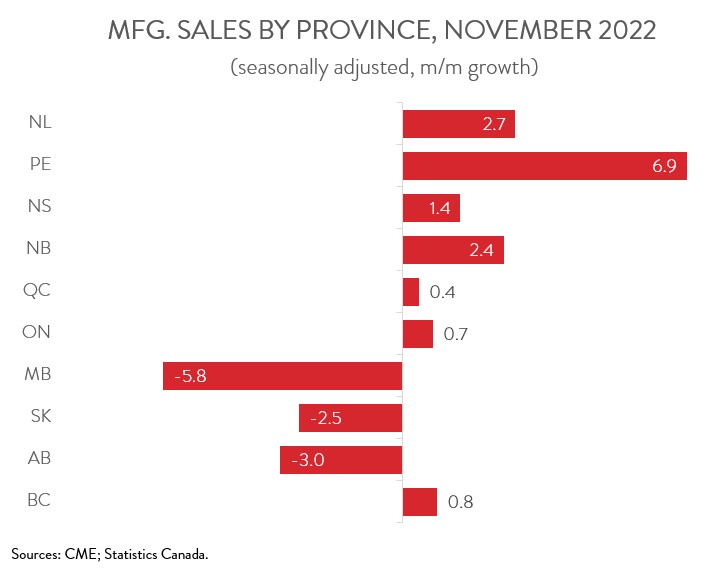 On the negative side, sales in Alberta fell 3.0% to $9.2 billion in November, down for the first time in three months, with the decline concentrated in the chemical and petroleum and coal product industries. Following three consecutive monthly gains, sales in Manitoba decreased 5.8% to $2.1 billion in November, as lower sales in the chemical industry more than offset higher sales in the plastic and rubber products sector.

Total inventories declined 0.5% to $121.6 billion in November, the first monthly decrease since December 2020. With sales coming in flat, the inventory-to-sales ratio ticked down from 1.69 in October to 1.68 in November, the second consecutive monthly decline. This ratio represents the number of months it would take to completely clear inventories assuming sales remain at their current level. 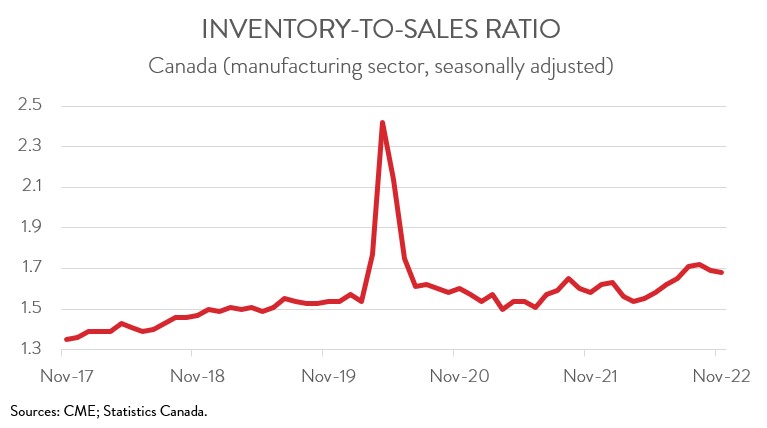 Forward-looking indictors were soft. The total value of unfilled orders fell for the second consecutive month, down 0.8% to $109.6 billion in November. The decrease was broad-based, led by the aerospace product and parts and plastic and rubber products industries.

At the same time, the total value of new orders declined 0.3% to $71.4 billion, also down for the second month in a row. Lower new orders in the aerospace product and parts, chemical, and fabricated metal product industries more than offset higher new orders in the motor vehicle, computer and electronics, and primary metal sectors. 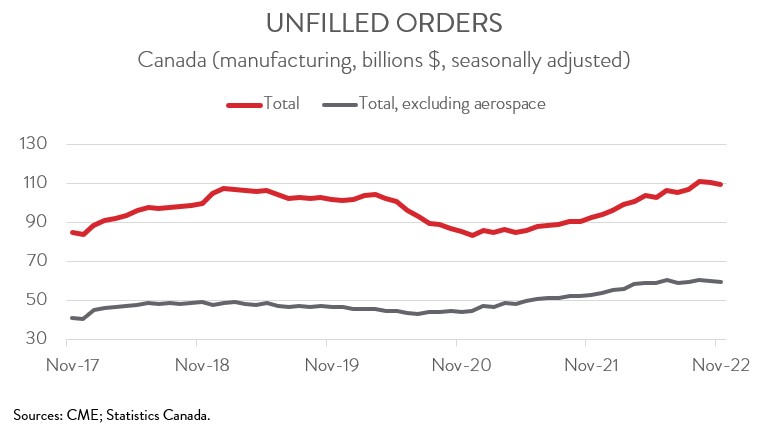 Finally, the manufacturing sector’s capacity utilization rate increased from 77.9% in October to 78.6% in November. The transportation equipment, primary metal, and fabricated metal product industries recorded the most significant increases, while the food and petroleum and coal product sectors experienced the most notable declines. 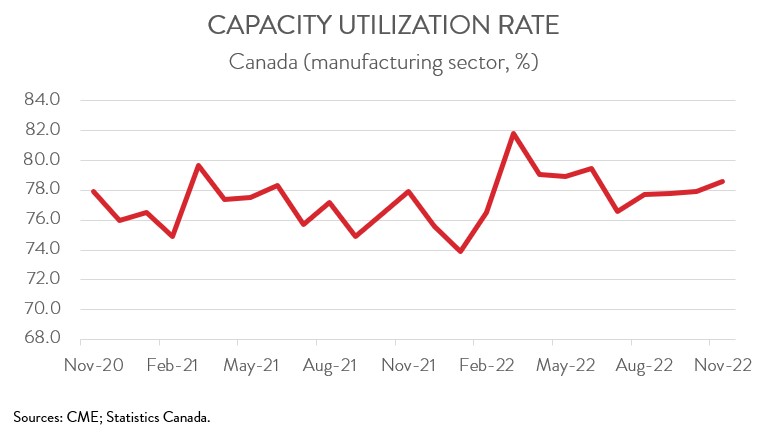