Manufacturing Activity Already Slumping Prior to Rail Blockades and Coronavirus

Manufacturing sales fell for the fifth straight month in January, down by 0.2 per cent to $56.1 billion. With this decline, sales dropped to their lowest level since April 2018. Adjusted for inflation, manufacturing sales declined by an even steeper 0.4 per cent. 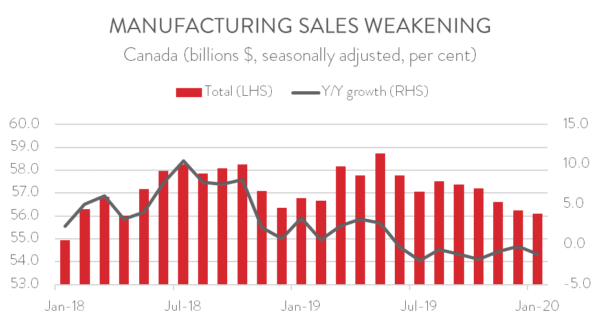 The January manufacturing sales report shows that Canadian factories were already struggling prior to the severe negative headwinds of the rail blockades and COVID-19 outbreak. With the economic impact of the outbreak continuing to mount, government action is needed to support manufacturers in this trying time. Canadian Manufacturers & Exporters is working closely with all levels of government on the response to this ongoing crisis.

Six of 11 major industries recorded declines in January, with the biggest losses occurring in motor vehicle and parts (-7.6 per cent) and petroleum and coal refining (-5.2 per cent). As noted by Statistics Canada, motor vehicle and parts sales were weighed down by temporary shutdowns at some assembly plants and the December 2019 closure of GM’s plant in Oshawa. Meanwhile, partial shutdowns at some refineries for maintenance work, along with lower prices, fueled the decline in petroleum and coal refining sales. These losses were partly offset by solid gains in in fabricated metals (4.6 per cent, machinery (4.6 per cent), food products (2.6 per cent), and aerospace (2.4 per cent). 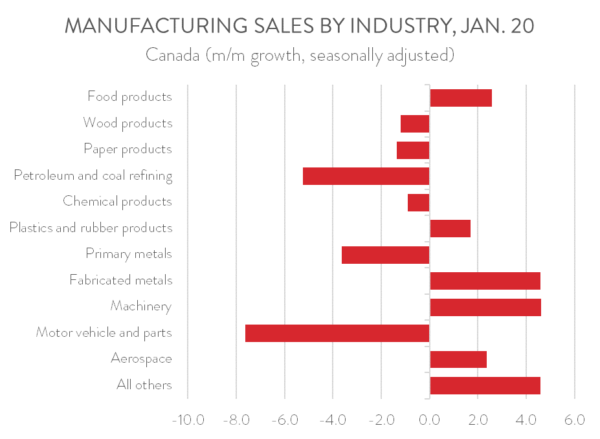 Six provinces saw sales fall in January. Double digit declines were recorded in both Newfoundland and Labrador (-13.5 per cent) and in New Brunswick (-11.4 per cent), with more moderate drops posted in Nova Scotia (-5.6 per cent), BC (-5.1 per cent), Manitoba (-3.4 per cent), and Ontario (-1.4 per cent). The decline in Ontario was largely attributable to lower sales of motor vehicle and parts.

Sales rose in PEI (5.5 per cent), Alberta (5.2 per cent), Quebec (3.5 per cent), and Saskatchewan (1.8 per cent). Quebec posted its first increase in three months, thanks to higher sales in transportation equipment, machinery, and fabricated metal products. Likewise, Alberta saw its sales rise for the first time in three months, with food products and machinery helping spark the recovery. 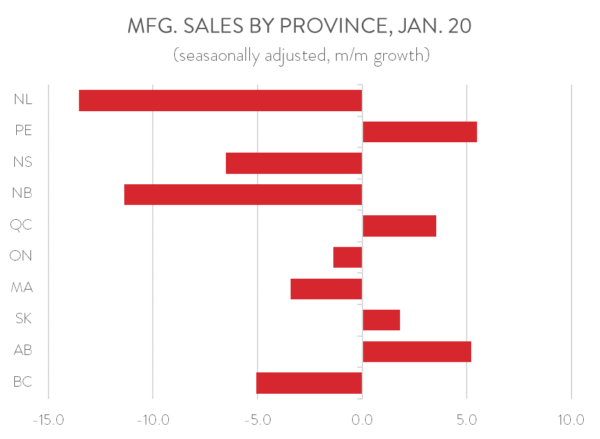 On a positive note, unfilled orders rose for the first time in four months in January, up 0.5 per cent to $97.9 billion. The increase was largely attributable to gains in the transportation equipment sector and in the chemical industry. Indeed, excluding aerospace, sales were down 0.8 per cent on the month.

New orders also increased in January, up by 0.8 per cent to $56.6 billion. According to Statistics Canada, the gains were led by transportation equipment, fabricated metal, food products, and non-metallic mineral products. 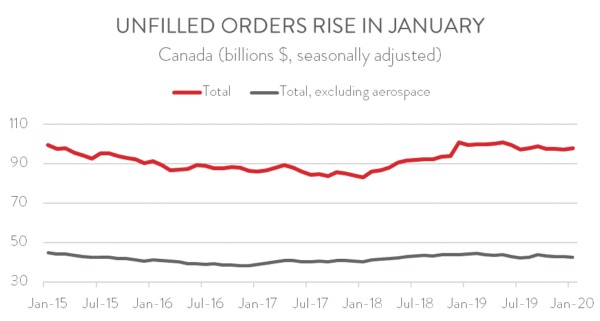 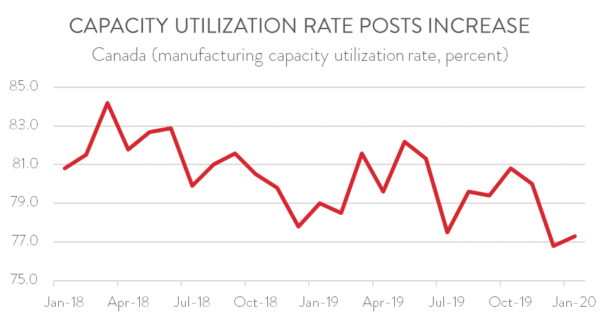