The COVID-19 outbreak had a significant impact on manufacturing sales in March, as several plants shut down or substantially reduced production. Sales plunged 9.2 per cent to $50.8 billion in March, the lowest level since June 2016 and the largest percentage decline since December 2008. Adjusted for inflation, the picture was just as dreary, with shipment volumes down 8.3 per cent. 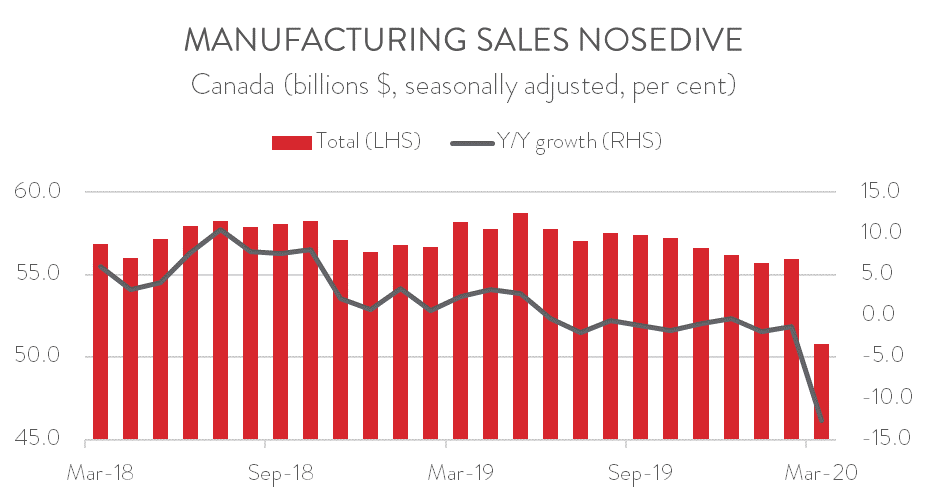 As bad as the March figures were, the worst is yet to come. With containment measures in place for the entire month of April, we are guaranteed to see an even steeper fall in shipments when the April data are released in about four weeks. Accordingly, CME continues to work closely with all levels of government to ensure the industry’s concerns are being addressed as part of the ongoing response to the COVID-19 pandemic.

FOOD AND PAPER ONLY INDUSTRIES TO SEE SALES INCREASE

Sales rose in just two of 11 major industries in March—food (8.2 per cent) and paper (8.4 per cent)—as shoppers flocked to stores to stock up on groceries and toilet paper. On the other hand, motor vehicle and parts sales crashed by 31.9 per cent, as the auto industry halted production in the middle of the month to implement enhanced protections for workers. The shutdown was extended to about mid-May, owing to continued health and safety concerns, growing supply chain disruptions, and depressed vehicle sales. But with auto plants slowly gearing up to restart production, April will likely be the bottom for the industry.

At the same time, sales in the petroleum and coal refining industry plunged 32.2 per cent in March, as refineries curbed production in response to collapsing demand for gasoline and jet fuel. Industry sales will remain low until demand for these products pick up. Notable declines were also recorded in plastics and rubber products (-10.9 per cent), primary metal (-7.4 per cent), fabricated metal (-4.9 per cent), and aerospace (-4.8 per cent). 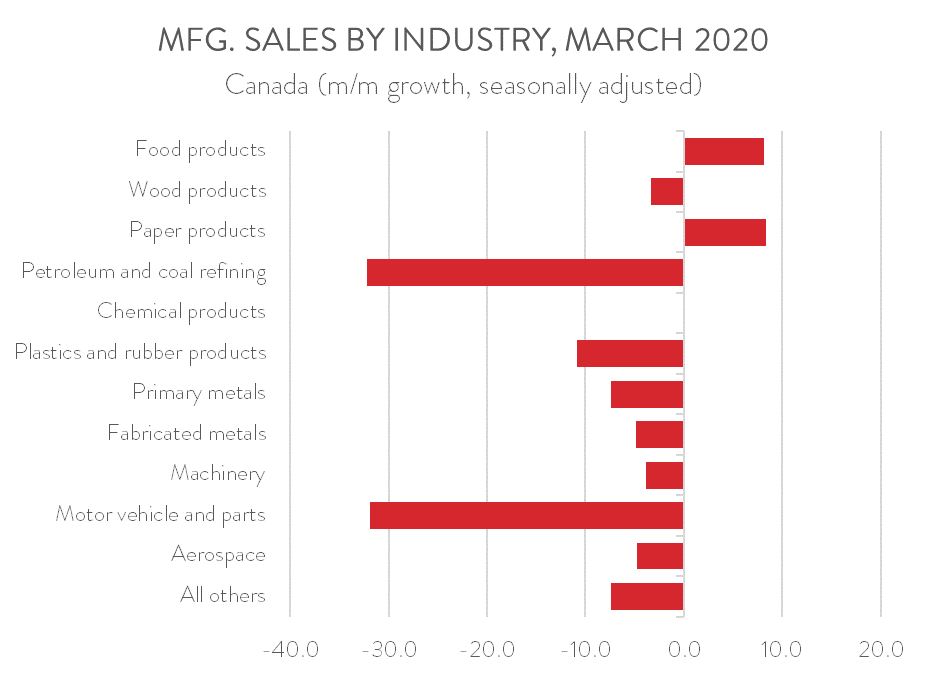 MANITOBA AND NOVA SCOTIA ONLY PROVINCES TO SEE SALES INCREASE

Manitoba and Nova Scotia were the only provinces to buck the national trend and record a sales gain in March. In fact, sales in Manitoba rose an impressive 8.2 per cent, thanks largely to higher sales of food. Nova Scotia sales climbed 2.9 per cent, largely attributable to higher sales in the transportation equipment and paper industries. Meanwhile, sales in BC fell a relatively modest 0.6 per cent.

At the other end of the spectrum, Ontario sales plunged by $3.7 billion in March, accounting for nearly three-quarters of the $5.1 billion national decline. The drop in sales was led by the motor vehicle and parts and petroleum and coal product refining industries. Double-digit declines were also recorded in New Brunswick (-24 per cent) and Newfoundland and Labrador (-19.4 per cent). Finally, sales in Quebec fell for the second consecutive month, down 4.1 per cent to $13.1 billion. 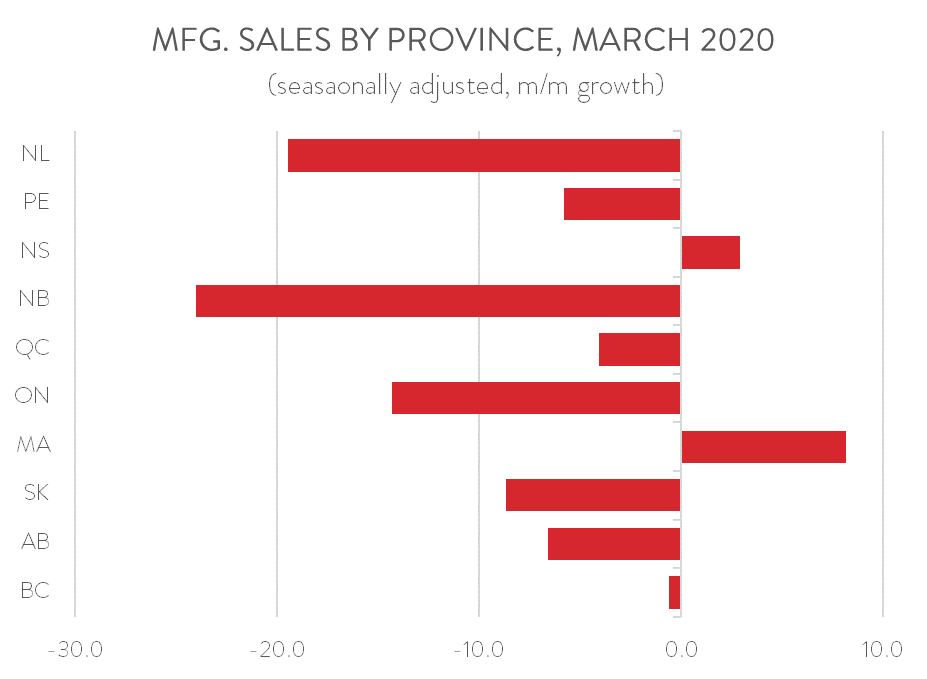 Forward-looking indicators were also discouraging. New orders fell 11.3 per cent to $50.4 billion, while unfilled orders decreased 0.4 per cent to $96.8 billion. Declines were particularly steep in the transportation equipment industry. 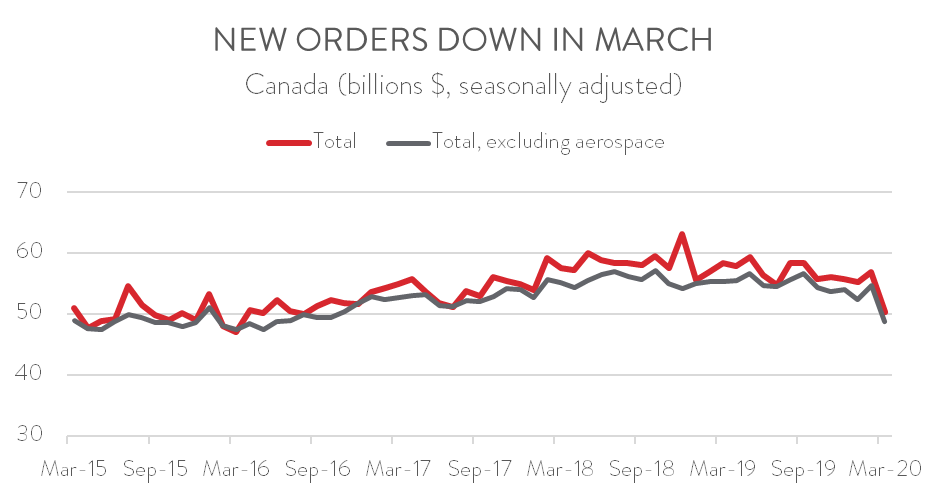 Inventories climbed a modest 0.1 per cent to $87.5 billion in March. Combined with the dramatic drop in sales, this pushed up the inventory-to-sales ratio to a record of 1.72. At the same time, the sector’s capacity utilization rate declined 3.6 percentage points to 72.8 per cent. This is 8.8 percentage points lower than the same month a year ago. 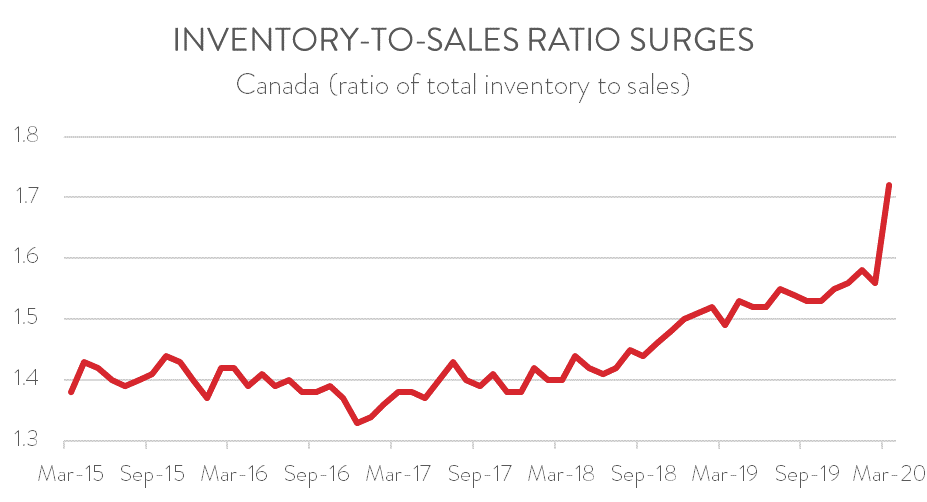