After three consecutive months of record output levels, Canadian manufacturing activity dipped slightly in August, driven lower by a drop in motor vehicles production. Even with the decline, however, monthly sales remain at their second highest level on record.

Overall manufacturing production fell by 0.4 per cent in August, bringing the value of total output down to $58.6 billion from an all-time high of $58.8 billion the previous month. The good news is that July’s record output levels were revised upward from $56.6 billion, meaning that early estimates of manufacturing activity in August were about the same as they initially were in July. 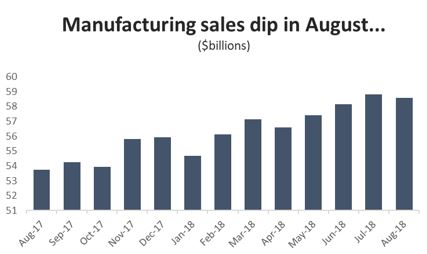 Despite the decline in sales in August, year-over-year growth rates remain strong – at least in part because of a summertime slump in manufacturing output at this same time last year. Sales in August were 9.0 per cent higher than they were 12 months earlier and through eight months, year-to-date sales are tracking 6.0 per cent higher than they were through the first eight months of 2017. 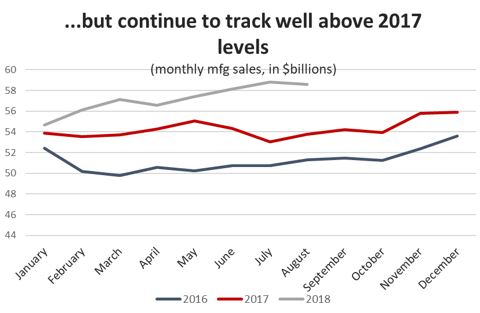 For the most part, the lower sales figures in August were the result of a decline in output volumes rather than price effects. The auto sector and primary metals industries drove real production volumes down by 0.3 per cent compared to the 0.4 per cent drop in nominal-dollar terms. Lower prices for wood products, primary metals and machinery contributed to the difference between the two. 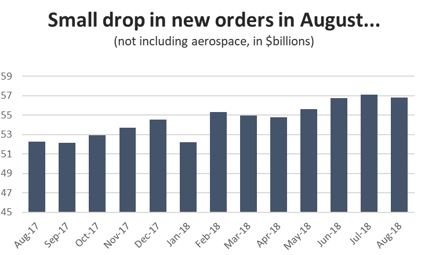 August also saw a mild softening in forward-looking indicators for the sector. New, non-aerospace, orders were down 0.5 per cent compared to July but, at $56.8 billion, were still at their second-highest level on record. On the bright side, however, the backlog of unfinished work continues to climb, suggesting that manufacturers will continue to be busy in the coming months. Unfilled orders (not including aerospace) were up 0.8 per cent compared to July, and are a remarkable 11.4 per cent highest than they were in August 2017. 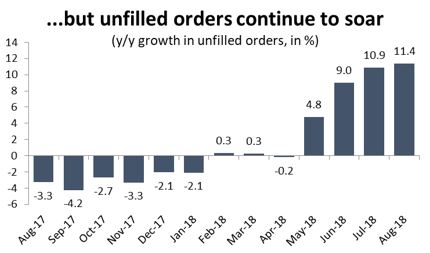 On an industry-by-industry basis, there were two main stories in Canadian manufacturing – a substantial decline in motor vehicles production; and a spike in aerospace deliveries which made back about half the difference. Motor vehicles and parts output fell 5.7 per cent compared to July ($479 million) – driven lower by an 8.3 per cent drop in production of completed vehicles. That decline pulled motor vehicles and parts production down to its lowest level since January. Meanwhile, aerospace shipments jumped 13.5 per cent ($244 million). Typically such increases are simply the result of production and delivery timing since airplanes are large, expensive and take a long time to make. September’s aerospace production figures will likely be considerably lower. 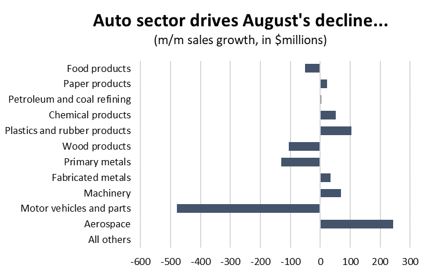 Aside from those two industries, output was relatively mixed. Sales of wood products, primary metals and food products were down compared to July. Meanwhile, production of plastics and rubber products, chemicals and machinery were all higher.

It basically goes without saying that if the auto sector drove manufacutring output lower in August, then at the provincial level, it was probably a bad month for Ontario. Indeed, manufacturing sales from that province plunged by $534 million (2.0 per cent) – more than double the nationwide decline. The consolation for Ontario manufacturers is that the drop in August effectively gave back the gains from a similar-sized jump the previous month. As a result, August’s manufacutring sales numbers for the province were about the same in August as they were in June. 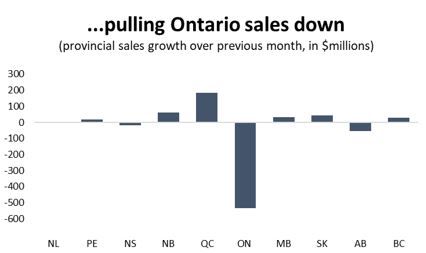 In the same way that a drop in auto production signals a bad month for Ontario, a spike in aerospace deliveries signals a good month for Quebec. Output from that province rose by 1.3 per cent in August and monthly sales broke past the $14.0 billion mark for the first time ever.

Elsewhere, August saw strong output gains in PEI (up 12.7 per cent), New Brunswick (3.7 per cent) and Saskatchewan (2.9 per cent). Nova Scotia (down 2.3 per cent) and Alberta (0.8 per cent) were the only provinces other than Ontario to see manufacturing output fall.