In spite of a host of trade-related challenges, the Canadian manufacturing sector continues to perform well as 2018 rolls along. Output levels are regularly climbing into new territory; demand remains strong; and businesses are unable to keep up with their backlog of orders.

Production was up by 0.9 per cent in July, marking the third consecutive month of healthy growth and the fifth increase in the last six months. With the bulk of the gains coming from the country’s manufacturing heartland in Ontario, the value of manufacturing output across Canada hit yet another monthly record in July – just north of $58.6 billion. 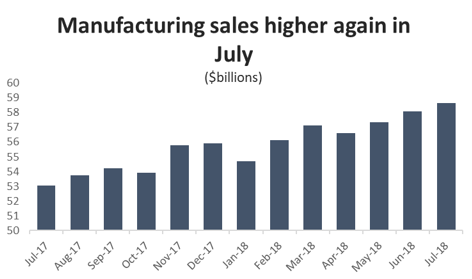 As sales continue to climb, the sector is building significant economic momentum into the second half of the year. July’s output levels are 10.5 per cent higher than they were at the same point last year. While that spike is as much about a poor showing 12 months ago as it is about strength today, it still marks one of the best year-over-year growth rates in recent memory. 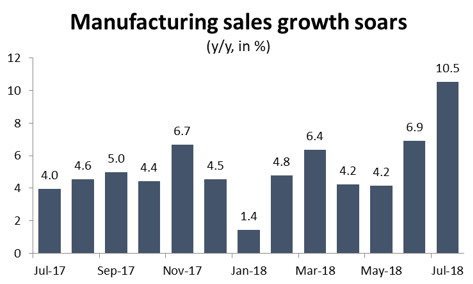 July’s increase was entirely the result of higher production levels as average sales prices remained flat. Led by chemicals, motor vehicles and rail stock, output volumes were up by 1.0 per cent compared to June.

On top of strong sales growth, forward-looking indicators continue to look good, suggesting that the recent runup in output will not taper off anytime soon. New non-aerospace orders were up 0.6 per cent in July and, at $57.1 billion, are about 10.6 per cent higher than they were at the same point last year. 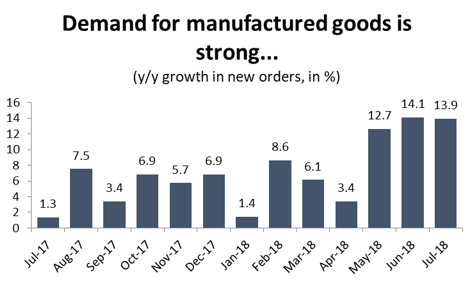 Canadian manufacturers have been unable to keep up with demand for their goods. Unfilled orders have been climbing steadily since January and businesses are now sitting on a work backlog valued at about $94.4 billion – about 11.3 per cent higher than a year earlier. 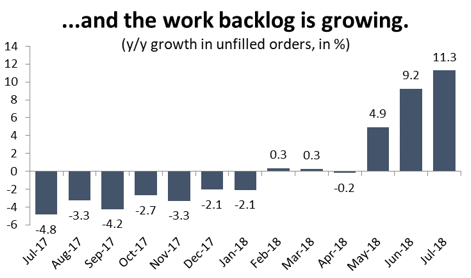 Although overall output growth was higher in July, results within the sector were somewhat mixed. Five specific industries saw notable increases in production, while sales were largely down elsewhere. Leading the way on the positive side was a healthy increase in motor vehicles and parts production as that industry slowly recovers from an unusually poor year in 2017. Autos and parts sales climbed by 2.4 per cent in July – an increase of about $200 million. There was a similar-sized increase in chemicals output in July, while sales were also stronger for petroleum and food products. Finally, there was a notable spike in rail car deliveries in July. It remains to be seen whether that was an isolated incident or evidence of a general increase in production levels. 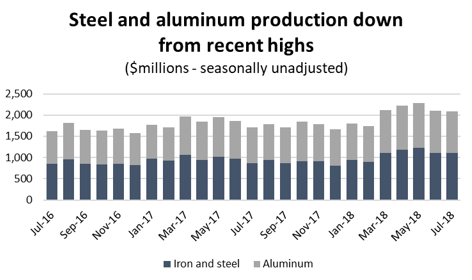 Graph showing that steel and aluminum production is down from recent highs. Manufacturing Sales Report, July 2018.

Production was down in most of Canada’s other major manufacturing industries. In particular, sales in the volatile aerospace sector were 5.6 per cent lower than in June. There were also declines in fabricated metals, plastics and rubber, and furniture production. 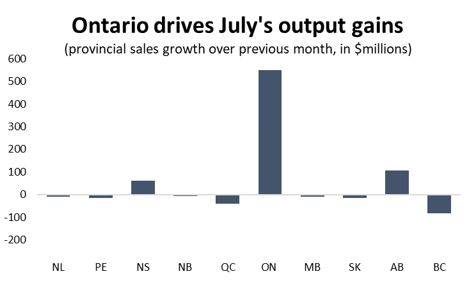 Elsewhere, manufacturing output was lower. The largest decline on a dollar-value basis was in BC, where sales fell by $83 million (1.7 per cent). The largest percentage decline was in PEI, where output plunged by nearly 10 per cent.