Canadian manufacturers built on the momentum from a strong February as widespread gains drove total production to a second all-time high in as many months. 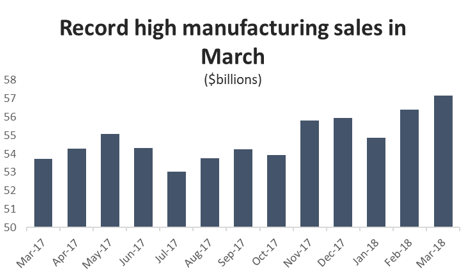 Making that feat all the more impressive, Statistics Canada’s release of March data on manufacturing sales included notable upward revisions to previous estimates. Overall manufacturing sales for 2017 were revised from $649 billion to $651 billion, and output levels in February were revised from $55.8 billion to $56.4 billion. In March, total manufacturing sales were up 1.4 per cent (from that higher base of $56.4 billion) to reach a new monthly record of $57.1 billion.
Sales growth in March was the result of a combination of volume and price effects. Real, price-adjusted manufacturing sales were up 0.6 per cent in March, building on a (revised) 2.2 per cent increase in February. The remainder of the increase in March was due to higher prices.
With one quarter of 2018 in the books, manufacturing activity is tracking well compared to last year. Sales activity through March is up 4.5 per cent compared to the first quarter of 2017.

Meanwhile, forward-looking indicators were steady in March. New, non-aerospace manufacturing orders were up 0.2 per cent which is not especially robust growth, but given that new orders surged by 5.4 per cent in February, the fact that they held steady the next month suggests strong continued demand for Canadian manufactured goods.
The only concerning note in terms of forward-looking indicators is that there has been a notable runup in manufacturing inventories since early 2016. Total inventories have risen by 13 per cent in that time and are now sitting at record levels ($79.2 billion). The reasons behind this accumulation are unclear, but it could signal a retrenchment in output levels later this year. 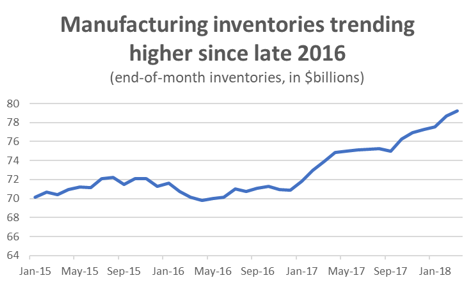 Output gains in March were relatively widespread across Canada’s major manufacturing industries. Seven of the country’s eleven largest industrial sectors posted gains – most of them significant. Leading the way was the aerospace sector where sales jumped by more than 10 per cent ($183 million) to reach $1.9 billion for the month. There were also notable increases in production of primary metals ($177 million), fabricated metals ($143 million) and wood products ($105 million). 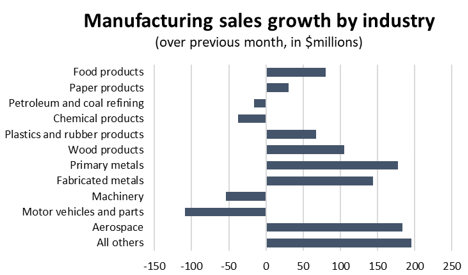 On the negative side, motor vehicles and parts production fell by 1.3 per cent in March ($109 million), giving back some of February’s gains. The auto sector has been one of the few weak spots in Canadian manufacturing recently; total sales in the first quarter of 2018 are down nearly 6 per cent compared to the same period last year. The other notable weak spot in March was machinery production, which has levelled off after a considerable run-up all of last year. Machinery sales were down 1.7 per cent in March ($54 million)
With the aerospace sector playing such an important role in March’s manufacturing output gains, it is unsurprising that Quebec was the provincial growth driver that month. Quebec manufacturing sales were up $382 million in March – a gain of about 2.9 per cent over February. There were also strong gains in Newfoundland and Labrador, as well as in Saskatchewan and all points west. Notably, BC sales jumped $175 million (4.0 per cent), erasing four consecutive months of declining output. 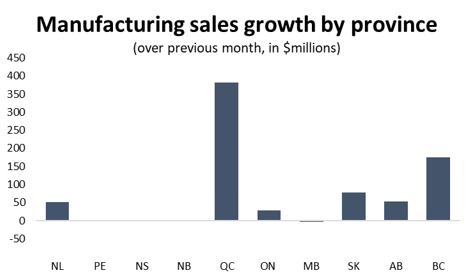 As noted above, through the first quarter of 2018, total manufacturing sales across Canada are tracking 4.5 per cent higher compared to the same period last year. At the provincial level, the story is one of remarkably strong year-over-year growth in every province except Ontario. All four Atlantic provinces are enjoying double-digit output growth, while Quebec and the four western provinces are all tracking between five and nine per cent higher compared to the first three months of 2017. Ontario, however, has been the anchor on Canadian manufacturing so far in 2018. Output in that province is up only 1.1 per cent compared to last year.

Graph showcasing that Ontario lags the rest of Canada so far in 2018. Manufacturing Sales Report, March 2018.