After a strong start to the year, Canadian manufacturing output growth has ground to a halt. Sales were down slightly in October and are effectively unchanged since June. However, an uptick in new and unfilled orders may help the sector break out of its rut in the coming months.

Manufacturing sales fell by 0.1 per cent in October, as growth in food, machinery and motor vehicles production was not quite enough to offset declines in wood products, primary metals, and aerospace. Total production that month was valued at $58.2 billion, down from a (revised) $58.3 billion in September. 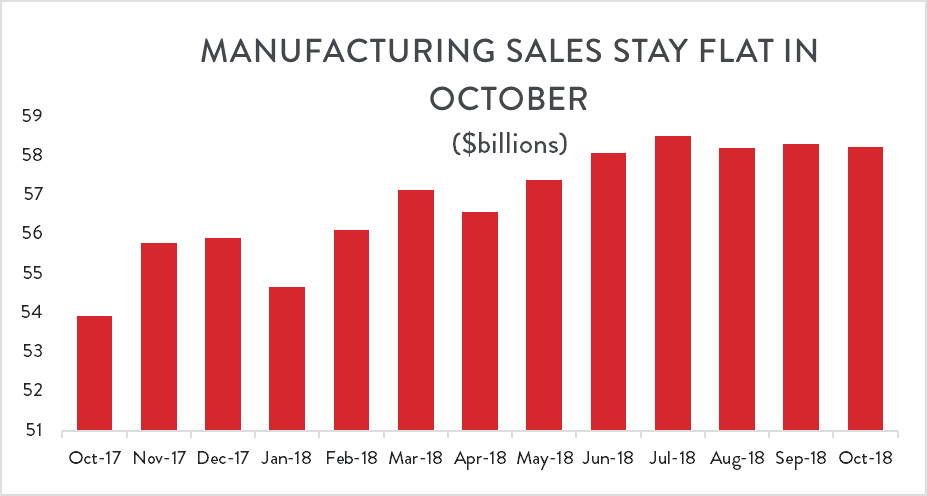 In spite of the flat performance since June, manufacturing sales output remains strong compared to last year. October sales were 8.0 per cent higher than they were 12 months prior, owing in large part to weak growth over the summer and into the fall of 2017. This growth rate is poised to fall dramatically next month, however. Not only did output levels jump in November of last year, but 2018 production values will likely be dragged down by the impact of the sharp drop in energy and other commodity prices. 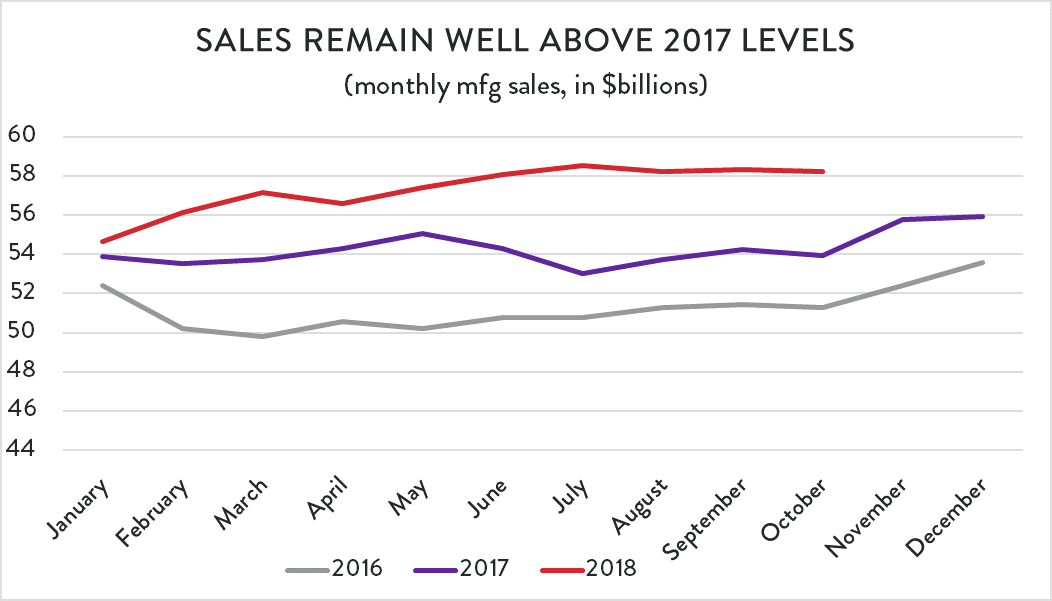 The month-over-month decline in manufacturing activity in October was largely the result of a weaker overall price environment. Production volumes were up by about 0.2 per cent, mostly because of a rebound in many of the industries where physical output dropped in September. Specifically, there was a strong recovery in production volumes in machinery and in clothing and textiles. Meanwhile, declining commodity prices weighed down the value of manufactured energy, primary metals and forest products.

While overall output levels are flat, the good news is that October saw a decided improvement in forward-looking indicators. After falling in August and September, new manufacturing orders rose by 2.4 per cent in October, on the strength of higher demand for transportation equipment, fabricated metals and food products. 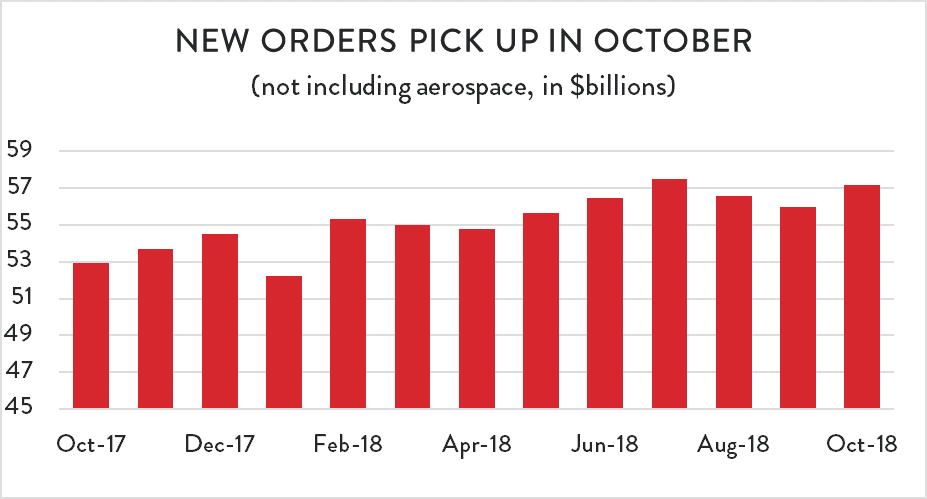 Unfilled orders were also higher in October. After putting a dent in their work backlog in September, manufacturers found themselves with even more on their plates the next month. Unfilled orders (not including aerospace) rose by 1.8 per cent to reach $43.4 billion – their highest level on record. 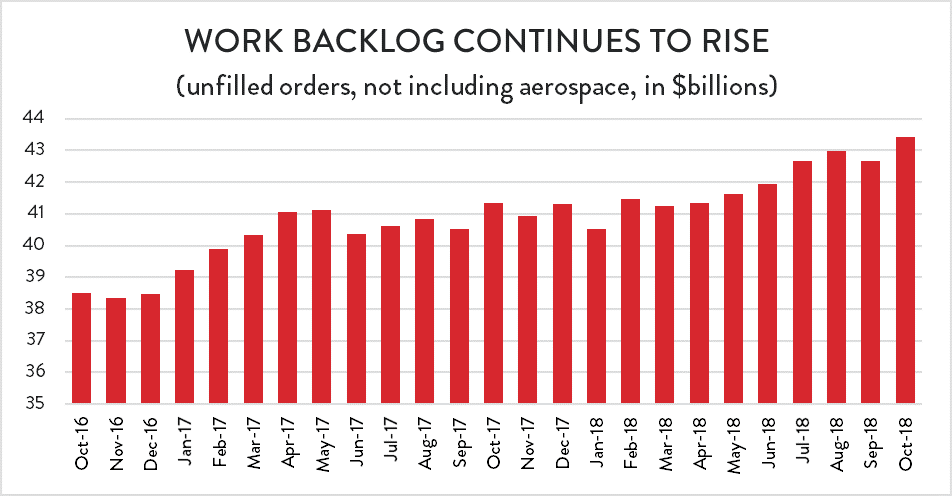 As noted earlier, the decline in overall output in October was driven by three industrial sectors – Wood products, primary metals and aerospace. In the first two cases, the decline was the result of a combination of lower production volumes and a considerable deterioration in the price environment. Wood products output fell by $214 million (7.5 per cent), marking the fifth consecutive month of decline; production has fallen by 15.7 per cent since May. Similarly, primary metals production was down 3.0 per cent ($129 million) 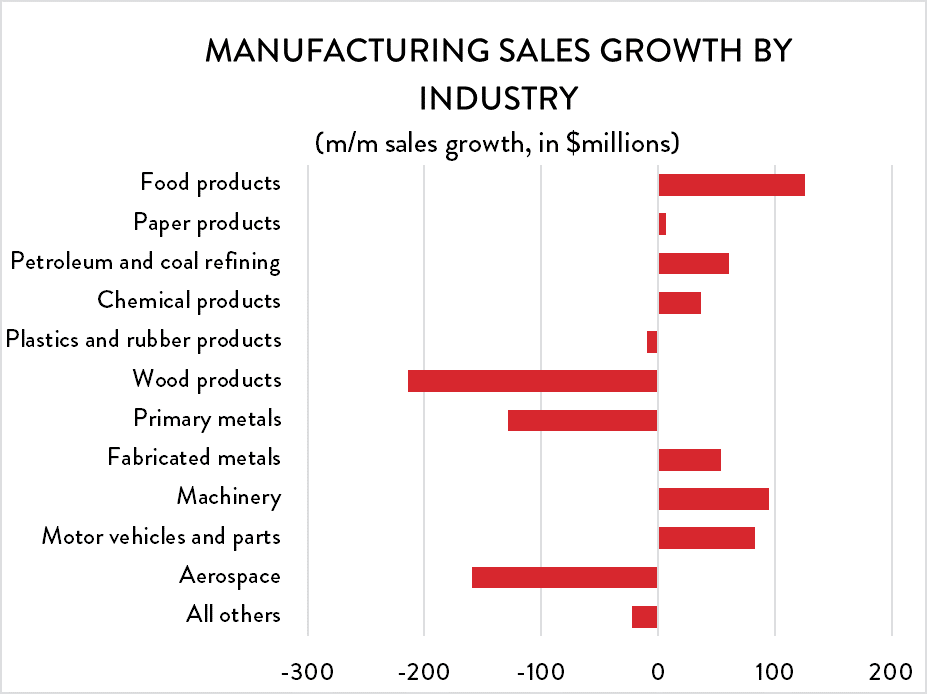 On the positive side, most of Canada’s other major manufacturing sectors posted gains in October. The largest increases were in food processing (up $126 million), machinery ($95 million), motor vehicles ($83 million) and petroleum refining ($61 million).

Looking across the country, manufacturing sales were higher in most provinces compared to September. On a percentage-growth basis, the largest increases were in Atlantic Canada. Output in Newfoundland and Labrador and PEI were both up by 5.4 per cent, while Nova Scotia enjoyed a 4.8 per cent increase. There were also solid gains in Saskatchewan and Manitoba. For its part, Ontario saw the largest increase on a dollar-value basis (up $178 million), but that large figure translates into a more modest-sounding 0.8 per cent growth rate. 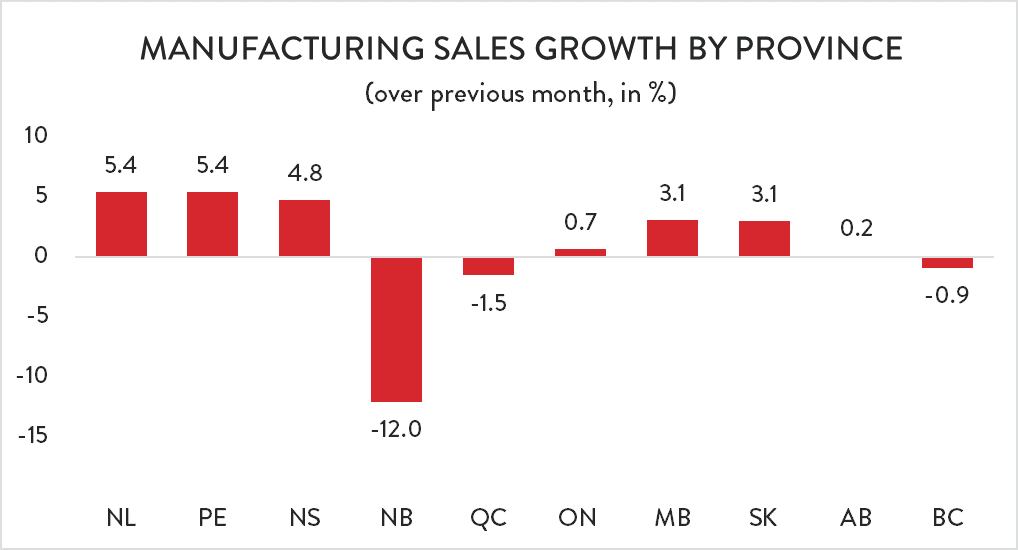 Gains in those provinces were countered by larger declines in Quebec and New Brunswick. Quebec manufacturing output fell by 1.5 per cent ($208 million), largely on weakness in aerospace production. In New Brunswick, the 12.0 per cent drop ($184 million) was the result of continued scheduled maintenance at the province’s oil refinery. There was also a more modest decline in manufacturing output in BC (0.9 per cent, or $40 million). That province has now seen manufacturing production fall in each of the last four months.