Thanks in large part to a strong recovery in motor vehicles and parts production, nominal-dollar manufacturing sales rebounded from April’s decline to hit a new all-time high in May.

All told, manufacturing output across Canada rose by a healthy 1.6 per cent, easily enough to overcome a modest production decline in April. With that increase, the total value of manufacturing sales nation-wide rose to $58.9 billion, exceeding the previous monthly high of $58.3 billion set last October. 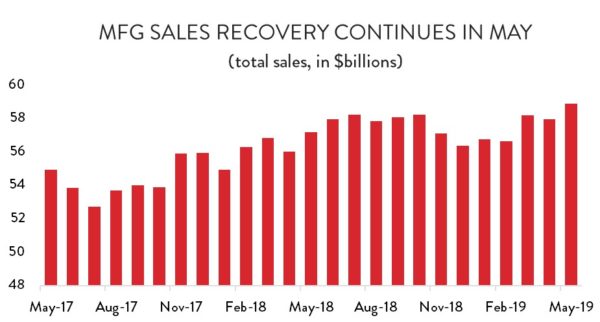 Even so, year-over-year sales growth remains sluggish. Strong output gains so far in 2019 are effectively running parallel to similar gains at the same time last year. As a result, sales levels in May are only about 3.5 per cent higher than they were 12 months ago. 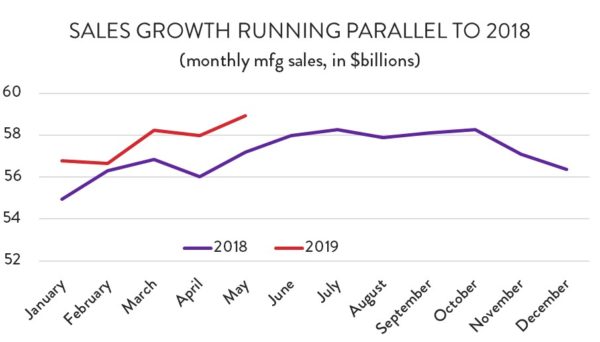 Demand for Canadian manufactured products appears to be picking up. New (non-aerospace) orders had fallen sharply in late 2018 as the Canadian economy slowed to a crawl and remained flat through a sluggish growth period in the early months of 2019. However, new orders jumped by 2.4 per cent in May – the first really solid gain in about eight months. 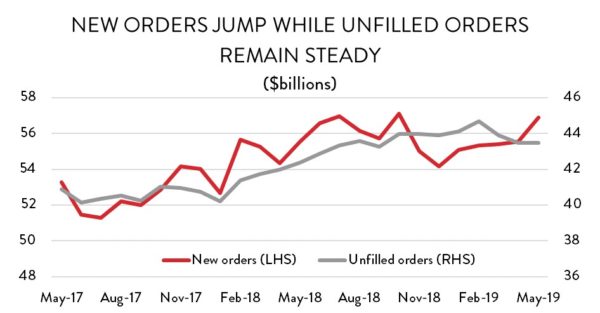 Meanwhile, there was little change in manufacturers’ backlog of unfinished work. Unfilled orders remained flat in May, sitting at about $43.5 billion.

While the auto sector was the clear growth driver in May, output gains were relatively widespread. Of Canada’s 11 major manufacturing subsectors, seven saw higher sales compared to April and only two were lower (paper and wood products output were effectively unchanged).

The increase in motor vehicles and parts production largely represented a recovery from an especially poor showing in April. The value of auto sector production fell from just under $8.3 billion in March to $7.7 billion in April – a decline of about 6.8 per cent. However, output jumped by 11.1 per cent in May, bringing total sales up to $8.5 billion – the highest level in almost two years. 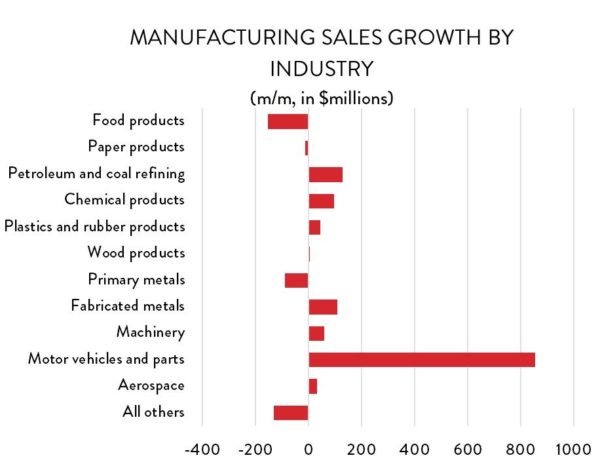 Elsewhere, gains were much smaller. Petroleum and coal refinery output rose by 2.0 per cent in May ($128 million), while fabricated metals ($108 million) and chemicals ($96.7 million) posted the next largest dollar-value increases.

On the negative side, Canada’s food processors gave back some of April’s gains, with sales falling by 1.7 per cent ($154 million) in May. Primary metals production was also lower, dropping by 2.1 per cent ($88.6 million).

At the provincial level, manufacturing activity was uneven in May. Given that Canada’s auto sector is heavily concentrated in Ontario, it comes as no surprise that that province posted the largest dollar-value growth compared to April. Provincial manufacturing output was up by $706 million compared to April (2.7 per cent), accounting for about three quarters of Canada’s overall gains.

However, on a percentage-growth basis, Nova Scotia was the clear winner. Manufacturing output in that province jumped by 12.5 per cent compared to April, reaching its highest level since the closure of the Dartmouth oil refinery in 2013. Newfoundland and Labrador, Manitoba and Alberta also posted solid increases in May. 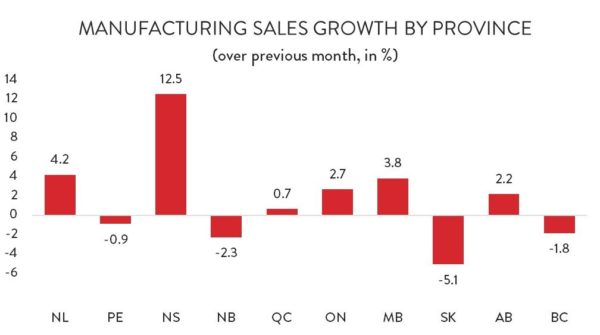 On the negative side, sales were down in BC and Saskatchewan as both provinces gave back the gains they made in April. New Brunswick also posted losses for the second month in a row.