After a modest rebound to start the year, manufacturing sales activity softened again in February as a recovery in petroleum refining was unable to offset weakness elsewhere.

Overall, manufacturing output across Canada was down slightly compared to January, falling by 0.2 per cent to reach $56.6 billion. The sector had started 2019 off strongly, posting its first month of solid growth since last July. Unfortunately, not only did output stagnate in February, but January’s growth figures were revised downward as well, erasing about half of the estimated gains that month. Manufacturing sales remain 3.2 per cent below their July peak. 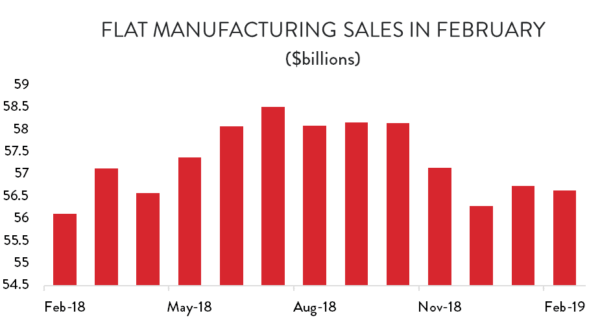 February’s decline in overall sales was driven by lower production volumes. Volume-based sales were down 0.5 per cent compared to January after rising by a (revised) 1.5 per cent the previous month. Since the decline in price-adjusted sales was larger than the decline in nominal sales, that suggests that prices for manufactured goods were stable in February. 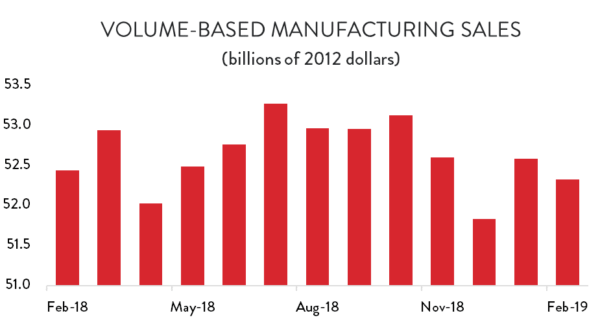 The largest increases in production volumes were in petroleum refining and paper products. Meanwhile, production was lower in most durable goods sub-sectors – especially in motor vehicles and parts.

Although output levels were flat, there were some positive signs in forward-looking manufacturing indicators in February. New, non-aerospace manufacturing orders were up for the second month in a row, rising by about 1.1 per cent compared to January. The value of new orders is still below last summer’s levels, but the recent increases point to stable overall demand. 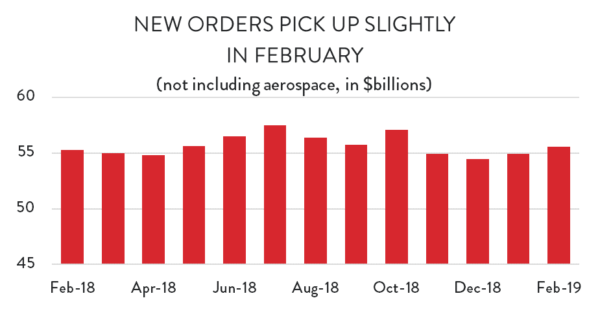 The rise in new orders contributed to a fairly substantial increase in the backlog of unfinished work in manufacturing. Unfilled orders continue to push into uncharted territory as businesses contend with record levels of uncompleted work. Unfilled orders were up 1.9 per cent in February (not including aerospace) to reach $44.4 billion. 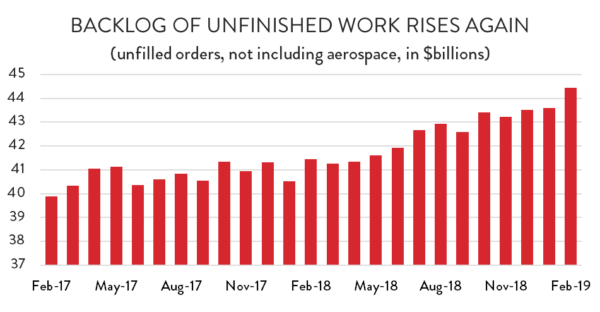 Looking at specific industries, results were mixed in February. Of the eleven major manufacturing sub-sectors, five were lower and six higher, while there were significant losses in some of Canada’s smaller industries.

On the positive side, there was a solid recovery in petroleum refinery output. Production of gasoline and other petroleum products were up 7.1 per cent compared to January – an increase of about $376 million. However, the value of refinery output has a long way to go before it returns to last fall’s levels; even with that increase, output remains 16.6 per cent below October levels. 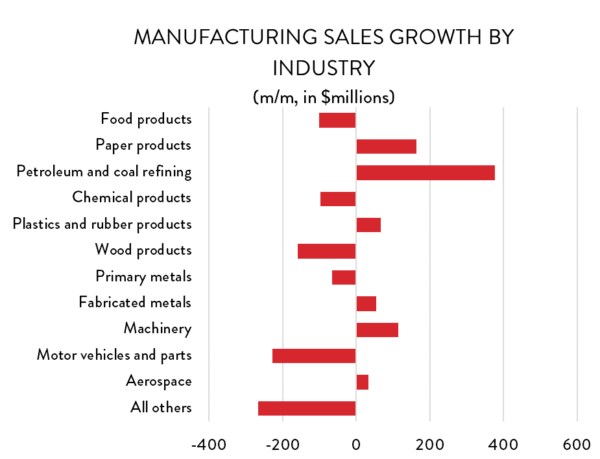 There was also a solid recovery in paper production in February. Output was 6.8 per cent higher compared to the previous month – enough to erase January’s losses. Meanwhile, there were healthy gains in machinery sales (3.3 per cent), as well as plastic and rubber products (2.4 per cent) and fabricated metals (1.5 per cent).

On the negative side, motor vehicles and parts production was down for the third time in four months, falling by 2.8 per cent ($229 million). With total sales of $7.9 billion in February, auto sector activity is 12.6 per cent below its recent high of $9.1 billion in May of 2017. There were also notable declines in wood products industries (5.9 per cent), as well as primary metals (1.6 per cent), chemicals (2.2 per cent) and food products (1.1 per cent). Sales were also down in some of Canada’s smaller manufacturing industries, including furniture, electrical equipment and appliances, non-metallic mineral products, and clothing and textiles.

Looking across the country, output was lower in most provinces, but a strong showing in Quebec and New Brunswick was enough to offset most of the losses. In Quebec, manufacturing production was up by 3.7 per cent ($508 million) – a strong rebound from a poor showing in January. While output values for Canada as a whole are below last summer’s peak, Quebec’s manufacturing sector is producing at record levels ($14.2 billion in February).

Meanwhile, a recovery in petroleum production caused manufacturing output in New Brunswick to jump by 7.7 per cent ($100 million), building on a solid showing in January. However, those gains recover just a small fraction of recent declines in that province. Manufacturing sales remain 24 per cent below their recent peak of $1.9 billion in November 2017. Output was also higher in PEI and essentially unchanged in Alberta.

Elsewhere, the news was negative. On a dollar-value basis, the largest decline was in Ontario where, once again, weakness in the auto sector dragged provincial output lower. Manufacturing sales in Ontario fell by 1.7 per cent ($441 million) in February and have been trending downward since July. On a percentage basis, there were steep declines in Nova Scotia (7.0 per cent) and Saskatchewan (6.3 per cent). Also of concern is continued weakness in BC. Manufacturing sales in that province were up in January for the first time in six months but fell back again in February.