Canadian merchandise exports decreased 1.0% to $50.2 billion in April, while merchandise imports fell an even steeper 4.7% to $49.6 billion. Despite the decline, exports were still 5.0% above the pre-pandemic level, but imports were 1.4% below this threshold. In volume terms, the picture was even less encouraging: real exports and real imports were down 3.5% and 6.8%, respectively. 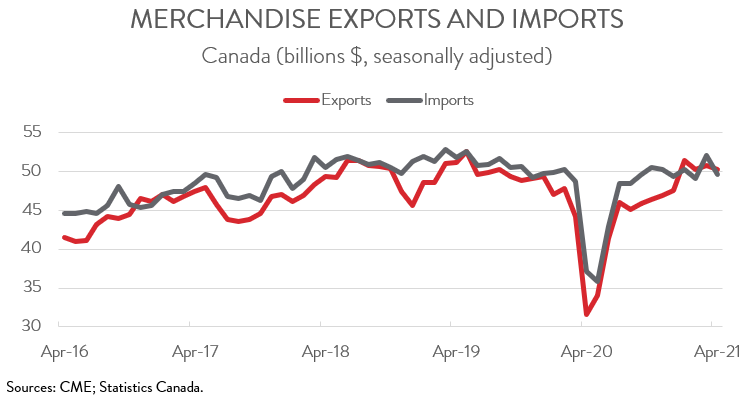 The decline in Canada’s two-way trade in April was largely the result of production shutdowns in the auto sector, which continues to be hampered by the global shortage of semiconductor chips. Excluding the motor vehicles and parts industry, exports rose 1.6% in April. Looking ahead, the combination of rising demand from the U.S. and higher commodity prices should boost Canada’s export growth over the coming months, but this bright outlook is clouded by ongoing global supply chain disruptions. 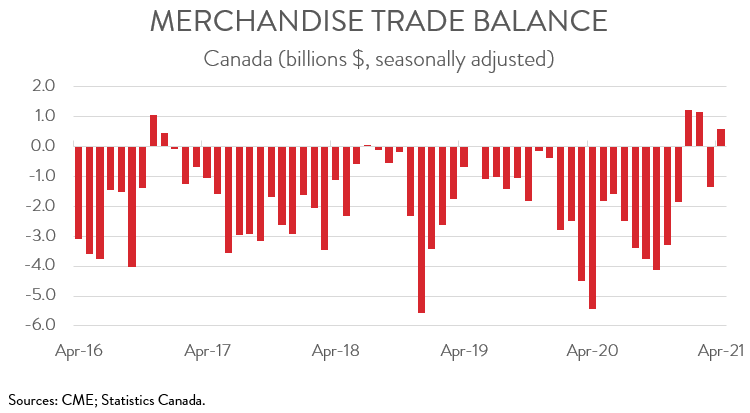 The decline in exports spanned 6 of 11 major commodity groups. Exports of motor vehicles and parts plummeted 18.1% to $5.5 billion in April, with car makers forced to reduce or stop production due to the ongoing global microchip shortage. Excluding the pandemic lows of April and May 2020, this was the lowest level of exports since January 2014.

Exports of energy products fell 2.5% to $9.3 billion, down for the second month in a row. Despite these back-to-back declines, energy products were still 18.6% above the pre-pandemic level of February 2020.

Exports of consumer goods provided a partial offset, jumping 14.4% to $6.8 billion in April. As noted by Statistics Canada, the rise was largely attributable to a surge in exports of prepared and packaged seafood products. To reduce the risk for the endangered North American right whales, the snow crab season opened almost one month earlier this year, leading to a substantial increase in exports of crab in April.

At the same time, the forestry sector stayed hot, with exports of forestry and related products rising 4.4% to $4.7 billion. This category has experienced the strongest post-COVID trade recovery, with its exports 40.0% above the February 2020 level. 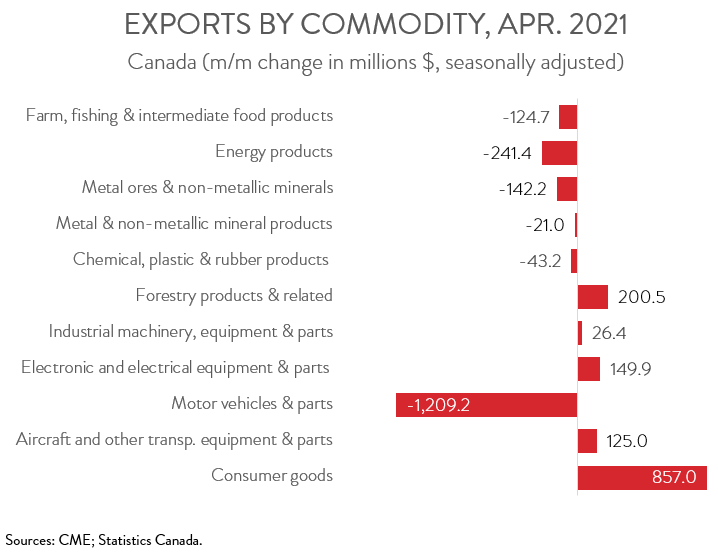 After declining by 3.0% in March, Canada’s exports to the United States climbed 1.4% to $37.1 billion in April. Unfortunately, this was more than offset by lower exports to the rest of the world, which were down 7.2% to $13.1 billion. Among Canada’s major non-US trading partners, the results were mostly negative in April. In fact, only exports to the EU and Japan were up on the month, while exports to the UK, China, Mexico, and South Korea were down. The decrease in exports to the UK was attributable to lower shipments of gold. 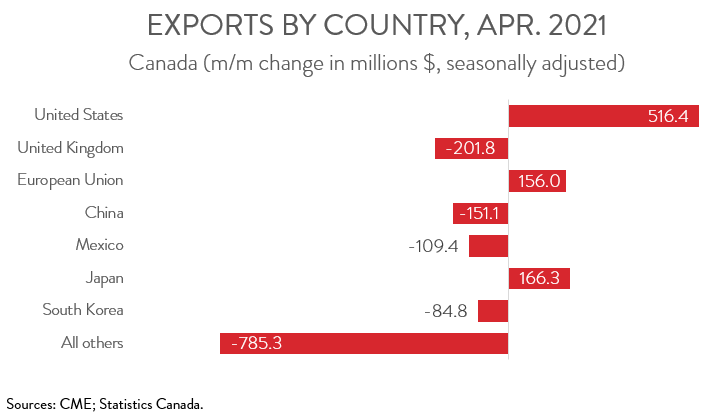