MERCHANDISE EXPORTS FALL 1.6% IN MAY

Canadian merchandise exports fell 1.6% to $49.5 billion in May, while merchandise imports rose 2.1% to $50.9 billion. Despite being down for the second month in a row, exports remained 3.6% above the pre-pandemic level. Meanwhile, the increase in May pushed imports 1.2% above this threshold. In volume terms, the picture was even less encouraging: real exports were down 3.1%, while real imports were up 2.5%. 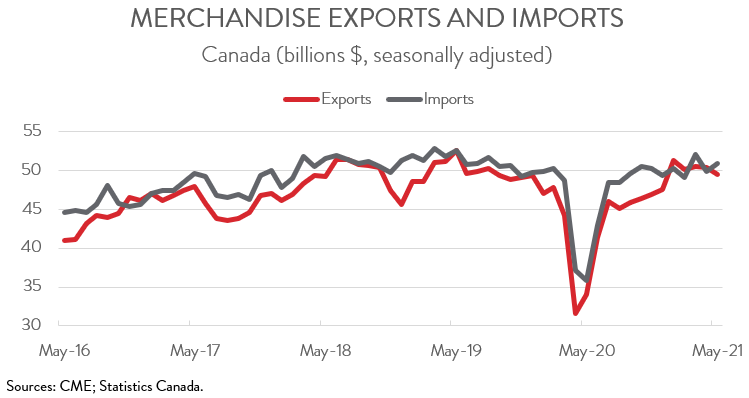 Canadian merchandise exports have now fallen in three of the last four months, although the most recent decline was partly attributable to a rising loonie. In fact, when expressed in U.S. dollars, exports rose 1.4% in May. As well, Canada’s two-way trade activity continues to be held back by automotive production shutdowns, as the sector grapples with ongoing shortages of semiconductor chips. Fortunately, the global economy is expected to stage a robust recovery as the pandemic recedes, portending better days ahead for Canada’s exporters, although supply chain woes are clouding the outlook. 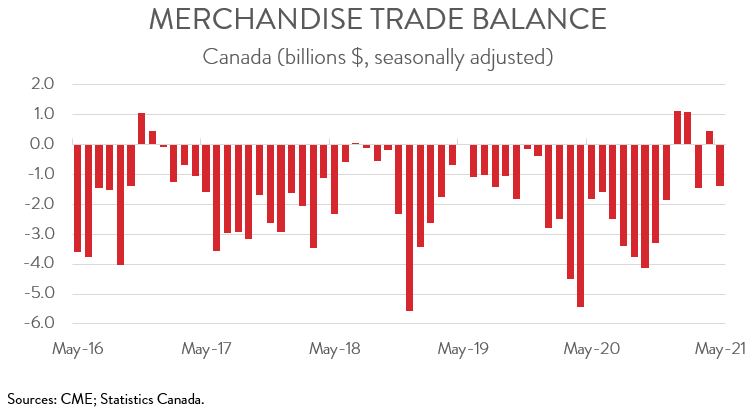 Even though the global semiconductor chip shortage eased slightly in May, exports of motor vehicles and parts still fell 5.8%, the seventh decline in eight months. According to Statistics Canada, other factors accounted for May’s decline, including exchange rate effects and the fact that a larger share of production was destined for the Canadian market instead of abroad in May. 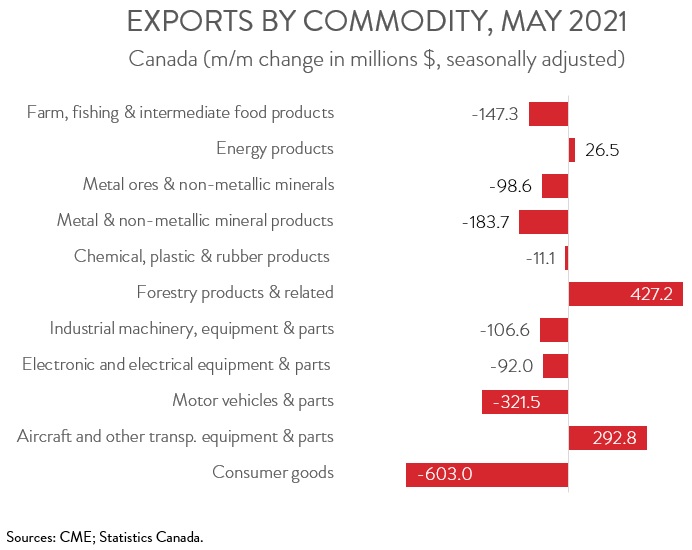 On the positive side of the ledger, exports of forestry products rose 8.9%, hitting a record of $5.2 billion in May. The gain was driven mainly by higher exports of lumber, on the strength of higher prices. The value of lumber exports has almost tripled in the past year because of rising prices, driven higher by the combination of robust demand and inadequate supply. However, there are signs that these trends are finally reversing. Lumber futures plunged more than 40% in June, suffering their worst month on record dating back to 1978. Prices are down for two reasons. First, Americans have started to go on vacations again instead of taking on renovation and building projects. Second, sawmills have been ramping up production.

Exports of aircraft and other transportation equipment and parts also posted a healthy increase in May, up 14.0% to $2.4 billion, building on the 8.4% gain seen in April.

EXPORTS TO THE U.S. AND TO THE REST OF THE WORLD FALL

Canada’s exports to the U.S. fell 1.1% to $36.8 billion in May, down for the second time in three months. At the same time, our exports to the rest of the world decreased 3.0% to $12.8 billion, mainly on lower exports to the U.K. Among Canada’s other major non-U.S. trading partners, exports to Japan and Mexico were also down on the month, while exports to the E.U. and South Korea were up. Exports to China remained relatively stable. 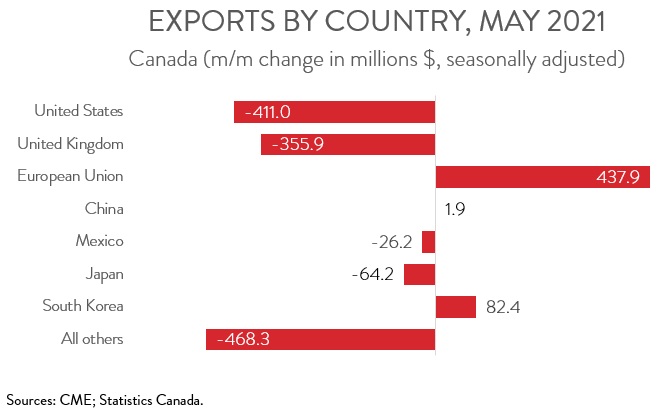