Canadian merchandise exports rose 6.4% to a record high of $56.2 billion in October, while merchandise imports climbed 5.3% to $54.1 billion. Exports received a big lift from higher prices, as export volumes climbed by a more moderate 2.8%. Import volumes increased at a much faster pace of 7.0%. 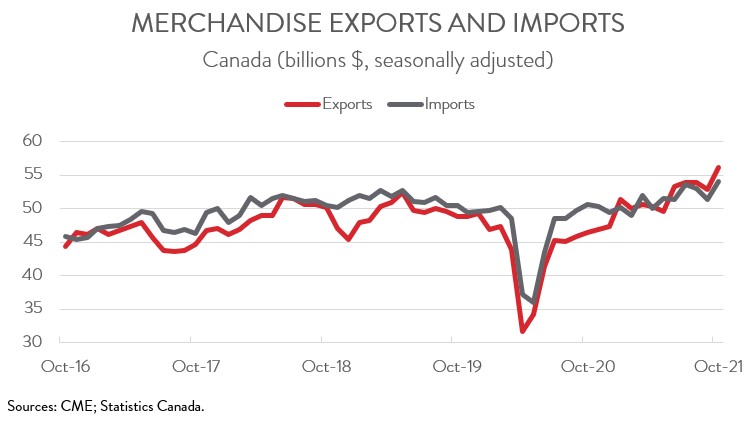 This was a solid report, and it lines up with other recent data releases suggesting that the Canadian economy got off to a strong start in the fourth quarter. That said, the November merchandise trade numbers are likely to be severely impacted by the transportation disruptions caused by the devastating B.C. floods. And, while the ongoing global recovery bodes well for Canada’s trade outlook, significant downside risks remain, including those arising from the emerging Omicron variant.

Canada’s merchandise trade balance remained in a surplus position for the fifth straight month, widening from $1.4 billion in September to $2.1 billion in October. As a result, Canada is on track to record its first annual surplus since 2014.

Breaking these data down, Canada’s trade surplus with the U.S. narrowed marginally from $8.4 billion in September to $8.3 billion in October, while our trade deficit with the rest of the world narrowed from $7.0 billion to $6.2 billion over the same period. 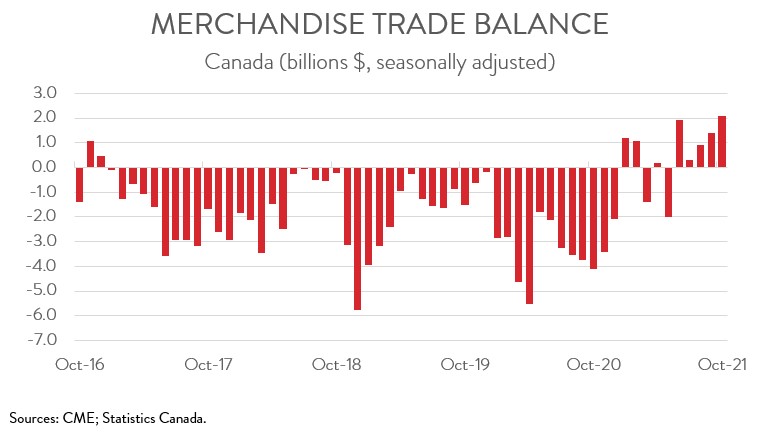 While exports increased in 8 of 11 product categories, the combined gains in exports of motor vehicles and parts and energy products accounted for almost 80% of the total growth. After declining by 18.1% in September, exports of motor vehicles and parts increased 30.8% to $6.1 billion in October, as supply constraints related to the ongoing global semiconductor shortage eased somewhat.

Exports of energy products increased for the sixth straight month in October, rising 9.8% to reach a record high of $13.9 billion. Crude oil exports made the largest contribution to growth, thanks to higher prices. Exports of coal also reached a record high, as coal prices have more than doubled since July. However, coal exports likely declined in November, given that Canada exports most of its coal through the Port of Vancouver.

Exports of farm and fishing and intermediate food products climbed 5.6% to $4.1 billion in October, up for the second month in a row. Exports of canola more than doubled in October, rebounding from two weak months. However, like coal, canola is another commodity that is predominately shipped from Vancouver terminals. 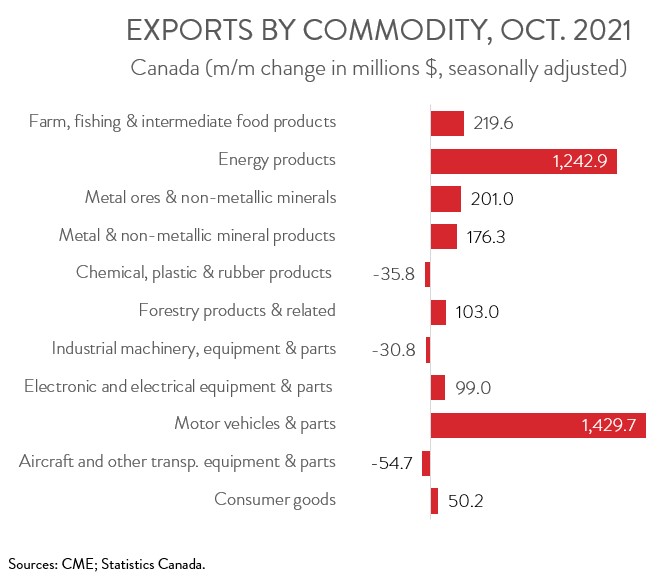 Exports to the U.S. increased 6.9% to a reach a record high of $42.2 billion in October. Imports from the U.S. were also up strongly. Both increases were largely influenced by the rebound in trade of motor vehicles and parts. 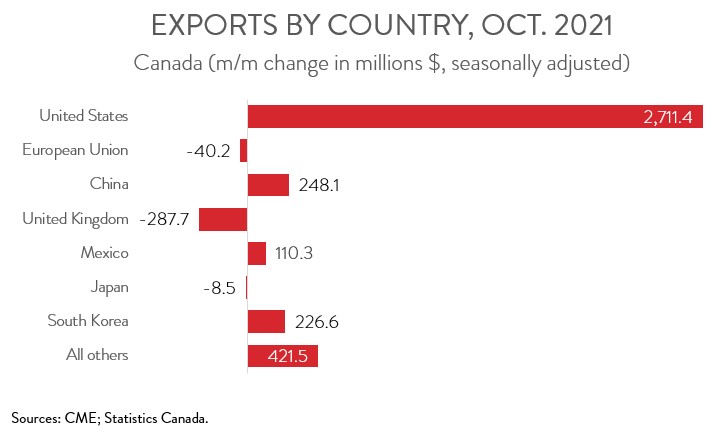