EXPORTS AND IMPORTS BOTH INCREASE IN NOVEMBER

Canadian merchandise exports rose 3.8% to $58.3 billion in November, while merchandise imports climbed 2.4% to $55.4 billion. In volume terms, the picture was still strong: real exports and real imports were up 3.5% and 0.8%, respectively. 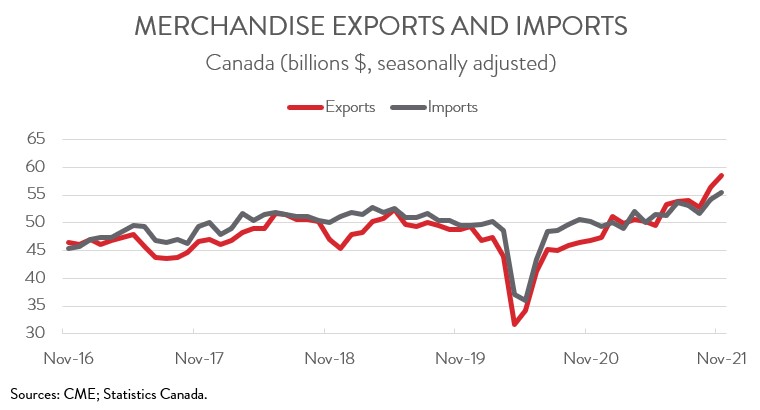 Canada’s exports and imports were stronger than expected in November, as record high exports to the U.S. more than offset disruptions to international shipping caused by the devastating BC floods. However, trade activity is likely to be bumpy over the near term. While global demand for goods is expected to remain strong, manufacturers continue to grapple with supply chain disruptions and labour shortages that are only being exacerbated by the Omicron variant.

Canada’s merchandise trade balance remained in a surplus position for the sixth straight month, widening from $2.3 billion in October to $3.1 billion in November, the highest since 2008. With just one reporting month left for 2021, Canada is set to record its first annual surplus since 2014. 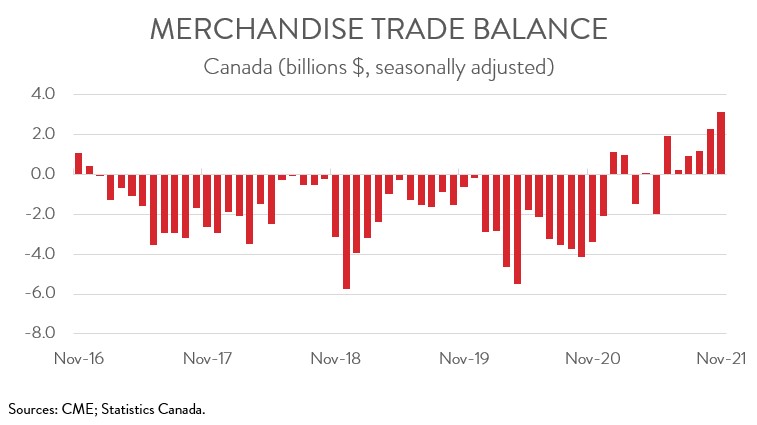 The increase in exports was widespread, spanning 8 of 11 product categories. Exports of consumer goods contributed the most to growth, rising 9.0% to $7.3 billion. The increase was mainly attributable to higher exports of pharmaceutical products. As noted by Statistics Canada, a large shipment of COVID-19 medication was imported into Canada for packaging and labelling, and most of it was subsequently exported.

Exports of basic and industrial chemical, plastic and rubber products increased 14.7% to $3.8 billion in November. All subcategories posted gains, with exports of lubricants and other petroleum refinery products being the main growth driver.

Exports of energy products increased for the seventh straight month in November, rising 2.8% to reach a record high of $14.7 billion. Higher exports of crude oil and of refined petroleum energy products more than offset lower exports of coal and of natural gas. The decline in coal exports was attributable to the BC flooding.

Finally, exports of forestry products and building and packaging materials were up 6.7% to $4.5 billion in November. The increase was mainly driven by higher exports of lumber and other sawmill products and of asphalt (except natural) and asphalt products. 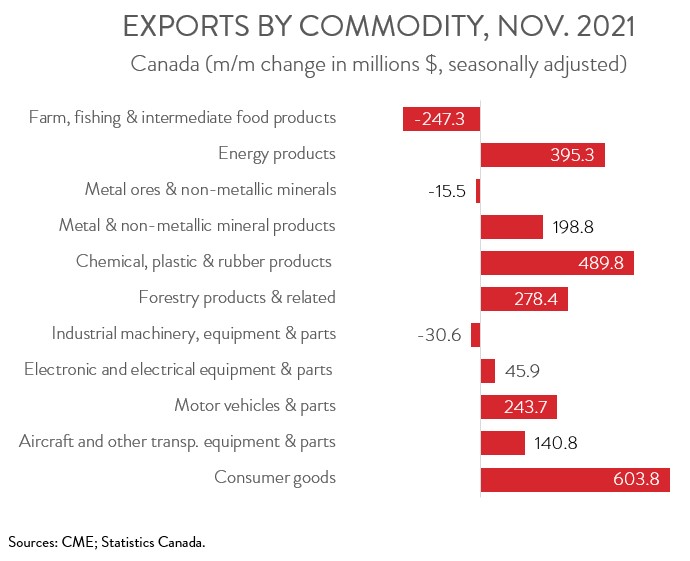 Among Canada’s major non-U.S. trading partners, exports to the United Kingdom and South Korea were up, while exports to China, the European Union, Japan, and Mexico were down. The decline in exports to China was attributable to lower exports of coal and of farm and fishing products. 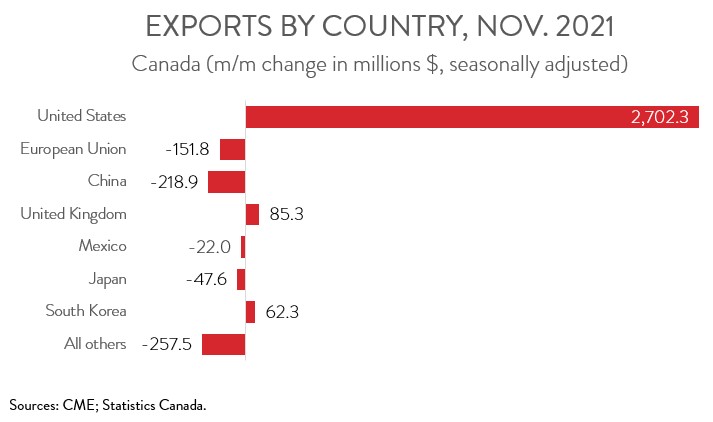