EXPORTS STAY ON UPWARD TREND WHILE IMPORTS EDGE DOWN

Canada’s merchandise exports rose 4.1% to $68.4 billion in May. This was the fifth consecutive monthly increase and the tenth gain over the past twelve months. On the other hand, imports decreased 0.7% to $63.1 billion, down for the first time in four months. Imports from China fell sharply, reflecting the fallout from COVID-19 lockdowns in key manufacturing hubs. 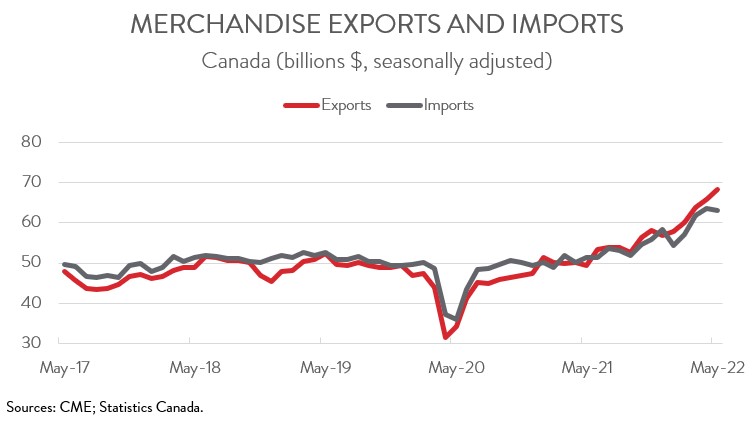 Canada’s exports and trade surplus continue to be buoyed by higher prices, especially for commodities. Unfortunately, the country’s export performance has been much less impressive when viewed in real terms. Since the beginning of 2022, the value of exports has risen by more than 20%, but export volumes are down 2.3%. 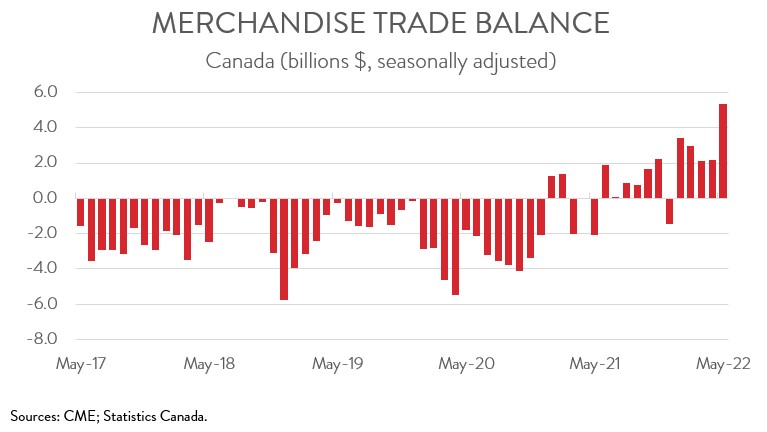 INCREASE IN EXPORTS DRVIEN BY CRUDE OIL AND AIRCRAFT

The increase in nominal exports was widespread, spanning 8 of 11 product categories. Exports of energy products contributed the most to the growth, rising 5.7% to $20.4 billion in May. Export prices for crude oil have nearly doubled since May 2021, with recent gains triggered by the Russian invasion of Ukraine.

Exports of metal ores and non-metallic minerals rose 17.2% to a record high of $3.1 billion in May. Exports of potash led the increase, partly because of a large gain in exports to Brazil. Countries are turning to Canada to replace fertilizer products that they normally purchase from Russia, which has been hit by severe sanctions. Exports of copper ores and concentrates also experienced a notable increase in May, mainly on higher exports to South Korea.

On the downside, exports of motor vehicles and parts fell 3.8% to $6.7 billion in May, the first decline in four months. This could be a worrying sign of renewed supply chain issues. 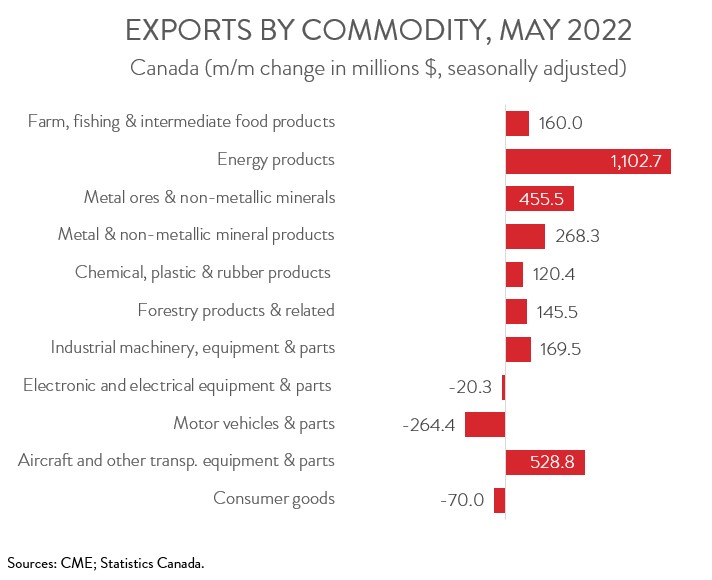 CANADIAN EXPORTS TO THE U.S. INCREASE FOR FIFTH STRAIGHT MONTH

Exports to the U.S. climbed 2.4% to $52.9 billion in May, up for the fifth month in a row. At the same time, exports to the rest of the world jumped 10.6% to a record high of $15.5 billion. Among Canada’s major non-U.S. trading partners, exports to the U.K., the EU, Japan, and South Korea were up, while exports to Mexico and China were down. The increase in exports to the U.K. was driven by higher exports of crude oil and gold. 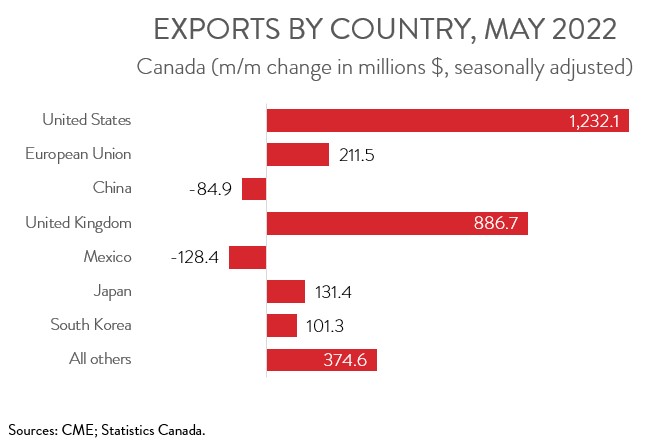