Exports Rise in September, Boosted by Wheat and Crude Oil as Well as a Weaker Dollar

EXPORTS AND IMPORTS RISE FOR FIRST TIME IN THREE MONTHS

Merchandise exports rose 1.3% to $66.4 billion in September, while merchandise imports climbed 0.4% to $65.2 billion, both up for the first time in three months. In real or volume terms, exports increased 1.7% while imports fell 0.8%. 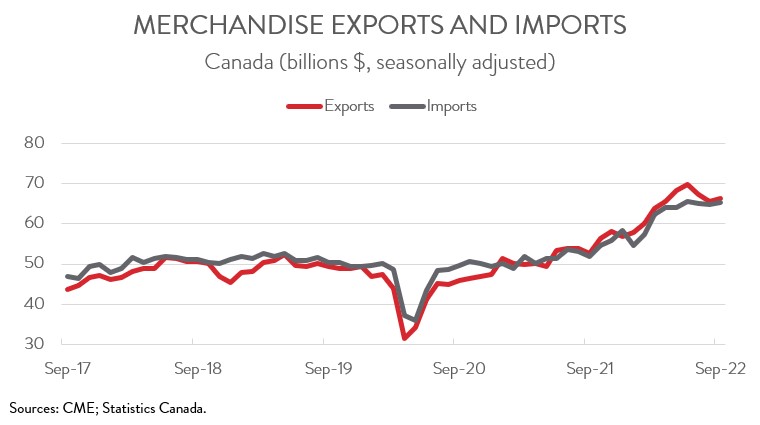 Notably, a depreciating loonie provided a lift to trade activity in September, as the Canadian dollar posted its biggest monthly drop versus the U.S. dollar since the beginning of the pandemic. In fact, when expressed in U.S. dollars, Canadian exports and imports were down 1.7% and 2.5%, respectively, in September.

In volume terms, net trade was a large positive contributor to GDP growth in the third quarter, with real exports up 3.3% and real imports down 0.8%.

Looking ahead, the near-term outlook for manufactured goods exports is mixed. While foreign demand for factory-made goods will be weighed down by a slowing global economy, this should be somewhat offset by an easing in supply chain bottlenecks. 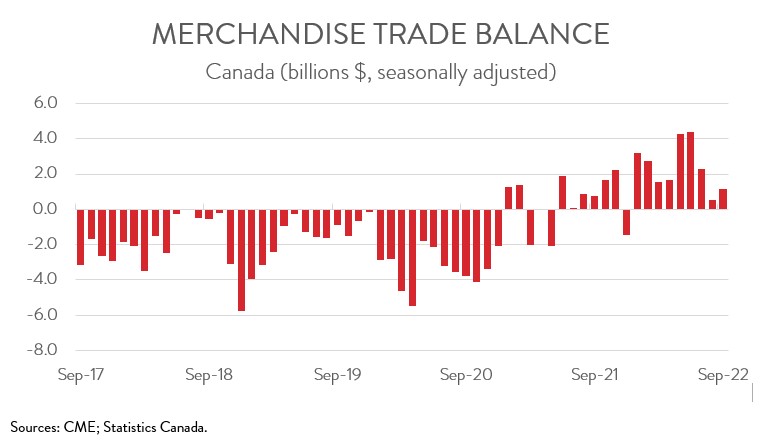 The increase in exports spanned 6 of 11 product categories. Exports of farm fishing and intermediate food products contributed the most to the overall increase in exports in September, rising 16.7% to an all-time high of $4.9 billion. The gain was driven by a two-thirds increase in wheat exports and a near doubling of canola exports. Thanks to favourable growing conditions, Western Canada is looking at a bumper crop.

After plunging in July and August, exports of energy products increased 1.9% to $18.8 billion in September. Crude oil exports contributed the most to the growth, mainly on higher volumes, as prices declined for the fourth month in a row. Natural gas exports also rose in September, but coal exports fell.

On the negative side, exports of metal ores and non-metallic minerals fell 11.4% to $2.7 billion in September. The decline was attributable to lower exports of potash. But, despite this decline, potash exports have more than doubled since September 2021, with the war in Ukraine and sanctions on Russia boosting both prices and demand.

In more bad news, exports of forestry products and building and packaging materials decreased 4.9% to $4.7 billion in September. The decline was driven by lower exports of lumber and other sawmill products, down for the fifth time in six months. As noted by Statistics Canada, softwood lumber prices have been on a downward trend since the spring, with North American housing market activity slowing in response to higher interest rates. 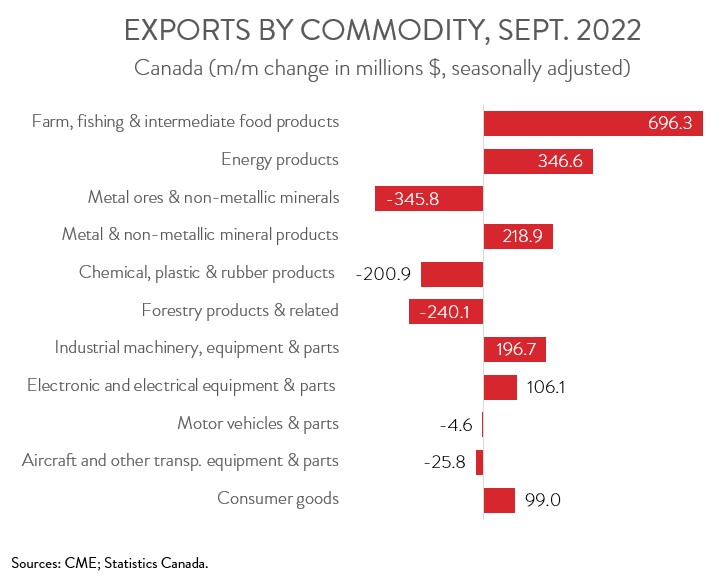 EXPORTS TO THE U.S. FALL FOR THIRD MONTH IN A ROW 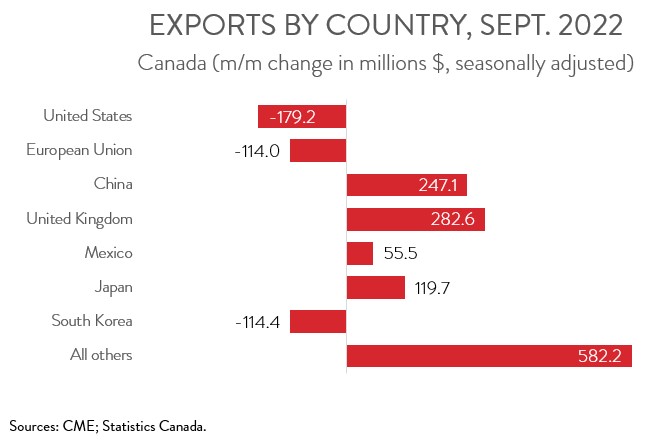