Canada’s Trade Balance Swings into Deficit in November, as Both Exports and Imports Fall

EXPORT AND IMPORT VALUES AND VOLUMES DROP IN NOVEMBER

Merchandise exports declined 2.3% to $64.4 billion in November, while merchandise imports fell 2.1% to $64.4 billion. In real or volume terms, the picture was similarly downbeat, with exports and imports down 1.5% and 0.7%, respectively. 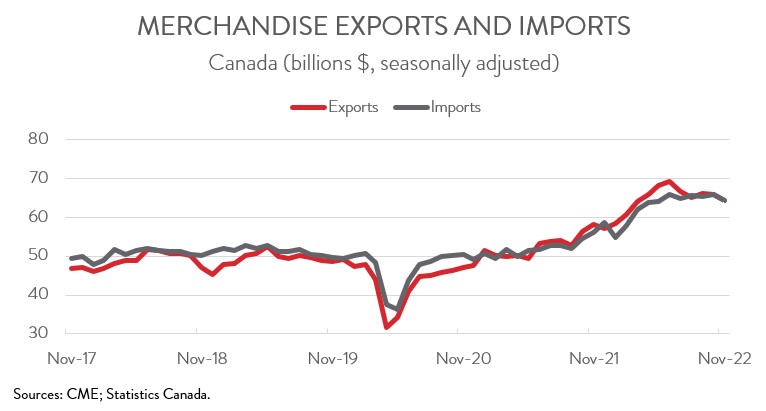 While a depreciating Canadian dollar has provided a lift to trade activity in recent months, a stronger loonie put downward pressure on trade values in November. Indeed, when expressed in U.S. dollars, Canadian exports and imports were down a much more modest 0.5% and 0.2%, respectively, in the penultimate month of 2022.

While November’s decline in nominal exports largely reflected lower energy prices, a stronger dollar, and a few one-off factors, the drop in import and export volumes could stem from weakening domestic and global demand.

Canada’s merchandise trade balanced moved from a surplus of $130 million in October to a modest deficit of $41 million in November. Breaking these data down, our trade surplus with the U.S. narrowed for the sixth consecutive month, moving from $8.6 billion in October to $7.3 billion in November. At the same time, our trade deficit with the rest of the world narrowed from $8.4 billion to $7.3 billion. 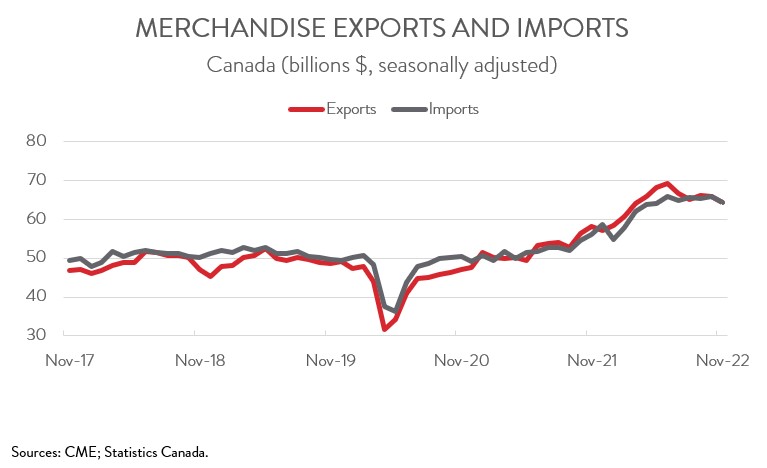 The decrease in exports was widespread, spanning 8 of 11 product sections. Exports of energy products fell 4.7% to $16.3 billion, the fifth consecutive monthly decline. Notable drops were observed in several sub-categories, including in coal, natural gas, crude oil and bitumen, and refined petroleum energy products.

Exports of consumer goods decreased 6.3% to $7.2 billion in November, largely erasing the previous month’s gains. The decline was broad-based across the product section, with the most pronounced drops coming in pharmaceutical and medicinal products and meat products.

Motor vehicle and parts exports fell 6.4% to $6.1 billion in November, down for the third time in four months. Statistics Canada attributed the decrease to a sharp drop in exports of engines and parts that coincided with lower U.S. auto production.

Finally, exports of metal ores and non-metallic minerals decreased 13.3% to $2.7 billion in November. Most notably, exports of copper ores and concentrates fell to their lowest level since April 2011, due in large part to shipping delays. But given that these delays are temporary, exports from this subsector will likely rebound in the coming months.

On the positive side, metal and non-mineral products exports jumped 11.9% to $7.2 billion in November, largely offsetting the sharp decline observed in the previous month. The increase was driven by higher exports of unwrought gold, silver and platinum group metals and their alloys.

As well, exports of farm, fishing, and intermediate products increased 6.7% to an all-time high of $ 5.9 billion in November. Agricultural exports have increased by an impressive 42.5% over the last six months, attributable to last year’s bumper crop, strong global demand, and high prices. 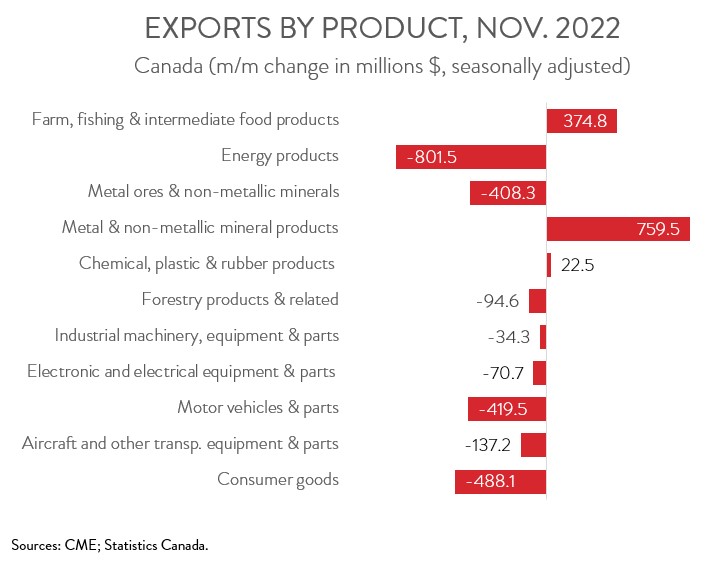 EXPORTS TO THE U.S. FALL FOR THE FIFTH STRAIGHT MONTH 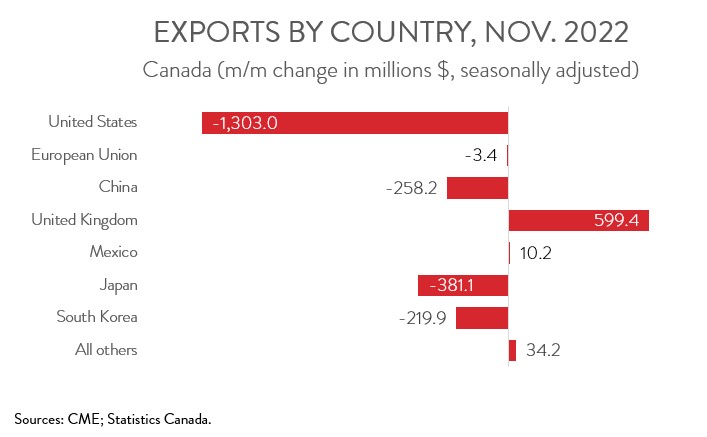